“I think we should think of the CIA as a national asset that must be preserved as a vital part of our defense system. . . It is important that the American people understand the intricate job the CIA is doing in an increasingly complex world. It is essential we have the support of the American People.”

“George H.W. Bush led a life of exemplary public service, integrity, and determination—in WWII, in Congress, as UN Ambassador, Envoy to China, CIA Director, and as Vice President & President. A life very well lived; an American who made us all proud. May he rest in eternal peace.”

“We’ve lost a great champion of the Agency—an accomplished Director, faithful advocate, and dear friend—with the passing of former President George H.W. Bush. As a heroic Navy pilot in the Second World War, a skilled statesman who deftly managed the collapse of the Soviet Union and liberated Kuwait from Saddam Husayn’s aggression, and a committed citizen who remained engaged in public service throughout his later years, President Bush exemplified the virtues of patriotism, duty, and compassion. Officers here at the George Bush Center for Intelligence and deployed around the globe honor the memory of a great American. On behalf of the men and women of CIA, I extend our heartfelt condolences to the Bush family.” 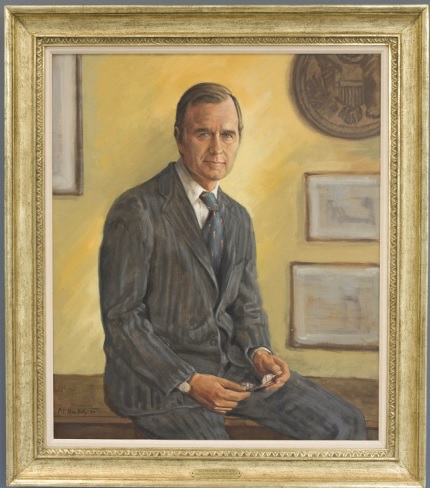 George H.W. Bush’s tenure as Director of Central Intelligence (DCI) marked a turning point for the Agency as it came out of a period of great controversy. He is credited with restoring focus and boosting morale, and he remains one of the most beloved directors in the Agency’s history. George Bush is the only former Director of Central Intelligence to become President. Follow us on TWITTER: @INTEL_TODAY

RELATED POST: On This Day — The Central Intelligence Agency Act Is Signed (June 20 1949)

The turbulent 1970s came to be known as the “time of troubles” for the CIA. Six different DCIs served within a ten-year timeframe, and the Agency was shrouded in controversy from the Vietnam War and covert action programs leaked to the press.

By far the most devastating and consequential leak involved the “Family Jewels,” a list compiled for DCI James Schlesinger detailing controversial and, in some cases, illegal activities undertaken by the Agency. By December of 1974, the list had ended up in the hands of investigative journalist Seymour Hersh.

President Gerald R. Ford sought to quell public and congressional concern by establishing a blue-ribbon commission led by Vice President Nelson Rockefeller to investigate any domestic espionage by the Agency.

Congressional committees led by Representative Otis Pike and Senator Frank Church were formed in early 1975 and aimed to expunge the questionable activities of the CIA in the 1970s. Church referred to the CIA as a “rogue elephant,” claiming it was unsupervised and designed to tell the President what he wanted to hear.

Neither committee discovered evidence capable of destroying the Agency, although the hearings decimated the public image of the CIA and the pride of its employees.

As the committees continued their investigations into late 1975, the Ford Administration had come to feel that then-DCI William Colby had disclosed more information to Congress than was necessary. This belief, coupled with the harsh reality that a dark cloud now hung over the CIA, led the President to conclude the Agency needed a new sense of morale and a new director who could improve strained relations with Congress. On January 30, 1976, Ford replaced Colby with George H.W. Bush. (…)

Three days after Jimmy Carter’s victory over President Ford, Bush called and offered his resignation. Carter became only the second president to pick a new DCI when he first entered the Presidency, setting a trend for presidents to come.

A final briefing between the two occurred on November 19th, when Bush described more than ten sensitive programs being run by the CIA and even mentioned staying on as Director. Carter was notably quiet. He later shut down many of these programs and accepted Bush’s resignation on January 10, 1977, the day of the Presidential Inauguration. (…)

In 2016, in honor of Bush’s tenure as DCI and to mark the 40th anniversary of his swearing-in as Director, the Agency announced the newly-created George H.W. Bush Intelligence Officer award.

The award recognizes CIA officers who engage as exceptional partners across the Agency and within the IC; who strive to deepen tradecraft and expertise; and who deliver on mission, to include how we can improve our performance.

Bush returned home to the Agency for the occasion and to present the awards.

“It is a great joy for me to return to a place that means so much to the defense and security of America,” said Bush in a statement to the Agency.

“To be honest, I am not sure what impact I had on the CIA during my fascinating year helping to lead the Agency, but I can tell you the men and women there made a lasting and profound impact on me… They never get the full recognition they deserve, but it did this 91-year-old heart good today to try to express to them the thanks the men and women of the CIA are surely due.”

On December 15, 1975, a Senate committee opened hearings on whether George H.W. Bush should be confirmed as director of the Central Intelligence Agency. It was not going to be a slam dunk.

Then, on December 23, 1975 — eight days after his confirmation hearing — Richard Welch, the CIA’s station chief in Greece, was returning home from a Christmas party at the U.S. ambassador’s residence in Athens when he was assassinated.

RELATED POST: On This Day — CIA COS Richard Welch Is Assassinated in Athens (December 23 1975)

Instead of admitting gross negligence for the death of Richard Welch, the CIA — under Bush — re-wrote the circumstances of his death in order to  turn the political tide back in favor of the CIA after the damning revelations made by the Church Committee earlier in 1975.

Eventually, Welch’s murder was used politically to help the passage of the Intelligence Identities Protection Act of 1982, making it illegal to reveal the name of an agent who has a covert relationship with an American intelligence organization.

I Want This Job – George H.W. Bush and the CIA

A retrospective on George H. W. Bush’s tenure as Director of Central Intelligence produced by CIA’s Center for the Study of Intelligence.

This video was shown during a January 29, 2016, visit by President and Mrs. Bush to CIA Headquarters to mark the 40th anniversary of Mr. Bush’s swearing in as Director.

This entry was posted in CIA Director. Bookmark the permalink.