“He [Johnny Micheal Spann] led one of our teams into Afghanistan, then under the sway of a dictatorship aligned with global murder.  There, he tracked the authors and allies of terror.  There, while fighting for the future of the American people, he fought to bring a better future to the Afghan people.  And it was there, one evening, that he said he would gladly risk his life if he could help make the world a safer place for his wife and children. As we know, those were much more than words. Our battle with terrorism will be long and difficult.  But those who have taken Mike from us cannot prevail.  And they will not.  Not while a single decent person—who not only loves liberty, but is ready to protect it—stands against them.” 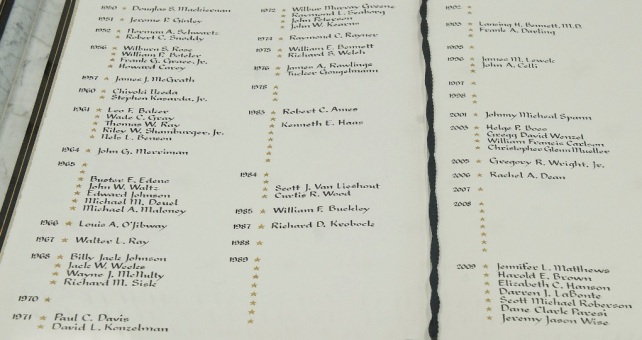 Currently, there are 133 stars carved into the marble of the CIA Memorial Wall: 91 are unclassified. Who are those men and (11) women? When did they die? Why are they honoured by a star? Follow us on Twitter: @INTEL_TODAY

UPDATE (November 29 2019) — Jake Spann and his sisters were the first American kids to lose a parent in Afghanistan.

Jake just turned 18, but he has never stopped wondering about his father. The Washington Post has published a really nice piece on his story.

However, a detail caught my attention and I suspect the Post has the wrong explanation… Allow me to explain.

“All the headstones sat unadorned, except his father’s, No. 2359. A dozen gray and beige pebbles sat on top. A blue-and-white 9/11 Memorial & Museum 5K run/walk medallion hung off the side. Four U.S. flags were stuck in the grass next to a wilted bouquet of flowers. What was a king-of-spades playing card doing there?”

“Jake took a photo of the card and the stones and texted it to his grandfather, but he didn’t know who had placed the items there. Then he texted the CIA officer he had dined with the previous night. The officer said he thought the king of spades was placed there because of his long sword.”

That may be true, but I suspect there is more to it. For instance, in cartomancy, King of Spades people are sometimes described as individuals capable of shouldering tremendous responsibility. “But all too often the load is a crown too heavy to bear. They have the option, through self-discipline, inner strength and effort, to achieve great success far and away from a mundane and simple life, if they so choose.”

Wisdom of Crowds — Do you know why someone placed a King of Spades on Spann’s grave? Do you have an opinion? Let us know!

On June 8 2001, the CIA formally commemorated the 78th star on its Memorial Wall, honoring former Agency officer Tucker Gougelmann, who died in Vietnam in the summer of 1976 after 11 months of torture.

Since the attacks of September 11 2001, 51 stars have been added to the Book of Honor and the Memorial Wall.

Spann joined CIA in 1999 as a paramilitary officer. He deployed to Afghanistan in the fall of 2001.

Spann was the first American killed in combat during the U.S. invasion of Afghanistan in 2001. He died at the Qala-i-Jangi fortress in a Taliban prisoner uprising.

Spann’s star was the 79th carved on the Agency’s Memorial Wall and his name appears in the CIA Book of Honor. (Annual ceremony May 31 2002)

Before I close, I’d like to share the story of one of those heroes—someone with a special connection to Auburn.

Nearly 20 years ago, we had an officer who was on assignment in Afghanistan. He had deployed there in the fall of 2001 as part of our government’s immediate response to the terrorist attacks of September 11th. His name was Johnny Micheal Spann, and he was an Auburn Tiger, Class of 1992.

Mike was born and raised in Winfield, Alabama. A natural athlete, he played wide receiver and running back for the Winfield High Pirates.

As a child, he dreamed of becoming a soldier—his bedroom walls were covered with Marine recruitment posters. He joined the Marines as a student at Auburn, where he graduated with a degree in Criminal Justice, and during his military service rose to the rank of Captain.

Mike came to us as a paramilitary officer after eight years of military service.

In his application to CIA he used the words “action, responsibility, and leadership” to describe himself. And he embodied these traits when he deployed to the arid plateaus of Afghanistan in the fall of 2001.

On November 25th of that year, Mike was in an ancient Afghan fortress where Taliban prisoners were being held and questioned. These captives had supposedly capitulated to US troops, but their pledge of surrender was a ruse.

Mike was interviewing a group of them when hundreds of prisoners suddenly revolted. Immediately before he was attacked and killed in the uprising, Mike was able to warn an Agency colleague of the imminent danger, allowing that officer to get to safety.

“He led one of our teams into Afghanistan. There, he tracked the authors and allies of terror. There, while fighting for the future of the American people, he fought to bring a better future to the Afghan people. And it was there, one evening, that he said he would gladly risk his life if he could help make the world a safer place for his wife and children.”

Mike was the first American to die in the line of duty in Afghanistan.

He demonstrated the highest standards of duty and sacrifice at the forefront of our fight against terrorism. In his short time in Afghanistan, Mike’s actions played a pivotal role in our battle against the Taliban and al-Qa‘ida in the region.

His story is a poignant reminder of the unwavering commitment of all our men and women serving on the front lines.

Note: “Micheal” is the correct spelling of Mr. Spann’s name.

Statistics by cause since 9/11

These statistics only include the list of stars I have discussed so far.