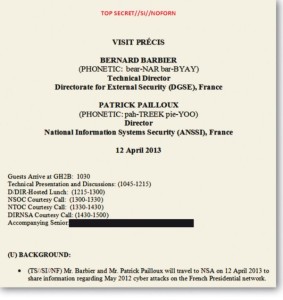 October 31 2020 — The NSA hacked the Élysée Palace in 2012, between the two rounds of the Presidential election. Follow us on Twitter: @INTEL_TODAY

The story of this NSA hack on the French President is a fact and there is no denying it.

Yet, this story was never reported in the US ‘mainstream’ media… Imagine for a moment what those media would publish if we were to learn that some country — pick your favorite villain — had hacked the White House during the 2016 campaign? What goes around, comes around…

The secret document  “SECRET//SI//NOFORN VISIT PRECIS BERNARD BARBIER”  confirms that Bernard Barbier — the Director of the DGSE Technical Division from 2006 to 2013 — visited the NSA on April 12 2013 to discuss the attacks.

Dated 12 July 2012, the document stated it was believed “the attacks originated from France’s allies” and speculated Turkish hackers with possible links to Turkish ‘intelligence services or government bodies’ might be responsible. 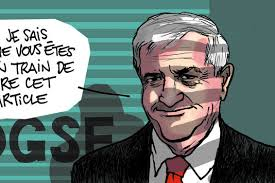 According to Barbier, the difference in term of capacities between the French and the U.S. agencies is significant.

If France gets involved in countries such Mali, Syria and Libya, then you must assume that “these guys” will not sit idle. “They will attempt to make trouble in France.”

In his opinion, France does not have the Intelligence capacity to manage these threats.

Barbier ridicules the idea of a “European CIA/NSA.”

However, he believes that a joint French-German Intelligence Agency could be established and would be very efficient. Such Agency would enjoy a workforce of 15 000 skilled people.

The interview of Bernard Barbier — in French — can be watched in this video.

Unfortunately, the sound quality is quite bad. [Since the original post, the sound has been cleaned up a bit.]