COVID-19 — Why has Belgium the highest death rate in the world? [UPDATE II] 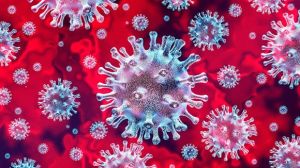 June 2 2020 — Based on a comparison of corona-virus deaths in 178 countries relative to their population, Belgium had the most losses to COVID-19 up until May 29, 2020. These statistics are horrifying. And yet, the truth is even worse. In the Region of Brussels-Capital, the relative death rate is actually twice higher than the average for Belgium. What can possibly explain such an incredibly high death rate? Short answer: incompetence and corruption.  Follow us on Twitter: @INTEL_TODAY

RELATED POST: COVID-19 — The Boy Who Cried Wolf [Is Pompeo telling the truth about the Wuhan Lab?]

UPDATE (October 29 2020) — Belgian epidemiology experts and politicians are shocked. There is a second wave of COVID-19. And Brussels is the epicenter!

These experts did not expect a second wave, or at least not so soon and certainly not so massive. Seriously?

As I told you months ago, there was no doubts whatsoever that this second wave would come in the Fall. And History teaches us that the second wave always hits harder….

But somehow, Belgian experts thought that the problem would go away. No wonder these politicians decided that History should no longer been taught to Belgian kids!

At least, we made some progress. Belgium is clearly the European center of the pandemic and no one is denying the truth anymore.

The data are unambiguous. The previous Belgian ‘Prime Minister’ (Sophie Wilmès) had commissioned a study to deny this fact. She is now under intensive care.

Ask yourself why it is happening? As I told you months ago, nothing was done since the end of the first wave. Nothing works. There is no large-scale testing, no serious tracking and no analysis of waste-waters.

Worse, a few weeks ago, Brussels Health Minister Alain Maron suggested that testing should be limited and/or restricted because of the cost to the environment!?!

Once upon a time, traitors were executed. Today, many citizens would like a criminal investigation of the nursing homes scandal. I doubt very much it will happen.

Anyway, politicians are now in full panic mode in Brussels. Why? The readers of this blog already know the answer.

As I have repeatedly explained in my series “Brussels, Den of Spies”, the European Capital is unique because it hosts so many international institutions.

Many serious people are now wondering if the time has come to move these institutions to a more responsible country. That would be tragic for Belgium. If it happens, Brussels will become a ghost city.

So, what is next? Belgium is slowly, bit by bit and confusingly, re-imposing a lock-down that will last through the winter. The military are ready to step in and offer whatever help they can.

Of course, the Belgium Government is praying and hoping that a vaccine will be available in the Spring 2021.

Well, I have news for these experts. A vaccine will have ZERO effect on the society as a whole. Just consider the fraction of the population that will get a shot and multiply this by the expected efficiency of the vaccine. It is fairly obvious that the virus will keep circulating almost freely.

By the way, as I explained in this post, “In Belgium — a small size country with less inhabitants than New York or Bogota — efforts to address the coronavirus outbreak are managed by the nine federal and regional health ministers.” Obviously, the new government has noticed the issue. They decided to add one more minister — a Special Commissioner — to oversee the COVID crisis. This is going to work so well…

UPDATE (June 19 2020) — How well have OECD countries responded to the coronavirus crisis?

The Intelligence Unit of The Economist has just published an index that ranks the quality of the policy response to Covid-19.

And yes, it confirms my analysis. Belgium had a disastrous — in fact chaotic —  response to this pandemic. There is simply no denying it. 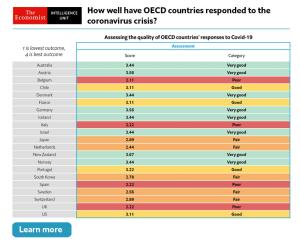 “Well … numbers don’t tell everything, but they do tell something. We cannot deny everything as a whole if we want to learn from our mistakes.”

Prime Minister Sophie Wilmès still lives in denial. She blames the analysis for ignoring the methodology used to count the people who died from the virus and the high population density of Belgium. Others have even argued that Brussels should be compared to New York!

Let me repeat. The over-mortality in Belgium makes it clear that the numbers are accurate.

Asked about the leadership of the Belgian government during the crisis, this expert (Erika Vlieghe) had this to say.

Do these words ring a bell?

In October 2018, I warned that things could go really wrong if the country is hit by a disaster when nobody is at the helm.

And this is exactly what happened! And make no mistake. A second wave will come in the Fall.

First, just the facts. Here are the data collated by the Johns Hopkins University.

This is quite bad. But, in fact, the situation is actually even worse than what it seems.

The Brussels-Capital region is home to about 1.2 million inhabitants [1] and accounts for about 1500 of the total number of deaths caused by the COVID-19.

This implies that the death rate in Brussels is actually 1250, that is 50% higher than the national average which is already the highest in the world and more than 10 times the average of neighboring Germany.

The first time I watched a press conference about the pandemic, I was horrified to hear one of the Belgian experts declare that Belgium had already passed the inflection point but not yet reached the peak!

I knew right then that we were in deep troubles. I have no doubts whatsoever that this ‘expert’ does not know what an inflection point is.

I am certain that he would be unable to calculate (either analytically or numerically) the derivative of a function.

When a few days later, a journalist asked why Belgium has a far higher death rate than Germany, this ‘expert’ explained that Belgium has an older population than Germany. That is FALSE. [2]

The German population is much older, and therefore — everything being equal — Germany should have a higher relative death rate than Belgium.

Soon, a new explanation was  offered. The Belgian ‘experts’ use a different methodology to count the deaths!

From March 16 to May 10 2020, the over-mortality in Belgium was about 50%. And that is about 10,000 more deaths than what would be expected from the average of the same period in the last 5 years, which is exactly the number of deaths attributed to COVID-19.

The Truth: Corruption and Incompetence

In October 2018, I wrote — while discussing corruption — that Belgian politicians may be unable to form a federal government after the 2019 general elections.

And I warned that this could be bad news if the country is hit by a disaster when nobody is at the helm. And this is exactly what happened!

“While Belgium had been struggling to form a new federal government since the elections of 26 May 2019, the coronavirus pandemic sparked new debate on the ongoing formation, as the actual minority caretaker government Wilmès I wouldn’t have all the ability to tackle the coronavirus crisis and its consequences.”  [Wikipedia — COVID-19 pandemic in Belgium]

To make it worse, in Belgium — a small size country with less inhabitants than New York or Bogota — efforts to address the coronavirus outbreak are managed by the nine federal and regional health ministers! [3]

When I learned that the new health minister for Brussels was Alain Maron (French speaking Green Party — ECOLO), I warned you that a disaster was coming.

How did I know? Because this incompetent idiot belongs to the gang that turned ‘Bruxelles Environnement’ [the ‘Brussels-Capital Environment Protection Agency’] into a criminal organization. [4]

The only thing these people can do is to dance in the streets with teenagers and sing: “Save the polar bears!”

Alain Maron should understand that his job is not to save the polar bears of the arctic circle.

His job is to save the life of human beings in Brussels! So far, he has done NOTHING!

And these teenagers should not be in the streets on schooldays. They should be in the classroom learning how to take the derivative of a function. That can be useful at times…

PS — The 2020 University Ranking has just been released. People have the governments they deserve. Sadly, people also have the universities they deserve.

The two universities located in the Brussels-Capital region [VUB and ULB] rank 195 and 251 among the 2020 list of the best colleges in the world.

Let me be clear. If the Belgian soccer team was not ranked in the top 50, there would be blood in the street.

Belgian people would riot. There would be a revolution. But who cares about universities? Belgium has become a full-fledged IDIOCRACY!

1) In 2019, the population of Belgium numbered around 11.4 million. Most of these inhabitants (6.9 million) lived in the Dutch-speaking Flemish Region, which was home to nearly half of Belgium’s population. The Walloon Region, broadly in line with the French-speaking part of Belgium, numbered roughly 3.6 million inhabitants, and another 1.2 million lived in the Brussels-Capital region.

4) The ‘Bruxelles Environnement’ agency has developed a fraudulent software — used to deliver GSM antennas permits — to allow the telecoms operators to use far more power than is allowed by the law.

The people they put in charge of the control of the microwave emissions have repeatedly falsified their measurements and reports to hide clear violations of the law.

They have also helped a foreign power to conduct acts of espionage in Brussels. Nice people!

COVID-19 — Why has Belgium the highest death rate in the world?

COVID-19 — Why has Belgium the highest death rate in the world? [UPDATE]

COVID-19 — Why has Belgium the highest death rate in the world? [UPDATE II]

This entry was posted in COVID-19 and tagged COVID-19. Bookmark the permalink.