“For a small cadre of CIA veterans, the death of Osama bin Laden was more than just a national moment of relief and closure. It was also a measure of payback, a settling of a score for a pair of deaths, the details of which have remained a secret for 13 years. Tom Shah and Molly Huckaby Hardy were among the 44 U.S. Embassy employees killed when a truck bomb exploded outside the embassy compound in Kenya in 1998.”

“Molly exemplified the valor and compassion that are hallmarks of our finest officers.” 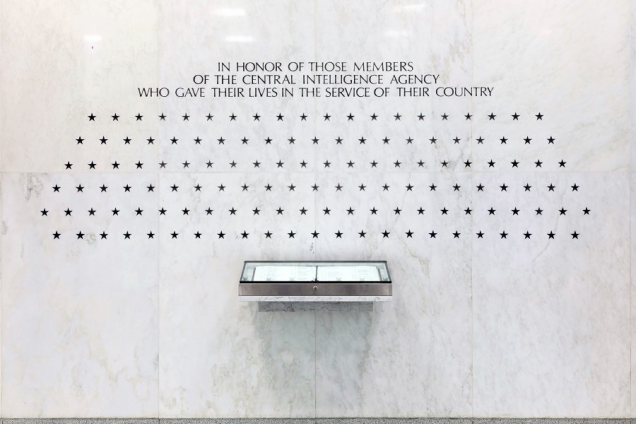 The Memorial Wall is a memorial at the Central Intelligence Agency headquarters in Langley, Virginia. It honors CIA employees who died in the line of service. There are 133 stars carved into the white Alabama marble wall. Eleven represent women.

August 7 2020 — The Memorial Wall is a memorial at the Central Intelligence Agency headquarters in Langley, Virginia. The wall honors CIA employees who died in the line of service. Today, there are 133 stars carved into the white Alabama marble wall. Eleven are known represent women. Follow us on Twitter: @Intel_Today

A special page  “CIA Book of Honor” has been created.

This page will allow you to find the references to the stars we have already written about. I will try to keep this page up to date.

Molly C.H. Hardy died in the August 1998 suicide bombing of the U.S. Embassy in Nairobi, Kenya. She was 51.

“Veteran officer Molly N. Hardy, moments before she was killed in the August 1998 suicide bombing of the US Embassy in Nairobi, used her keen situational awareness to warn colleagues to take cover.” [CIA Website]

[NOTE. Her full name is Molly Carol Huckaby Hardy. So, the CIA — see website — seems to be a mistaken regarding her middle name. ]

Hardy was a divorced mother from Valdosta, Georgia, who raised a daughter as she traveled to Asia, South America and Africa over a lengthy career.

At the CIA station in Kenya, she handled the office finances, including the CIA’s stash of money used to pay sources and carry out spying operations.

She was a new grandmother and was eager to get back home when Al Qaeda struck.

PS: Did you know Molly C. H. Hardy? Would you like to share a story? Just let us know.

The 1998 US Embassy Bomb in Nairobi, Kenya

Women of the CIA — Newsweek

The Mystery of Jane Wallis Burrell: The First CIA Officer To Die in the Agency’s Service — CIA news & Information

Tribute to Women Who Have Died — STUDIES IN INTELLIGENCE

Who was Elizabeth Hanson? — COLBY Magazine