“The CIA was also looking at infecting the vehicle control systems used by modern cars and trucks. The purpose of such control is not specified, but it would permit the CIA to engage in nearly undetectable assassinations.” 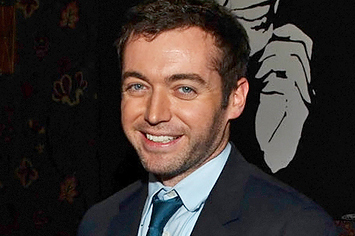 June 18 2019 — WikiLeaks’ revelations that the CIA was attempting to remotely hack vehicles have reignited a conspiracy theory: Did the Agency assassinate journalist Michael Hastings? Follow us on Twitter: @Intel_Today

RELATED POST: Wormwood — Why Did The CIA Murder US Army Scientist Frank Olson?

RELATED POST: One Year Ago — The Man Who Dodged “638 CIA Plots” to Assassinate Him

UPDATE (June 18 2020) — The Central Intelligence Agency’s elite hacking team “prioritized building cyber weapons at the expense of securing their own systems,” according to an internal agency report prepared for then-CIA director Mike Pompeo and his then-deputy Gina Haspel. [Business Insider]

The theft of highly classified cyberweapons from the CIA in 2016 resulted from the agency’s elite hacking unit’s failure to secure its own systems from intruders, according to an internal report obtained by The Washington Post.

The CIA discovered the breach when the radical pro-transparency group WikiLeaks published the information in a release dubbed “Vault 7.” US officials say the breach was the largest unauthorized disclosure of classified information in CIA history.

Security protocol within the hacking unit that developed the cyberweapons, housed within the CIA’s Center for Cyber Intelligence, was “woefully lax,” the report found.

Moreover, the CIA may never have discovered the breach in the first place if WikiLeaks hadn’t published the documents or if a hostile foreign power had gotten a hold of the information first, according to the report.

And if that was not enough, my friends from “Electrospaces” have noticed that the CIA also failed to properly redact the CIA report about the loss of the Vault-7 hacking tools.

Hastings rose to prominence with his coverage of the Iraq War for Newsweek in the 2000’s.

The article documented the widespread contempt for civilian government officials by the general and his staff and ultimately resulted in McChrystal’s resignation.” [Wikipedia]

At the time of his death, Hastings was working on a profile of CIA Director John Brennan.

“Michael Hastings contacted WikiLeaks lawyer Jennifer Robinson just a few hours before he died, saying that the FBI was investigating him.” 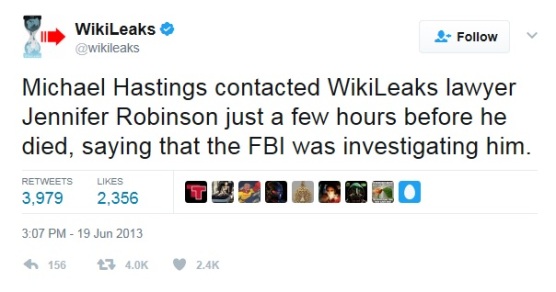 Last 24 Hours — A few hours prior to his death, Hastings sent an email to a few colleagues and friends, warning that he was onto a “big story”. He also told them that he was under investigation.

“The Feds are interviewing my ‘close friends and associates’.

May be wise to immediately request legal counsel before any conversations or interviews about our news-gathering practices.

I’m onto a big story and need to go off the radar for a bit.

All the best, and hope to see you soon. Michael.”

Conspiracy Theories? — Former U.S. National Coordinator for Security, Infrastructure Protection, and Counter-terrorism Richard A. Clarke said that what is known about the crash is “consistent with a car cyber attack“.

“There is reason to believe that intelligence agencies for major powers — including the United States — know how to remotely seize control of a car.”

“You can do some really highly destructive things now, through hacking a car, and it’s not that hard. So if there were a cyber attack on the car — and I’m not saying there was — I think whoever did it would probably get away with it.”

“At no time was journalist Michael Hastings under investigation by the FBI.”

The FBI file on Michael Hastings were released to the public on September 24 2013 after investigative journalist Jason Leopold and MIT doctoral candidate Ryan Shapiro filed a joint suit in July 2013 against the FBI for ignoring their FOIA requests for the file.

War Machine is a 2017 American satirical war film directed and written by David Michod based on the nonfiction book “The Operators” by Michael Hastings.

It is a fictionalized version of the events in the book based on the firing of United States Army General Stanley McChrystal.

“War Machine” is directed by David Michod and stars Brad Pitt as a thinly veiled-veiled version of Stanley McChrystal, the gung-ho general who led U.S. forces in Afghanistan until he was fired when a Rolling Stone journalist wrote a revealing article about him and his slightly out-of-control staff.

The movie, released by Netflix, is based on the article and book by the late Michael Hastings. What Hastings and the film got precisely right is the impossible strategy behind America’s never-ending ground wars.

There is no hero in this movie, and if there’s an anti-hero, it’s the war itself, which is profane, vicious, complex, and a bit naïve. [Intercept]

CIA Hacking Revelations and the Murder of Michael Hastings

“On this edition of The Geopolitical Report, we delve into the WikiLeak’s “Vault 7” series of CIA leaks. The latest trove details the agency’s hacking operations compromising iPhone and Android phones, the Windows operating system, and Smart TVs.

The disclosure also reveals the CIA’s ability to remotely control car computers, an ability that lends further credence to the assertion the journalist Michael Hastings was assassinated for outing Gen. Stanley McCrystal and for his planned expose on CIA boss John Brennan. We also go into the CIA’s long history of assassination.”

Michael Hastings was that rarest of breeds: a mainstream reporter who wasn’t afraid to rail against the system, kick back against the establishment, and bite the hand that feeds him.

On the morning of June 18, 2013, he died in a fiery car crash. But now, details are emerging that he was on the verge of breaking an important new story about the CIA, and believed he was being investigated by the FBI.

Now even a former counter-terrorism czar is admitting Hastings’ car may have been cyber-hijacked.

Join us this week on The Corbett Report as we explore the strange details surrounding the untimely death of Michael Hastings.