“As I told the Prime Minister the last time, he vastly overestimates the competence of the CIA.”

“Evidence now suggests that Zhou knew of the plot beforehand and secretly changed his travel plans, though he did not stop a decoy delegation of lesser cadres from taking his place.” 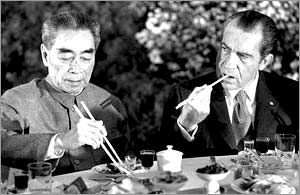 April 11 2020 — On April 11 1955, the Kashmir Princess — a chartered Lockheed L-749A Constellation aircraft owned by Air India — was damaged in mid-air by a bomb explosion. The plane crashed into the South China Sea while en route from Hong Kong to Jakarta, Indonesia. Sixteen of those on board were killed, while three survived. The target of the assassination was non other than the Chinese Premier, Zhou Enlai. Follow us on Twitter: @Intel_Today

RELATED POST: Blast From The Past: Nixon & the CIA’s Daily Briefs

Zhou Enlai was expected to be on board. He had planned to fly from Beijing to Hong Kong and then to Jakarta on the ‘Kashmir Princess’ but an emergency appendectomy delayed his arrival in Hong Kong by several days.

From the outset, China accused the United States of involvement in the bombing.

The day after the crash, China’s Foreign Ministry issued a statement that described the bombing as “a murder by the special service organizations of the United States and Chiang Kai-shek”

On the same day, Hong Kong Governor Sir Alexander Grantham stated that the plane had not been not tampered with in Hong Kong.

However, on May 26 1955, an Indonesian board of inquiry announced that a time bomb — with an American-made MK-7 detonator — was responsible for the crash.

The investigators concluded that it was highly probable that the bomb had been placed on the plane in Hong Kong.

The Mystery of Chow Tse-Ming

“As investigators and police chased leads about Chow Tse-Ming, they began to unravel a mystery.

Apparently, Chow Tse-Ming was an alias; in fact, two other aliases for the same man were also uncovered.

As well, in the days leading up to the bombing and crash of the plane, they learned that Chow Tse-Ming had been spending a lot of money around Hong Kong, as if living it up based on income or savings that an airport janitor shouldn’t reasonably have.

Perhaps he had been paid to plant the bomb?  Finally, his disappearance from Hong Kong was traced to him having departed quietly on a Civil Air Transport (CAT) flight to Taiwan.

As the Chinese knew all too well, CAT was a frequent CIA contract air carrier, though it also flew other airline operations and cargo flights around the region.

Fingers began pointing at the Central Intelligence Agency as the possible culprit, though a competing theory soon emerged when others considered that the CAT flight had delivered Chow Tse-Ming to Taiwan.

Indonesian investigators reported that amidst the wreckage, they had identified an American-made MK-7 detonator device, adding fuel to the fire.

The British-run Hong Kong police surmised that it seemed likely that the man was an agent of the Kuomintang’s intelligence operations arm, a theory which the Chinese also felt had validity. Undoubtedly, the CIA had supplied MK-7 triggers to Taiwan.”  [Flights Stories]

CIA plans existed… But they were disapproved

While the CIA had considered a plan to assassinate Zhou Enlai at this time, the Church Committee reported that these plans were disapproved of and “strongly censured” by Washington.

In a 1971 face-to-face meeting in the Great Hall of the People in Beijing, Zhou Enlai directly asked Henry Kissinger about the alleged US involvement in the bombing. Kissinger responded:

“As I told the Prime Minister the last time, he vastly overestimates the competence of the CIA.”

The successful investigation of the ‘Kashmir Princess’ crime and the  identification of its culprits was possible because of the recovery of some part of the detonator device.

That story was not lost on the CIA and other American spooks.

In the late 80s, the US Intelligence Community ‘mirculously’ identified twice Libya as the culprit of airliner bombings thanks to the investigation of a tiny part of the detonators: a Swiss timer — known as the MST-13 — in the case of Pan Am 103 (December 21, 1988) and a Taiwanese timer in the UTA 772 bombing (September 19, 1989).

In both cases, these timers were ‘unambiguously’ linked to Libya’s Gaddafi.

In both case, the identification was made by the same FBI investigator — Tom Thurman — who was later discredited for altering official reports.

And by the way, this FBI agent had not scientific qualifications whatsoever.

“It is striking to note the similarity of the ‘scientific’ evidence discovered by the FBI’s Tom Thurman in both the Lockerbie and UTA cases.

Of the tens of thousands of pieces of debris collected at each disaster site, one lone piece of printed circuit was found and, miracle of miracles, in each case the fragment bore markings that allowed for positive identification: MEBO in the Lockerbie case and TY in the case of UTA Flight 772.

Despite the common findings of the DCPJ, the DST and the Prefecture of Police crime laboratory, Juge Bruguière chose to believe Thurman, the expert in fabricating evidence.”

One of Thurman’s student and ‘protégé’ — Former FBI Rick Hahn —  investigated the crash of Avianca 203 (November 27, 1989) and concluded that the Colombian plane had been destroyed by a bomb on the order of Pablo Escobar.

A recent investigation concluded that the crash was due to mechanical failure. Again, that agent had not scientific qualifications.

After several years of inquiry, the US DOJ ordered these two agents, as well as any other individual without proper scientific qualifications, out of the FBI explosion Unit. Never too late…