“I have issued an executive order that provides additional authority for responding to certain cyber activity that seeks to interfere with or undermine our election processes and institutions, or those of our allies or partners.

Using this new authority, I have sanctioned nine entities and individuals: the GRU and the FSB, two Russian intelligence services; four individual officers of the GRU; and three companies that provided material support to the GRU’s cyber operations.

In addition, the secretary of the treasury is designating two Russian individuals for using cyber-enabled means to cause misappropriation of funds and personal identifying information.”

“It has been extraordinarily painful to endure these many months of false accusations of ‘treason’. But I recognize that the actions I acknowledged in court today were wrong, and, through my faith in God, I am working to set things right. My guilty plea and agreement to cooperate with the special counsel’s office reflect a decision I made in the best interests of my family and of our country.” 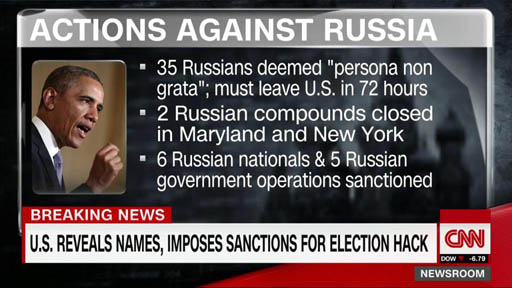 On December 29 2016, US President Barack Obama retaliated against Russia for hacking American computer systems and trying to influence the 2016 presidential election by ejecting 35 Russian spies and imposing harsh sanctions. Surprisingly, Russia did not respond in kind. Follow us on Twitter: @INTEL_TODAY

RELATED NEWS: CIA Accusations are Unproven, Dangerous and Beyond Hypocrisy

On December 1 2017, Mike Flynn admitted to one count of knowingly making false, fictitious and fraudulent statements when interviewed by two FBI agents in January 2017.

According to the charges, Michael Flynn is accused of:

Falsely telling FBI agents that on or about 29 December 2016 he did not ask Russia’s then ambassador to the US, Sergei Kislyak, to “refrain from escalating the situation in response to sanctions that the United States had imposed against Russia that same day”

Failing to recall that Mr Kislyak had later told him Russia was moderating its response to the sanctions as a result of his request.

Two other false statements [UN vote on Resolution 2334 and undeclared business with Turkey] are not relevant to this story.

The reasons for the lies are much debated on MSM. For now, I would rather work out the best possible timeline of what exactly happened between December 28 and December 31 2016. Once this is done, everything else will follow.

During this time period, Mr. Flynn was in the Dominican Republic. Other senior members of Mr. Trump’s transition team, including Ms. McFarland, were with the president-elect  at Mr. Trump’s Mar-a-Lago resort in Palm Beach, Fla. Mr. Kushner was vacationing in Hawaii with his family.

The executive order announced sanctions against Russia in response to that government’s actions intended to interfere with the 2016 presidential election.

The Obama Administration formally alerts the Russians (before Kislyak’s text to Flynn) as well as the Trump Transition Team.

K. T. McFarland, writes in an email to Thomas P. Bossert that sanctions announced hours before are aimed at discrediting Mr. Trump’s victory and make it much harder for Mr. Trump to ease tensions with Russia.

“Key will be Russia’s response over the next few days,” Ms. McFarland writes in an email to Bossert.

Bossert forwards  McFarland’s message to six other Trump advisers, including Flynn; Reince Priebus, who had been named as chief of staff; Stephen K. Bannon, the senior strategist; and Sean Spicer, who would become the press secretary.

In the morning, Spicer tells reporters that the president-elect would be meeting with his national security team, including McFarland, that day. A phone call that included  Trump, Flynn, McFarland, Priebus and Bannon is scheduled for 5 p.m., shortly after McFarland’s email exchange.

Flynn, who is on vacation in the Dominican Republic, claims that he did not see the (Dec. 28)  message from Kislyak until December 29.

Upon seeing the text, Flynn responds that he would call in 15-20 minutes.

Mr Flynn contacts KT McFarland at Mar-a-Lago in Florida to discuss a response.

On that call, Flynn and KT McFarland  discussed the U.S. Sanctions, including the potential impact of those sanctions on the incoming administration’s foreign policy goals.

KT McFarland  and Flynn also discussed that the members of the Presidential Transition Team at Mar-a-Lago did not want Russia to escalate the situation.

Flynn calls the Russian ambassador back, urging Russia not to escalate the situation.

December 30 2016 — Russian President Vladimir Putin released a statement indicating that Russia would not take retaliatory measures in response to the U.S. Sanctions at that time.

Mr. Trump praised that decision in a tweet, writing: “Great move on delay (by V. Putin) — I always knew he was very smart.”

December 31 2016 — Kislyak calls Flynn to and informed him that Russia had chosen not to retaliate in response to Flynn’s request.

Flynn’s Statement of the Offense

Tit-for-Tat: What Mike Flynn’s 302 Reveals about the Lies He Told  — Emptywheel

This entry was posted in Russia and tagged Russia. Bookmark the permalink.