“From the first, it was clear that all the main stakeholders — Defense Minister Sergei Shoigu, Chief of the General Staff Valeri Gerasimov, and the GRU hierarchy itself — favored the promotion of one of Sergun’s depties: Vyacheslav Kondrashev, Sergei Sizunov, Igor Lelin, and Igor Korobov. Of them all, Korobov, head of the Strategic Intelligence Directorate (USR: Upravlenie strategicheskoi razvedky) was clearly the front-runner.“

“The loving memory of this wonderful person, a true son of Russia, a patriot of the Fatherland Colonel-General Igor Valentinovich Korobov will always be in our hearts.” 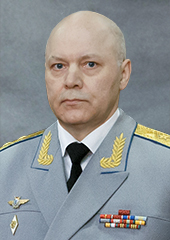 January 9 2017 — Lieutenant-General Igor Valentinovich Korobov is the current Chief of the Main Intelligence Directorate (GRU) of the Russian Federation. UPDATE — Korobov died on Wednesday after “a serious and long illness”, the Russian defense ministry said on Thursday, hailing him as a “true son of Russia.” Follow us on Twitter: Intel_Today

Korobov was one of the individuals sanctioned by the United States Department of the Treasury for “malicious cyber-enabled activities” threatening the national security of the United States.

On December 29 2016, General Korobov — as well as three of his deputies — has been added to OFAC’s SDN List.

The US administration considered him to be responsible for tampering, altering, or causing the misappropriation of information with the purpose or effect of interfering with or undermining election processes or institutions.

Nevertheless, although it was not reported by the NYT and other US media, Korobov  visited the US in February 2018.

Korobov was absent from a ceremony in Moscow this month where Putin and other senior officials celebrated the centenary of the GRU, with the Russian leader praising its skill and “unique abilities.”

Korobov was born on 3 August 1956. In 1977, he graduated with honors from the Stavropol Higher Military Aviation School for Pilots and Navigators, North Caucasus Military District, as an officer in the Soviet Air Forces.

Korobov served as the head of the Strategic Intelligence Directorate (Upravlenie strategicheskoi razvedky).

So Korobov managed all GRU human intelligence (HUMINT) collection resources, except its most critical and productive “illegals” and their agents which the Chief of the GRU personally controls, according to Viktor Suvorov (Vladimir Rezun). [Russian Defense Policy]

On 2 February 2016, Korobov was promoted to the head of the GRU following the death of General Igor Sergun . He also acted as caretaker leader after Sergun’s death.

Korobov’s appointment continues a tradition from the end of the 1990s:  the first deputy chief for strategic [agent] intelligence becomes the new head of the GRU.  His immediate predecessors — the late Igor Sergun and Aleksandr Shlyakhturov — were both “strat guys.” [Russian Defense Policy]

The exact circumstances of General Sergun’s death are currently unknown. The Ministry of Defence gave no information on how or where he died, saying he passed away on 3 January aged 58. (Some media have suggested that Sergun died on January 1st in Lebanon following a secret trip to Damascus. The Kremlin would not comment on these allegations.)

Not an obvious choice

Meanwhile, Korobov, about whom all the Russian media can find to say is that he is a “serious man,” starts work with a formidable agenda before him. As head of the USR, he had already been playing a key role in the Syrian operation, so there is unlikely to be any real change there.

However, one of Sergun’s great strengths had been his capacity to play well with Putin and the powerful Presidential Administration. His successor starts with the handicap of knowing that they didn’t want him and would have preferred to be talking to [Deputy Defense Minister Lt. Gen. Alexei ] Dyumin.

US Issuance of Amended Executive Order 13694

On 29 December 2016, Igor Korobov — as well as three of his deputies — has been added to OFAC’s SDN List. The US administration considers him to be responsible for tampering, altering, or causing the misappropriation of information with the purpose or effect of interfering with or undermining election processes or institutions.

Despite the international fallout and political repercussions surrounding the announcement, it is not clear how much effect the sanctions will have, except on the ousted diplomats, who have until midday Sunday to leave the country. G.R.U. officials rarely travel to the United States, or keep assets here.

What Putin’s Security Appointments Say About How Russia Works

Who Is Who in World Intelligence and Security Agencies : GRU Igor Korobov [UPDATE]