“There had never been a known leak from the Western Union telegraph office on Court Street before that day, but this news was simply too good to keep quiet. As you might guess, they were overjoyed, so that word very quickly leaked into the community and the party was on.” 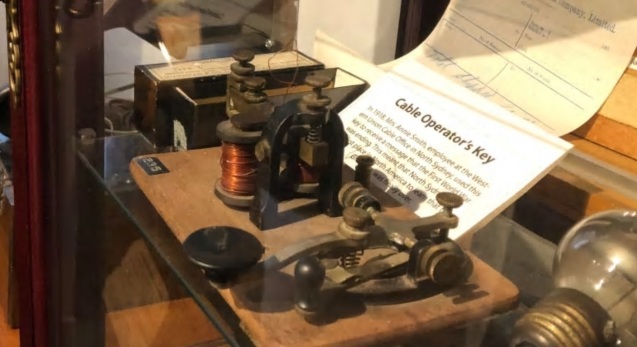 The North Sydney Historical Museum houses the telegraph machine that received the oversea message announcing an armistice would be signed on Nov. 11, 1918.

On November 10 1918, Western Union Cable Office in North Sydney, Nova Scotia received a Morse coded message from Europe stating that all fighting — on land, sea and in the air — would cease the next day. Follow us on Twitter: @INTEL_TODAY

After four harrowing years, the message trickled in via Morse code on the morning of Nov. 10, 1918 at a telegraph office in North Sydney, N.S.

And before anyone else in North America knew, people in the small Cape Breton town had already begun to celebrate the joyous news direct from the War Office in London: an armistice would be signed the next day.

More than 300 U.S. personnel who were in North Sydney joined off-duty military personnel in a spontaneous parade around the town as part of a celebration that lasted all day.

In the evening, bonfires were lit and the festivities continued. Bars that would normally be closed on Sunday were opened, but they had to close early when they ran out of liquor.

“So effectively, by the time the rest of North America found out about the war being over, North Sydney was nursing a giant hangover.”

This Saturday, 100 years after that Morse code message, North Sydney will mark the end of the First World War and the town’s unique place in history.

There will be a re-enactment of the receipt of the message starting at 9:30 a.m., followed by a parade, music and readings. The day will be capped with a bonfire at the Ballast Grounds at 6 p.m.

This entry was posted in WWI and tagged Armistice, WWI. Bookmark the permalink.