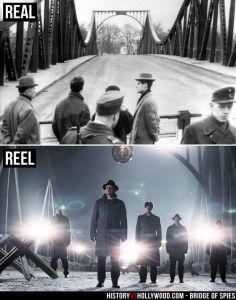 February 10 2021 — At 8:52 am on February 10 1962, American U-2 pilot Francis Gary Powers was exchanged in a spy swap for Rudolf Ivanovich Abel, a senior KGB spy at the now famous Glienicke Bridge. Follow us on Twitter: @Intel_Today

RELATED POST: Former Double Agent : “Self-destruction of humankind has been put back on the agenda”

Rudolf Ivanovich Abel was an English-born KGB man who had been caught spying in New York in 1957.

In an unusual move, the CIA published its own report into Powers’s conduct, saying he acted honourably throughout – and entirely in accordance with the instructions given to him.

In 1970, he wrote a book titled “Operation Overflight”, which led to his termination from Lockheed at the request of the CIA.

“He then became an airborne traffic reporter for radio station KGIL in the San Fernando Valley, and was known for his unique sign off “Gary Powers, KGIL skywatch” when he finished his report.

He was then hired by Los Angeles television station KNBC to pilot their “telecopter,” a helicopter equipped with externally mounted 360 degree cameras.

Powers died, aged 47, on August 1, 1977 when, upon his return from covering brush fires in Santa Barbara county, his helicopter ran out of fuel and crashed just a few miles from Burbank Airport where he was based.

KNBC cameraman George Spears was also killed in the incident.

Many have wondered or speculated on how an experienced pilot such as Powers could have allowed the aircraft to run out of fuel.” [The 1962 Spy Exchange of Powers for Abel]

A dramatic thriller set against the backdrop of a series of historic events, BRIDGE OF SPIES tells the story of James Donovan (Hanks), a Brooklyn lawyer who finds himself thrust into the centre of the Cold War when the CIA sends him on the near-impossible task to negotiate the release of a captured American U-2 pilot.

Screenwriters Matt Charman and Ethan Coen & Joel Coen have woven this remarkable experience in Donovan’s life into a story inspired by true events that captures the essence of a man who risked everything and vividly brings his personal journey to life.

Gary Powers: The U-2 spy pilot the US did not love — BBC News