“I need not go into the rest of the story and the explosion, except to say that some of us believe that, within hours, the Americans had guessed, at a very high level, what had gone wrong. It is a matter of fact that the American helicopters were on site within an hour and 25 minutes. It began back in December 1988, New Year’s Eve to be precise, when a police officer, a constituent and friend, came to me and said that he was very worried about so many Americans, on the awful site of Lockerbie, searching and rummaging through the wreckage, and possibly destroying important evidence.”

“All three forensic scientists who worked intensively on this case, one for the FBI (Tom Thurman) and two for a branch of the UK ministry of defense (Allen Feraday and Thomas Hayes) had run into trouble in the past for concealment of evidence (Hayes), wrong conclusions (in one case, false testimony on an explosive timer—Feraday), and fabrication of evidence (Tom Thurman).”

“The forensic link to Libya was allegedly established by a tiny piece of circuit board from a timer, mysteriously found in remote countryside after the bombing, and traced by the FBI to a Swiss manufacturer who sold timers to Libya. The genius behind this detective work was FBI agent Tom Thurman.

For reasons that were never clear Mr Thurman was not called to give evidence to the hugely expensive trial of two Libyans three years ago. The US authorities and their media, however, were full of praise for Thurman and his work. In November 1991, for instance, he was named ‘Person of the Week’ on the TV Network ABC.

The rivers of praise dried up rather suddenly when The Person of the Week’s work at the FBI Explosives Unit was investigated by the Department of Justice. Their inquiry found that Thurman had been routinely altering the reports of scientists working in the unit. Fifty-two such reports were investigated. Only 20 had not been altered.”

“Williams and Thurman merit special censure for their work. It recommends that Thurman, who has a degree in political science, be reassigned outside the [Explosives Unit] lab and that only scientists work in its explosives section.”

December 28 2020 — On December 28 1988, seven days after the Lockerbie tragedy, AAIB inspector Michael Charles announced that two pieces of metal recovered in the wreckage of PA 103 provided convincing evidence of a detonating high performance plastic explosive.   Follow us on Twitter: @INTEL_TODAY

UPDATE (December 28 2020) — On December 21 2020, the 32nd anniversary of the Lockerbie tragedy, the US DoJ announced new charges against a third former Libyan intelligence operative for his role in the destruction of Pan Am Flight 103.

During the Press conference, Acting U.S. Attorney Michael R. Sherwin for the District of Columbia reviewed the forensic evidence.

Sherwin explained that explosive residues were found on the primary suitcase indicating that SEMTEX had been used. This statement is totally incorrect.

No traces of RDX and PETN — the 2 components of SEMTEX — were found on any fragment of that SAMSONITE.

Actually, the FBI affidavit does NOT make this claim. Still, why is Sherwin lying during the press conference? And why is it that no one has pointed his error?

According to a CIA analysis dated December 22 1988, a male caller claimed that a group called the Guardians of the Islamic Revolution had destroyed the plane in retaliation for the U.S. shoot-down of an Iranian passenger airliner the previous July.

“We consider the claims from the Guardians of the Islamic Revolution as the most credible one received so far,” the analysis concluded.

Yet, in a matter of days, US intelligence came to the conclusion that the group was not involved in the tragedy.

During the afternoon of December 22 1988, a crew from Border Television filmed the arrival of a large number of plain-clothed Americans agents bringing a single coffin to the crime scene.

The American became very nervous and asked the crew to stop filming at once. But the police had granted him authorization and he continued. The pictures were broadcasted that evening.

On December 25 1988, FBI agent Thomas Thurman discovered evidence that PA 103 had been destroyed by a high performance plastic explosive.

The following is a short extract from Thurman’s precognition.

“On 25 December 1988, we established where the piece of metal had been located. It was apparently at a farm. I went with some Scots to the farm. There was a gaggle of us. I remember it was raining and it was foggy. We saw a piece of metal sticking in the ground. It seemed to be a skid rail for a baggage container.

The Scottish Police took custody of it. They seemed to be flabbergasted that we found it. I heard a yell. I was over a ridge at the time. I saw it simply sticking into the ground. I cannot actually recall if it did have pitting, but it was very close to the heart of the explosion and was blackened. The rest of the day was spent searching the field nearby and on the evening of the 25th December 1988 there was a de-briefing.

I reported to FBI Headquarters that it looked like we were dealing with a bomb. It would take time, I explained, to collect the pieces. At that stage, everyone was quite understandably concentrating on the location of bodies. I went back to the US on the basis that I could return once all the debris had been pulled out. I went back to Lockerbie in January 1989 but I cannot remember the precise date.

I brought a number of FBI colleagues with me, all from the Explosives Unit. I was in charge. There was Rick Hahn, Paul Schrecker, David Williams and Greg Carl. We were not in the evidence chain of custody. We were more advisors.”

Here are a few pictures from the Lockerbie investigation “Joint Report”. 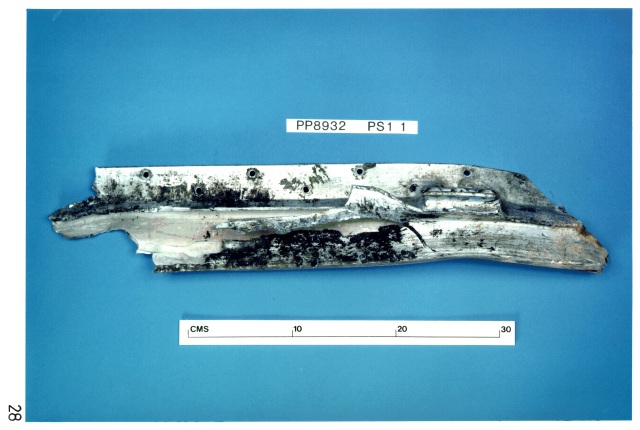 The Lockerbie trial statistics are impressive. The trial amassed 10,232 pages of evidence amounting to more than 3m words.

The court was shown 2,488 pieces of evidence and heard 229 prosecution witnesses. The trial cost £ 60m.

One would therefore safely conclude that the evidence of SEMTEX in the bombing of Pan Am 103 is well established.

One would be wrong! No fragments of the suitcase revealed traces of explosive residues.

And none of the important fragments — radio, timer and pieces of clothing surrounding the device — were actually tested for explosive residues.

Only one piece of debris (a beam from the luggage container) — out of 4 million pieces collected — indicated the presence of SEMTEX.

When I first saw these data, I immediately understood that something was badly wrong.

The spectrum indicated that all kinds of explosive residues were present in the swabs.

This is clearly nonsense as some of these explosives, such as TNT and SEMTEX components, do not mix. Obviously, this was a case of contamination.

Years later, we learned that the UK laboratory — DSTL at Porton Down — that had conducted these measurements was indeed totally contaminated.

One could find explosive residues in the offices, in the library, in the restaurant, anywhere.

Over the years, that laboratory has been renamed many times: RARDE, DERA, DSTL, but it is still the same damn institution.

Thomas Thurman, the head of the FBI Explosives Unit, was investigated by the Department of Justice Office of the Inspector General (OIG).

The inquiry found that Thurman had been routinely altering the reports of scientists working in the unit.

The SCCRC also discovered that Thurman had lied under oath to a Grand Jury.

“This position is clearly inaccurate, as was discovered during the precognition process. In fact Sherrow (BATF agent) gave the timer K1 to the CIA in late 1987 and it was in CIA possession until June 1990.

John Orkin* [Real name: Jack Christie] of the CIA was the person who identified the similarity between PT/35(b) and K1, not Thurman.”

Thurman had claimed that he had made the identification of PT/35(b) and that he had received the MEBO timer from a BATF agent. He lied on both counts. When confronted with these lies, he told the following.

“I was told that, as far as the CIA (the Agency) was concerned, it was not to be involved in the chain of custody and that the device was to be regarded as having come directly from the Bureau of Alcohol, Tobacco and Firearms.

I took the device and said that I would obtain instructions from headquarters as to how to deal with the situation. I showed the timing device and photograph to the laboratory director and he agreed with the identification. This was the first occasion on which I fronted a find for the Agency.

The decision to present the situation in this manner was made within the administrative confines of the Federal Bureau of Investigation. I do not know who made the decision. For public consumption, the Bureau of Alcohol, Tobacco and Firearms had provided the timer.”

PS: Thurman and Hahn are also ‘famous’ for solving the cases of UTA 772 and Avianca 203. Both stories have been recently widely discredited by experts.

Warning: this film reports on the aftermath of the Lockerbie bombing and contains footage from the scene of the impact which viewers may find upsetting

The story of the Lockerbie bombing told through five powerful voices three decades later. STV’s John MacKay talks to Canon Patrick Keegans, then the local parish priest who knew each of the 11 victims on the ground; Colin Dorrance, the police officer who found himself at the heart of an unfolding tragedy just weeks into the job and David Stewart, who recovered the bodies of victims from his family’s farm. Broadcaster Kaye Adams, then a young journalist for STV, recalls the horrors she witnessed reporting live from the town and Victoria Cummock, then a 35-year-old mother of three from Florida, tells the heart-breaking story of how her husband John died on Pan Am 103 after changing his flight to return home to his family earlier than planned.

Thirty years later, their memories of December 21, 1988 have not diminished.

This entry was posted in Lockerbie and tagged FBI, Lockerbie, Pan Am 103, Thomas Thurman. Bookmark the permalink.