Three Years Ago — Former Double Agent George Blake : “Self-destruction of humankind has been put back on the agenda” 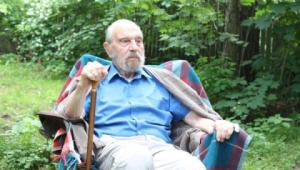 November 18 2017 — On the eve of his 95th birthday, former KGB double agent George Blake said that officers of the SVR — the Russian foreign intelligence service — have “the difficult and critical mission” of saving the world. Follow us on Twitter: @INTEL_TODAY

RELATED POST: The search for the “Fifth Man” — Spooks and Chess Players

On November 10 2017, SVR chief Sergei Naryshkin congratulated former KGB double agent George Blake on his birthday, describing him as “a reliable comrade, a man of great wisdom … and a skillful teacher” who had been a role model for the agency’s officers.

George Blake hailed Russia’s modern spies as the heroes of “a true battle between good and evil”. “They must save mankind from nuclear destruction”, he added.

George Blake (born George Behar 11 November 1922) is a British former spy who worked as a double agent for the Soviet Union.

He became a Communist and decided to work for the KGB while a prisoner during the Korean War.

Discovered in 1961 and sentenced to 42 years in prison, he escaped from Wormwood Scrubs prison in 1966 and fled to the USSR.

He was not one of the Cambridge spies, although he associated with fellow traitors Donald Maclean and Kim Philby after reaching the USSR. [Wikipedia]

In Friday’s statement Blake said that after seeing civilians killed by “the American military machine” he decided to become a double agent.

“I realised back then that such conflicts are deadly dangerous for the entire humankind and made the most important decision in my life to cooperate with the Soviet intelligence voluntarily and for free to help protect peace in the world.”

UPDATE (November 18 2018) — On November 18 2017, General John Hyten — the top US nuclear commander — said that he would resist President Donald Trump if he ordered an “illegal” launch of nuclear weapons.

“I provide advice to the president, he will tell me what to do.

And we’ll come up with options, of a mix of capabilities to respond to whatever the situation is, and that’s the way it works. It’s not that complicated.

If you execute an unlawful order, you will go to jail. You could go to jail for the rest of your life.”

Some senators want legislation to alter the nuclear authority of the US president.

In November 2017, a Senate committee held the first congressional hearing in more than four decades on the president’s authority to launch a nuclear strike.

UPDATE (November 18 2019) — In a recent interview with the BBC’s Steve Rosenberg, former President Gorbachev called for all countries to declare that nuclear weapons should be destroyed.

The former Soviet leader warns that current tension between Russia and the West is putting the world in “colossal danger” due to the threat from nuclear weapons.

Former Double Agent : “Self-destruction of humankind has been put back on the agenda”

One Year Ago — Former Double Agent : “Self-destruction of humankind has been put back on the agenda”

Two Years Ago — Former Double Agent : “Self-destruction of humankind has been put back on the agenda”

Three Years Ago — Former Double Agent George Blake : “Self-destruction of humankind has been put back on the agenda”