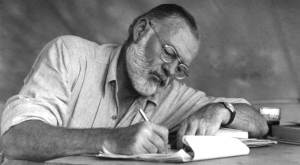 American writer Ernest Hemingway (1899 – 1961) working at a portable table while on a big game hunt in Kenya, September 1952. (Photo by Earl Theisen/Getty Images)

October 28 2020 — On October 28 1954, the Nobel Prize in Literature was awarded to Ernest Miller Hemingway “for his mastery of the art of narrative, most recently demonstrated in The Old Man and the Sea, and for the influence that he has exerted on contemporary style.”

Hemingway was aware of his long surveillance by J Edgar Hoover’s FBI, who were suspicious of his links with Cuba, and it has been argued that this surveillance may have pushed him to the brink. Follow us on Twitter: @INTEL_TODAY

“Happiness in intelligent people is the rarest thing I know.”

“The world breaks everyone, and afterward, some are strong at the broken places.”

“The FBI’s surveillance substantially contributed to his anguish and his suicide.”

A. E. Hotchner — Hemingway’s friend and collaborator over the last 13 years of his life

“Ernest Hemingway’s relationship with the Federal Bureau of Investigation would charitably be described as ‘strained’. Hemingway would tell anybody who’d listen that he thought the Bureau were a bunch of Nazi mediocrities … and the FBI in turn dismissed Hemingway as a drunken phony. As his file shows, however, all of that changed when Hemingway finally did something the Bureau agreed with: he died.”

Perhaps, you will be surprised to learn that Hemingway was hounded by the FBI.

Hemingway had repeatedly called Hoover the head of “the American Gestapo.”

A. E. Hotchner was a good friend of Hemingway. Hotchner came to the conclusion that the FBI may have been responsible for his suicide.

“This man, who had stood his ground against charging water buffaloes, who had flown missions over Germany, who had refused to accept the prevailing style of writing but, enduring rejection and poverty, had insisted on writing in his own unique way, this man, my deepest friend, was afraid — afraid that the F.B.I. was after him, that his body was disintegrating, that his friends had turned on him, that living was no longer an option.

Decades later, in response to a Freedom of Information petition, the F.B.I. released its Hemingway file.

It revealed that beginning in the 1940s J. Edgar Hoover had placed Ernest under surveillance because he was suspicious of Ernest’s activities in Cuba. Over the following years, agents filed reports on him and tapped his phones.

The surveillance continued all through his confinement at St. Mary’s Hospital. It is likely that the phone outside his room was tapped after all.

In the years since, I have tried to reconcile Ernest’s fear of the F.B.I., which I regretfully misjudged, with the reality of the F.B.I. file. I now believe he truly sensed the surveillance, and that it substantially contributed to his anguish and his suicide.”

Hemingway Is the Winner Of Nobel Literature Prize — NYT