“I really do want Kryptos to remain secret – the plain text, the final section of Kryptos, I would prefer for it to remain secret indefinitely. (…) I would think that every artist would aspire to making an artwork that is not transient. It’s a permanent visual, auditory, conceptual statement. And I did Kryptos with all those things in mind. And one – as an artist, one would prefer to have that piece continue giving rather than have it understood right off the bat and then more or less ignored. And so this has lived way beyond all of my expectations, you know, at 30 years in retaining a secret that it has, and that’s the magic.” 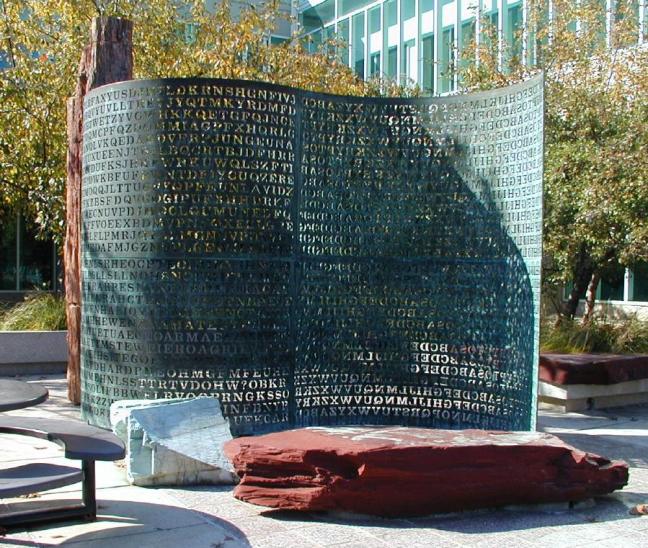 February 6 2020 — NPR’s Mary Louise Kelly spoke with Jim Sanborn, creator of a cryptographic puzzle sculpture called “Kryptos” located at CIA headquarters, about his decision to release a third and final clue. Follow us on Twitter: @INTEL_TODAY

RELATED POST: KRYPTOS Week 2019 — How to Break a Vigenère Code

RELATED POST: KRYPTOS Week 2019 — SECTION I : A KEYED Vigenère Cipher [And why the CIA lies so much about it?]

UPDATE (September 28 2020)  — Contrary to the promise he made in January of this year, Jim Sanborn actually released a fourth clue to a few people in mysterious circumstances in April 2020. This  information became widely known in late August 2020.

The 4th Clue — The four letters in positions 22-25, cipher-text FLRV, are EAST in the plain-text.

According to the 3rd clue, the letters in positions 26-34, cipher-text QQPRNGKSS translate into the word NORTHEAST.

A member of a Kryptos online discussion group which is managed by Elonka Dunin had a recent post from a participant. he said he had contacted Sanborn about a possible solution, and the response included an image showing the layout of K4 letters — and the new four letters.

Members of the group were incredulous, but the participant insisted that he had received the clue directly from Sanborn. I wrote to the sculptor to ask if this was true, and if so, inadvertent. “I don’t do much that’s inadvertent,” he replied.

“I released this layout to several people as early as April [2020] to spice things up during this unpresidented [sic: unprecedented] time and to see how long it would take to flow through the community, and frankly I was a tad bored,” he said.

The person who brought the new clue to the group, Sukhwant Singh, was adamant in the face of frank disbelief that Sanborn simply put another clue out there. He used the payment system Sanborn set up to winnow the number of inquiries he gets, and EAST was part of Sanborn’s reply.

Comment — The fact that Sanborn released the cipher-text and plain-text of a word  used twice in the message should be very useful.

Yet, the KRYPTOS group associated with Elonka Dunin had this information since April and they have not been able to crack the code.

This is worrisome. It think it is becoming clear what method has been used to encrypt K4. And this is not good news. Or is it? Stay tuned!

Kryptos is a sculpture by the American artist Jim Sanborn located on the grounds of the Central Intelligence Agency (CIA) in Langley, Virginia.

Of the four parts of the message, the first three — known as K1, K2 and K3 — have been solved. However K4, the last part of the message, remains one of the most famous unsolved code in the world.

As predicted by Intel Today, a third clue to KRYPTOS 4th passage has been released: the word NORTHEAST, at positions 26 through 34.

However, I do believe that Sanborn may have given us a bit more than just one clue. Let us pay attention to some of his comments….

Background information — Obviously, geopolitical events that occurred in late January or early February 1990 may have had an influence on Sanborn when he drafted the KRYPTOS riddle.

KELLY: Why give us a new clue now?

SANBORN: Well, it is very close – within days – to when I actually developed that 97-character string. The dedication ceremony is actually not until November, but obviously prior to the dedication, I had to come up with the final clue section. And that’s why I’m doing it now, basically.

A tip about the method used to cipher KRYPTOS ? — In previous posts, I told you how NSA people broke Section III and I explained why I had great doubts that Sanborn — an artist — has used complex mathematical transformations to code that section. If I am right about this — and Sanborn himself appears to confirm my analysis — the consequences could be far reaching. More about this in my next post…

KELLY: We should note there’s an irony here. You are not a professional code writer or code breaker. You’re not a mathematician. When I’ve interviewed you before, you told me you’re pretty lousy at math.

SANBORN: I am lousy at math to the point where I consider myself to be an analpha-math. Now, perhaps being an artist, I have an advantage in that I can employ methods that don’t have anything to do with mathematics.

A riddle wrapped in a mystery inside an enigma — This is not new. Sanborn has warned us long ago that even deciphered, KRYPTOS will still be a tough riddle to solve.

KELLY: When and if it is finally cracked, what is the puzzle? What is the mystery that will be revealed?

SANBORN: It’s a 97-character phrase. And that phrase is in itself a riddle. It’s mysterious. It’s going to lead to something else. It’s not going to be finished when it’s decoded.

Maybe, Sanborn has spent too much time with CIA people… Although I have no reason to suspect the last statement to be false, I believe that it may be seriously misleading those trying to crack the last part of KRYPTOS.

A New (And Final) Clue To ‘Kryptos,’ A Long-Standing Puzzle — All Things Considered (NPR)

The KRYPTOS Sculpture — Jim Sanborn : ” This is the third and to be sure final clue.”

This entry was posted in KRYPTOS and tagged Jim Sanborn, KRYPTOS. Bookmark the permalink.