“The bombing of the Pan Am flight [103] was conceived, authorised and financed by Ali-Akbar Mohtashemi-Pur, Iran’s former interior minister. The execution of the operation was contracted to Ahmad [Jibril], Popular Front for the Liberation of Palestine General Command [PFLP-GC] leader, for a sum of $1million. $100,000 of this money was given to Jibril up front in Damascus by the Iranian ambassador to Sy [Syria], Muhammed Hussan [Akhari] for initial expenses. The remainder of the money was to be paid after successful completion of the mission.”

“I asked de Villiers about his next novel, and his eyes lighted up. ‘It goes back to an old story,’he said. Lockerbie. The book is based on the premise that it was Iran — not Libya — that carried out the notorious 1988 airliner bombing. The Iranians went to great lengths to persuade Muammar el-Qaddafi to take the fall for the attack, which was carried out in revenge for the downing of an Iranian passenger plane by American missiles six months earlier, de Villiers said. This has long been an unverified conspiracy theory, but when I returned to the United States, I learned that de Villiers was onto something. I spoke to a former C.I.A. operative who told me that ‘the best intelligence’ on the Lockerbie bombing points to an Iranian role. It is a subject of intense controversy at the C.I.A. and the F.B.I., he said, in part because the evidence against Iran is classified and cannot be used in court, but many at the agency believe Iran directed the bombing.”

The Spy Novelist Who Knows Too Much — Robert F. Worthjan

September 24 2019 — There has been a persistent “rumor” that Iran paid a large amount of money — possibly up to US$ 10 million — to the PFLP-GC terrorist organization of Ahmed Jibril in the immediate aftermath of the Lockerbie tragedy. This is simply a piece of disinformation. Although the CIA and the DIA have often claimed to have evidence of such ‘payment’, a quick look at the source document will easily convince you that this legend was built around a suspicious transaction that has nothing to do with the Lockerbie tragedy. The SCCRC came to the same conclusion. Although Richard Marquise (FBI) is not willing to discuss the issue (the information is still classified), I believe that he agrees with my findings. Follow us on Twitter: @INTEL_TODAY

RELATED POST: The Dark Past of Special Prosecutor Robert Mueller — The Bulger Gang, Lockerbie, Anthrax… An Exceptional Failure All Round.

RELATED POST: One Year Ago — Lockerbie : An open letter from Dr Jim Swire

UPDATE (September 24 2020) — Some pseudo-experts continue to report as a fact the story of a Iranian payment to Ahmed Jibril. That story is a fabrication. FULL STOP

Over the last two decades, I have investigated the Lockerbie Case. Among other things, I managed to tracked the so-called “Iran payment”, and I can state with 100% confidence that this transaction has nothing to do whatsoever with Lockerbie.

This piece of disinformation received considerable attention when Dr Davina Miller published a story titled:  “Who Knows About This? Western Policy Towards Iran: The Lockerbie Case.”

According to Pr. Black, this ‘seminal paper’ was

“perhaps the most important, detailed and unbiased account yet written about the political background to the Lockerbie atrocity. For anyone with a genuine interest in the case, it is required reading.”

Let me be clear. Dr Miler writes MEK propaganda disguised as academic research. This blog is about Intelligence and Truth, not about Politics and Propaganda.

Just once, I will however explain to my readers what is going on with Politics and Propaganda behind the scene.

For this purpose, I will pick a story recently penned by Dr Miller and published both by The Hill and the official website of the MEK organisation.

In a November 2016 piece, Dr Miller argues that “It’s time for a new policy on Iran.”

Specifically, she suggested that the nuclear deal with Iran — the Joint Comprehensive Plan of Action (JCPOA) — should be trashed. She also argued that the MEK is a serious alternative to the current regime in Tehran.

Le me be clear, this is utter nonsense. Every expert has argued that the JCPOA was the best possible deal.

The list of these experts includes former CIA directors, the Western Intelligence agencies involved [France, Britain, and the European Union ] as well as former Mossad directors.

Even former U.S. Secretary of State Henry Kissinger stated in November 2016 that there was nothing to gain by ending the agreement.

“A reversion to the relationship that prevailed prior to last year’s signing of the Joint Comprehensive Plan of Action (JCPA) between Iran and the so-called P5+1 consisting of the United States, Russia, China, France, Britain, and the European Union would be undesirable, to say the least, but that appears to be what is likely to develop.”

Sadly, in May 2018, President Trump — ill advised by some people in his inner circle (Bolton, Pompeo, and other clowns) — has indeed withdrawn the US from the 2015 Joint Comprehensive Plan of Action with Iran.

This decision has totally isolated the US. Last month (August 2020), 13 of the 15 security council members have sent formal letters opposing Trump administration attempts to extend the economic embargo on Iran. Only the Dominican Republic sided with the US…

Historically, the Mujahedin-e-Khalq (MeK) has been one of the worst enemies of the United States. However, the US delisted it as a terrorist group in 2012.

John Bolton is their most powerful advocate. At a 2017 MeK rally in Paris, Bolton declared:

“There is a viable opposition to the rule of the ayatollahs, and that opposition is centred in this room today. The behaviour and objectives of the regime are not going to change, and therefore the only solution is to change the regime itself.”

By the way, Bolton was paid $40,000 for that speech. As for the unbiased stories published by the Hill, it is well document that the paper has regularly inserted paid propaganda disguised as journalistic pieces.

Everyone is entitled to his own opinion, but not to his own facts. The story of the Tehran payment to Jibril has been investigated by several organizations. It is false and known to be false.

Intel Today believes that those who spread this kind of lies are despicable individuals, specially if they claim to seek the truth.

For many years, I have believed that Pr Black and the “Justice for Megrahi” group sincerely wanted only Truth and Justice. I was wrong.

For what is worth, I will make a prediction. Once again, I will repeat the obvious. Blaming Tehran for Lockerbie will not help the cause of Megrahi. Such lie will only help to confirm the guilty verdict against him. What a tragedy!

PS — It is known that Gerard De Villiers has worked for the DGSE and was indeed no more than a mouthpiece for the French Intelligence agencies.

The following quote from “The Trail of the Octopus” is a good example of the allegation made against Iran.

“[The] minister of the interior, Ali Akbar Mohtashemi, was placed in charge of planning Iran’s revenge [for the downing of Iran Flight 655 by the USS Vincennes on July 3 1988].

At a meeting in Tehran on 9 July 1988, he awarded the contract to Ahmed Jibril, a former Syrian army officer and head of the Popular Front for the Liberation of Palestine-General Command (PFLP-GC), based in Damascus.

Although Jibril later denied his complicity in the bombing, he was reported to have bragged privately that the fee for the job was $10 million.

Unnamed US government sources let it be known that the CIA had traced wire transfers of the money to Jibril’s secret bank accounts in Switzerland and Spain.”

I have discussed this issue before. Indeed, many ‘Lockerbie experts’ in MSM, Academics, Intelligence and Political circles  have accepted as fact the story of a Iranian payment to Jibril as an act of revenge for the downing of IRAN Flight 655.

French writer Gerard De Villiers has even written a novel about it. In that story, “Son Altesse Sérénissime” (SAS) Malko Linge is tasked by the CIA to recover the proof of the US$ 10 million bank transfer.

The CIA does not intend to formally use this evidence to accuse Tehran but plan to blackmail the ‘ayatollahs’ in giving up their nuclear program.

Uncharacteristically, Malko’s mission end in  failure and there seems no hope to ever recover these documents. [The novel was criticized by Frank Duggan and the Cohen family.]

This alleged “payment” is indeed a subject of intense controversy at the C.I.A. and the F.B.I. as I found out.

Former CIA Bob Baer told the SCCRC all he knew about this (and other) payment. On several occasions, Baer told me that the intelligence regarding this matter was “Class A”.

On the other hand, Richard Marquise – the FBI agent who led the US side of the Lockerbie investigation – told me that he had seen the evidence and that the money transfer had nothing to do with Lockerbie.

Unlike SAS Malko Linge, I have found the paperwork of this infamous money transfer.

Don’t you want to know? Read on!

Considering the importance of Baer’s allegations, he was interviewed by the SCCRC. Here is the main conclusion of their report on this matter:

15.7 According to the submissions Mr Baer provided the following information at these meetings: The Popular Front for the Liberation of Palestine-General Command (“PFLPGC”) and Talb both received substantial payments after the bombing of PA103. In particular Mr Baer had details of bank accounts showing payments of $11m to the PFLP-GC in Lausanne on 23 December 1988 and $500,000 to Talb on 25 April 1989 in Frankfurt. According to the submissions Mr Baer believed the payments came from Iran.

15.30 As with his claim about the meeting in July 1988, the Commission considers Mr Baer’s allegation about the payment to be inadmissible hearsay. More importantly the results of the Commission’s enquiries refute the allegation that a payment of $11m was made to a PFLP-GC account on 23 December 1988.

Well, here is the PRIMARY evidence of the “US$10 million transaction”. Check the currency! It amounts to a bit more than 10 million Spanish Pesetas! [SCCRC investigators believe that this account may have been used for money laundering operations.] 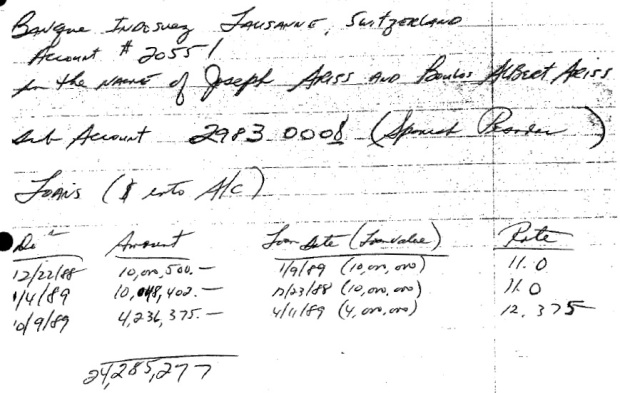 The so-called US$ 10 million payment evidence. A transfer of 10 million did indeed occur on December 22 1988; not in dollars but in Spanish pesetas.

Long ago, I asked Richard Marquise to comment on the following information:

“Two day after the bombing, communication intercepts indicate that Tehran ordered their Ambassador in Beirut to pay Jibril Organization for the successful operation.

The transfer of the money is recorded and Dalkamoni was in possession of the Paris bank account number when he was arrested.”

Marquise — who led the Lockerbie investigation at the FBI — kindly replied to my question:

I believe that Marquise is right about this. This transaction – and all other transactions to and from his account (and its many joint accounts) –  has absolutely nothing to do whatsoever with Pan Am 103.

Also, the SCCRC found no evidence that Dalkamoni was in possession of the Paris bank account number when he was arrested.

15.36 According to DS Russell’s report, account 20551 was known to have been used on occasions for laundering large sums of money. His report also states the following:

Again, the SCCRC found no link between these money transfers and Abu Talb.

A RIDDLE, WRAPPED IN A MYSTERY, INSIDE AN ENIGMA — PT35B

SAS : ‘Son Altesse Sérénissime (His Serene Highness) is a series of espionage novels created by French author Gérard de Villiers, featuring prince Malko Linge as the lead character. In order to finance the repairs of his castle in Liezen, Austria, main character Malko Linge works as a freelance agent for the CIA. The CIA sends him on dangerous missions all over the world.’ [Wikipedia]

This entry was posted in Lockerbie and tagged Lockerbie, Pan Am 103. Bookmark the permalink.