Lockerbie – The TRUTH, And Now What? [Leo Tolstoy on Time and Truth]

“History is a set of lies that people have agreed upon.” 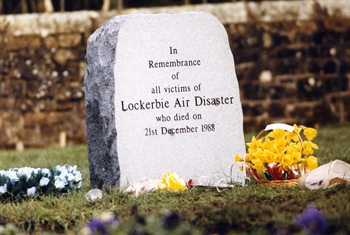 August 3 2020 — Over the last two decades, I have written over a hundred pieces about the tragedy of Pan Am Flight 103. This year I have decided to summarize my research in a short book: Lockerbie — Three Decades of Lies: J’Accuse…!

Robert Black QC FRSE — Professor Emeritus of Scots Law in the University of Edinburgh and best known as the “Architect of the Lockerbie Trial” – has written: “The Lockerbie trial is the most disgraceful miscarriage of justice in Scotland for 100 years. Every lawyer who has read the judgment says ‘this is nonsense’. It is nonsense.”

Pr. Black is hardly alone in thinking that the Lockerbie verdict against Megrahi is a ‘Grand Monument to Human Stupidity’. From Chomsky to Mandela, I have collected more than 100 quotes from scholars, former diplomats, Intelligence officers and politicians who think likewise.

This book brings together, with solid evidence, most of the really stupid and unlikely elements of the Libya case: Gauci’s identification of Megrahi, the clothing from Malta, especially the Slalom shirt, and the infamous fragment of a timer: PT/35(b). When collected together, these elements of the case show the conviction of Megrahi is indeed utter nonsense.

My research also breaks the frame of current thinking. Until now, there were two widely accepted theories about Lockerbie: Libya OR Iran/PFLP-GC. This new book explores and demonstrates that another theory is available and provable.

QUICK NOTES — To make it easier for the readers to retrieve various chapters of this book, I have created a special page  “Lockerbie” where all the links to the chapters will be listed with a brief description. You can access that page directly as it appears at the far right of the top bar of this blog.

New Evidence and Logic have led me to rewrite 30 years of History. Pan Am Flight 103 disintegrated in flight over Lockerbie on December 21 1988 because of a massive structural failure due to well-known issues of metal fatigue in section 41 and 42 of the Boeing 747 (Series 100 & 200), not because of an explosive device. [NOTE II]

Will people be willing to accept a radically different version of History after 30 years of deception? Will Historians accept the TRUTH after three decades of Lies? Can Men and women accept the FACTS when reality is so horrible that just thinking about it is highly unpleasant? One does not easily erase 30 years of propaganda.

Leo Tolstoy’s non-fiction book “The Kingdom of God Is Within You” is the culmination of thirty years of thinking. This major philosophical treatise — first published in Germany in 1894 after being banned in Russia — lays out a new organization for society based on an interpretation of Christianity focusing on universal love.

According to Tolstoy, the answers to my questions will depend on whether or not a person has already made up his mind about the TRUTH.

“The most difficult subjects can be explained to the most slow-witted man if he has not formed any idea of them already; but the simplest thing cannot be made clear to the most intelligent man if he is firmly persuaded that he knows already, without a shadow of a doubt, what is laid before him.”

In 1894 Constance Garnett — who translated the work into English — wrote:

“One cannot of course anticipate that English people, slow as they are to be influenced by ideas, and instinctively distrustful of all that is logical, will take a leap in the dark and attempt to put Tolstoy’s theory of life into practice.”

Indeed, there may be a few giants such Bertrand Russell, but most English people appear to distrust Logic. Remember the weather in Malta?

And the vast majority of American people hate Logic, particularly when it leads to a conclusion they cannot and will not accept. Remember super-witness Giaka?

Obviously the CIA will never acknowledge the sordid role they have played in this cover-up. And to be sure, the FBI will not admit its many lies and the utter incompetence of his investigators.

As I wrote in the introduction, there is not a chance of a snowball in Hell that this author will receive the USD 5 million Reward promised by the US Government for the TRUTH about Lockerbie. From the very start, that money was earmarked to buy Lies, certainly not to reveal and reward the TRUTH.

Sadly, I know full well that journalists in the US and the UK will ignore the story for many reasons. According to a well-informed source, there may even be a D-Notice – or at least a Gentlemen Agreement – to ignore all aspects of the upcoming new Lockerbie appeal and,  in general, all stories about Pan Am 103.

And of course, I already know that Wikipedia will not mention one word about my research and findings. If someone ever ventures to write a few words about my work on the PA103 Wikipedia page, it is a safe bet to predict that “Phillip Cross” will delete the entry in the next 3 minutes, if not faster!

Nevertheless, a brave publishing company may decide to give the book a chance. A courageous filmmaker may turn the book into a documentary, or even a mini-series.

If this ever happens, I sincerely believe that ordinary people will accept the conclusions of my research. Some investigators may even be prompted to dig a bit deeper in this case and related matters.

I wish I could dream of a movie, but we know that it did not go very well when Steven Spielberg considered this project a few years ago… This topic is simply taboo in Hollywood.

Final thoughts — Through the Looking-Glass is an 1871 novel by Charles Lutwidge Dodgson — better known by his pen name Lewis Carroll — and the sequel to Alice’s Adventures in Wonderland (1865).

[Dodgson’s mathematical work attracted renewed interest in the late 20th century. In his Symbolic Logic Part II, Dodgson introduced the Method of Trees, the earliest modern use of a truth tree. Martin Gardner’s book on logic machines and diagrams and William Warren Bartley’s posthumous publication of the second part of Dodgson’s symbolic logic book have sparked a reevaluation of Dodgson’s contributions to symbolic logic.]

In the 1871 sequel, Alice again enters a fantastical world, this time by climbing through a mirror into the world that she can see beyond it. There she finds that, just like a reflection, everything is reversed, including logic.

Sometimes I find myself wondering which side of the mirror holds the real world?

By the way… “The Big Short” — a great movie! — opens with a quote from Mark Twain:

“It ain’t what you don’t know that gets you into trouble. It’s what you know for sure that just ain’t so.”

There is just one glitch. Twain never wrote it or said it or anything like it. However, Michael Lewis’s book — The Big Short — opens with the quote from Leo Tolstoy mentioned above in this post.

Considering that the Twain quote is literally about the dangers of thinking you know something that actually isn’t true, this false quote/attribution is truly a piece of delicious irony! You’ve got to love Hollywood…

PS — On December 29 2007, I argued that Crypto AG had rigged the equipment used by diplomats around the world allowing US Intelligence Agencies to decode their messages in real-time.

On February 11 2020, I was finally vindicated when Swiss broadcasting company SRF, German public broadcaster ZDF and the Washington Post confirmed most details of the story after gaining access to several  classified, comprehensive CIA history documents summarizing Operations “Thesaurus” and  “Rubicon”.

Will Main Stream Media ever confirm my story of Lockerbie after gaining access to  classified documents? I would like to think so, but I doubt it will happen during my lifetime.

NOTE I — Napoléon Bonaparte surrendered to the British and was exiled to the island of Saint Helena in 1815 where he died in 1821. Emmanuel, comte de Las Cases met regularly with the ex-emperor, and he took notes of conversations.

The popular work “Mémorial de Sainte Hélène: Journal of the Private Life and Conversations of the Emperor Napoleon at Saint Helena” was released and translated into English in 1823. Napoléon reportedly spoke the adage, but disclaimed credit.  [What Is History But a Fable Agreed Upon? — Quote Investigator]

“The truth of history, so much in request, to which every body eagerly appeals, is too often but a word. At the time of the events, during the heat of conflicting passions, it cannot exist; and if, at a later period, all parties are agreed respecting it, it is because those persons who were interested in the events, those who might be able to contradict what is asserted, are no more. What then is, generally speaking, the truth of history? A fable agreed upon. As it has been very ingeniously remarked, there are, in these matters, two essential points, very distinct from each other: the positive facts, and the moral intentions.”

In his 1943 “Esar’s Comic Dictionary”, Evan Esar  defined History as: “Something that never happened, written by a man who wasn’t there.” So true!

NOTE II — To the best of my knowledge, very few of these planes are still active and all of them are configured as CARGO. Remember that all 747’s built after #686 had stronger sections 41&42.

Here is the list according to information gathered from Planespotters :

Lockerbie – The TRUTH, And Now What? [Leo Tolstoy on Time and Truth]