“When I briefed Tony Blair, it was quite clear that he felt this was a necessity, that there was a just cause, that we had to do something about this. How he portrayed that politically… I do not think he played it very well.” 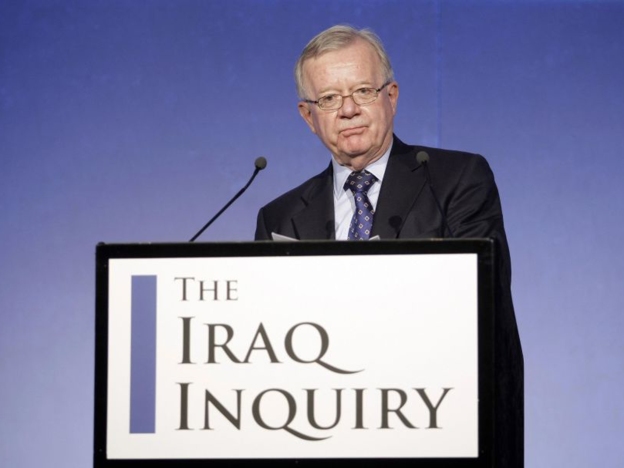 July 7 2017 — Sir John Chilcot has concluded that Tony Blair was not “straight with the nation” about his decisions in the run up to the Iraq War. Follow us on Twitter: @INTEL_TODAY

RELATED POST: One Year Ago — An Inconvenient Death : How The Establishment Covered Up The David Kelly Affair [Book Review]

Speaking for the first time since publishing his report a year ago, Sir John Chilcot — the chairman of the inquiry into the Iraq war — discussed why he thinks the former PM made those decisions.

“I think any prime minister taking a country into war has got to be straight with the nation and carry it, so far as possible, with him or her. I don’t believe that was the case in the Iraq instance.”

Asked if he felt Blair had given the fullest version of events to the inquiry, Chilcot said:

“I think he was under – as you said just now – very great emotional pressure during those sessions … He was suffering. He was deeply engaged. Now in that state of mind and mood you fall back on your instinctive skills and reactions, I think.”

Beliefs rather than facts

Chilcot said the evidence Mr Blair gave the inquiry was “emotionally truthful” but he relied on beliefs rather than facts.

“I think he gave an – what was – I hesitate to say this, rather, but I think it was, from his perspective and standpoint, emotionally truthful and I think that came out also in his press conference after the launch statement.”

“Tony Blair is always and ever an advocate. He makes the most persuasive case he can. Not departing from the truth but persuasion is everything,” Chilcot said.

Sir John Anthony Chilcot is a British retired civil servant. His appointment as chairman of an inquiry into the circumstances surrounding the Iraq War in 2003 was announced in June 2009.

Chilcot was educated at Brighton College and Pembroke College, Cambridge, where he read English and languages. A career civil servant until his retirement in 1997, he served as Permanent Under-Secretary of State at the Northern Ireland Office, Deputy Under-Secretary at the Home Office in charge of the Police Department, and a variety of posts in the Home Office, the Civil Service Department and the Cabinet Office, including Private Secretary appointments to Home Secretaries Roy Jenkins, Merlyn Rees, and William Whitelaw, and to the Head of the Civil Service, William Armstrong.

He was a member of the Butler Review of the use of intelligence in the run-up to the invasion of Iraq in 2003. He acted as “staff counsellor” to MI5 and MI6 from 1999 to 2004, “dealing with private and personal complaints from members of the intelligence services about their work and conditions”. [Wikipedia]

About the Chilcot Inquiry

On 15 June 2009, the then British prime minister Gordon Brown announced that Chilcot would chair an inquiry into the Iraq War, despite his participation in the discredited secret Butler report. Opposition parties, campaigners and back bench members of the governing Labour Party condemned the decision to hold the inquiry in secret and its highly restrictive terms of reference which would not, for example, permit any blame to be apportioned.

In 2015, Chilcot was criticised as the Iraq Inquiry remained unpublished after six years. The head of Her Majesty’s Civil Service Sir Jeremy Heywood said the inquiry had repeatedly turned down offers of extra assistance to help speed up the report. On 29 October 2015, it was announced that the inquiry would be published in June or July 2016.

The report was published on 6 July 2016, more than seven years after the inquiry was announced. [Wikipedia]

The report stated that:

Saddam Hussein did not pose an urgent threat to British interests

Peaceful options to war had not been exhausted

The process of identifying the legal basis was “far from satisfactory”

One Year Ago — Sir John Chilcot: “Tony Blair ‘not straight’ with UK over Iraq”