“The Story of the Hagelin Cryptos could never have been written if Russia after the revolution had become a democratic republic. The expected defeat of the Bolshevik minority and the return of a moderate government would have caused me to remain an employee of the Nobel Brothers Oil Production Company, and there would have been no CRYPTO-AG.”

[“If I could tell you what I did in my life — which I cannot —  you would think that I am the greatest spy of the century.”] 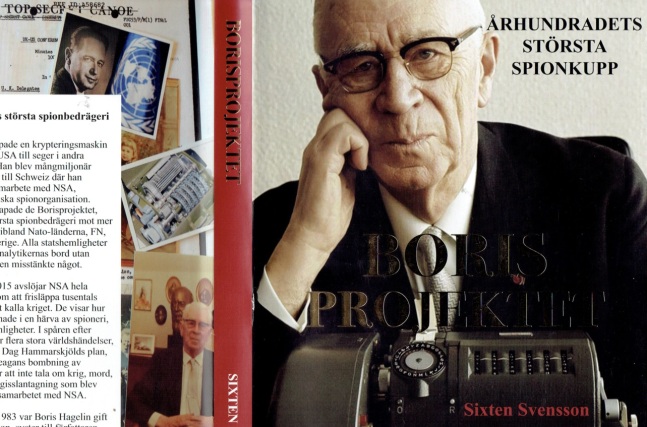 Sixten Svensson is a retired Swedish journalist and the brother-in-law of the late Boris Hagelin. Sixten has been my primary source of information on Boris Hagelin and Crypto AG over the last 15 years. His book — The Boris Project — is a magnificent piece of research.

March 27 2020 — If you read his Wikipedia page, Boris Hagelin appears to have been a rather ordinary businessman who established a very successful company in Switzerland. But appearances can be deceptive. Boris Hagelin was one of the greatest US spies of the 20th century. Bits of his extraordinary life have begun to emerge recently but much is still classified.  Follow us on Twitter: @INTEL_TODAY

Methodology — Writing a biography (even a short one) is never an easy task. But writing the biography of a spy — let alone the 20th century’s greatest spy — is a formidable endeavour.

I will therefore proceed very slowly, posting no more than one or two paragraphs at the time.

I will leave about a week between updates, allowing readers and experts enough time to comment and provide corrections when necessary.

If disagreements persist on some issues, I will indicate the alternative view(s) in the references.

Karl Wilhelm Hagelin — a Swedish citizen —  was born in St. Petersburg in 1860.

In 1879, he joined the Nobel Brothers Oil Production Company, just founded by Emanuel Nobel, an older brother of the famous Alfred Nobel.

In 1899, Karl Hagelin became director of the company, and he moved with his family to St. Petersburg.

His son Boris Caesar Wilhelm Hagelin was born on July 2 1892 in Adschikent, a small town near Baku in Azerbaijan. [1]

Boris Hagelin attended a Russian school until 1904, when his father sent him to a Swedish school.

After finishing high school, Boris entered the Royal Technical University in Stockholm where he graduated in 1914 with a degree in mechanical engineering.

The Hagelin family in 1962. In front: Boris Hagelin, his wife Annie and their daughters. Back, from left to right: Boris Jr., Karl Wilhelm and Carl. Courtesy from Sixten Svensson [Copyright]

Only their younger son Boris “Bo” Hagelin worked at the company. [Bo was injured in Washington DC during a car crash and died on November 17 1970. ]

“My son Boris Jr., who met a tragic death in 1970, had an inventive mind, and his contributions when the post-war CX-type was  designed  were  very  important.” [The Story of Hagelin-Cryptos — Boris Hagelin (1981)]

Annie Katarina Wilhelmina Hagelin (DOB 1888) died in 1966. Boris was looking for an unmarried nurse who could travel with him around the world. 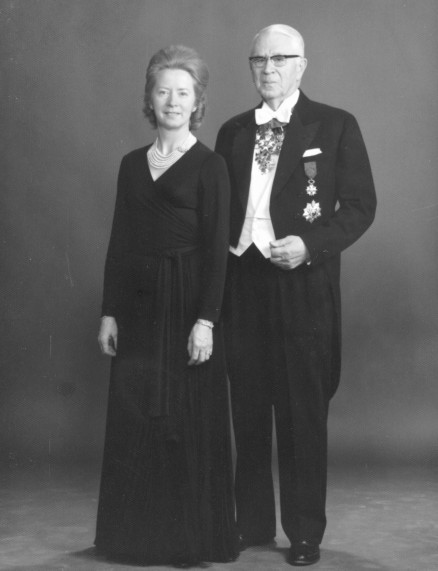 Boris and Elsa Hagelin at the 1980 the Nobel Prizes Ceremony

Boris Hagelin died on September 7 1983. During his final years, he wrote his secret memoirs which should be published 50 years after his death.

[1] — Because he was born in Adschikent, a small town near Baku in Azerbaijan, which was at the time part of the Russian Empire, it is often reported that Boris Caesar Wilhelm Hagelin was Russian-born. This is not correct.

Citizenship of Sweden is based primarily on the principle of jus sanguinis. In other words, citizenship is conferred primarily by birth to a Swedish parent, irrespective of place of birth.

Sixten Svensson is a retired Swedish journalist and the  brother-in-law of the late Boris Hagelin. Sixten has been my primary source of information on Boris Hagelin and Crypto AG over the last 15 years. His book — The Boris Project — is a magnificent piece of research.

Boris Hagelin, The Story of Hagelin Cryptos — English translation of the above. (Spring 1981)