“My son Boris Jr., who met a tragic death in 1970, had an inventive mind, and his contributions when the post-war CX-type was  designed  were  very  important.”

The Story of Hagelin-Cryptos — Boris Hagelin (1981)

“Even the vice president of the BND assumed that Boris Hagelin Jr. was not the victim of an accident. It was an intelligence murder.” 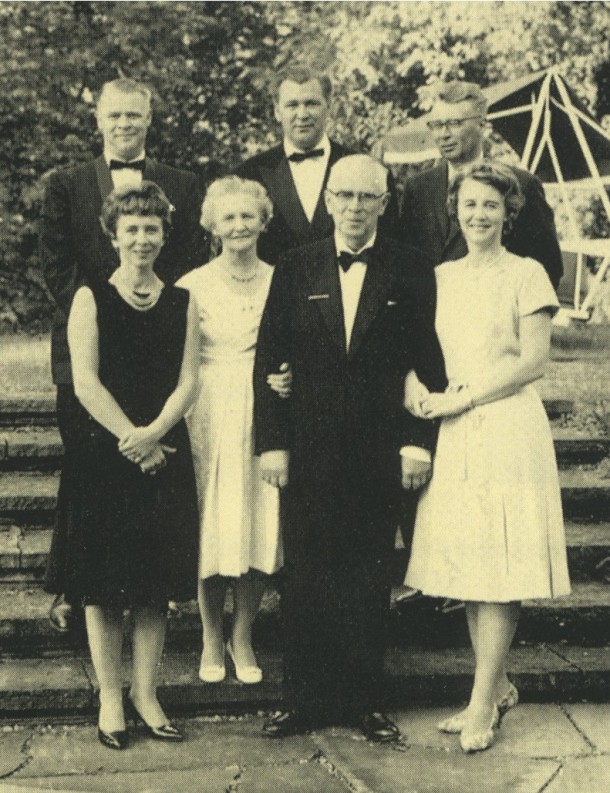 The Hagelin family in 1962. In front: Boris Hagelin, his wife Annie and their daughters. Back, from left to right: Boris Jr., Karl Wilhelm and Carl. Courtesy from Sixten Svensson [Copyright]

February 14 2020 — A decade ago, I argued that Crypto AG had rigged the equipment used by diplomats around the world allowing US Intelligence Agencies to decode in real-time their messages. This week,  Swiss public broadcaster SRF Rundschau, German public broadcaster ZDF and the Washington Post have confirmed many details of the story after gaining access to a classified, comprehensive CIA history of the operation codenamed “Thesaurus” and later “Rubicon”. There are many issues to discuss. I will address them one at the time. In this post, I will review the suspicious circumstances regarding the death of Boris Hagelin Jr. just a few months after the Swiss Company was sold to the CIA. Follow us on Twitter: @INTEL_TODAY

RELATED POST: Boris Hagelin — The Swiss Businessman Who Sold The World Out

RELATED POST: Two Years Ago — Blast From The Past : The NSA & the CRYPTO AG Sting (And why it matters to Dag Hammarskjöld murder investigation)

RELATED POST: CRYPTO AG — “MINERVA A History” : A Genuine CIA Report or a Piece of Disinformation?

UPDATE (February 27 2020) — Last week, I told you that I was a bit surprised that the Washington Post barely mentions the suspicious death of Boris “Bo” Hagelin Jr. and the fact that the author summarily dismisses any doubt regarding the official version of event.

“Hagelin was killed in a car crash. (…) There were no indications of foul play.” There is no “there” there. End of the story. Move on.

A week later, I am still surprised, but at a much higher level. Indeed, I now know that one of the files seen by the journalists invites the readers to reach a very different conclusion.

According to a piece published by ARGOS — De cryptoleaks van CIA en BND: ‘Dit was de inlichtingen-coup van de eeuw’ — someone had noticed that Operation Rubicon was surrounded by a fair number of suspicious deaths.

[Note — Please, keep in mind that I am translating from Dutch into English a document that is written in German. So, I have chosen to stick with an almost word-for word translation. I have asked to be granted access to this part of the original file.]

“A German intelligence service document points out that a number of murders, suicides and sudden deaths are associated with Operation Rubicon.

In November 1970, Boris Hagelin junior, the son of the founder and owner of Crypto AG, died in a never cleared up car accident on the Washington Beltway in America. He did not want to cooperate with the NSA.

An NSA employee allegedly told a journalist about his involvement in manipulating the Crypto AG devices.

This NSA man and the journalist died the same year from non-natural cause.

An attack in Karachi, Pakistan, during which another NSA employee Gary C. Durrell was shot in March 1995  is believed to be related to Crypto AG.

The document quotes a former vice president of the BND:

“The number of deaths surrounding Crypto AG is disproportionately high.”

Peter Frutiger (84) — who until last week was only known as “Mister X” — was head of development and deputy director at Crypto AG until 1977. The CIA wanted to recruit him.

At the beginning of the 1970s, they offered him a six-digits salary, plus a single-family home with a swimming pool in a closed residential complex north of Boston.

Frutiger turned down the offer. On April 28, 1977, he resigned from Crypto AG. And soon, he was receiving death threats. Frutiger believes that these threats were direct warnings from the CIA. [Note: Meetings between Frutiger and the CIA can be documented.]

Frutiger does not believe that Boris Hagelin Jr. died in an “accident”. According to him, his father never believed that story either and he spent many years researching this affair.

In May 2017, people broke into his house. The “burglars” stole nothing but searched for documents.

Frutiger suspects that this robbery is related to the sale of Crypto AG. He believes that the CIA wanted all his documents destroyed.

In the aftermath of the robbery, Frutiger’s wife suffered a nervous breakdown. A few weeks later, she passed away.

For decades, she had warned her husband:

“When the truth comes out, there will be troubles.”

So, here we are. Why has the Washington Post decided not to tell their readers that the Minerva Files contain disturbing information about a series of suspicious deaths?

I believe they acted under instruction from the CIA. Pull that thread, and you will understand quite a few mysteries. Stay tuned!

Over the last two decades, I have noticed that, more often than not, the very same facts are understood and reported very differently in the US and in Europe. The Crypto AG scandal is no exception.

Let us consider the story of Boris “Bo” Hagelin Jr. who died in rather suspicious circumstances.

The Washington Post barely mentions the event and summarily dismisses any doubt regarding the official version of his  death.

“Hagelin had once hoped to turn control over to his son, Bo. But U.S. intelligence officials regarded him as a “wild card” and worked to conceal the partnership from him. Bo Hagelin was killed in a car crash on Washington’s Beltway in 1970. There were no indications of foul play.”

That paragraph is about half a percent of the entire piece… On the other hand, SRF Rundschau covers the subject more extensively, discussing the background of this event from about 9′ to 12′. That is about 5% of the entire documentary.

And if no evidence of “foul play” is reported, the documentary makes it clear that the BND assumed that Bo had been assassinated.

” (…) while stranded in Buenos Aires, Boris Hagelin Jr. confided that he thought his father had been wrong to accept rigging the Crypto AG machines.

Stunned by the revelation, the engineer decided to take this matter directly to the head of Crypto AG. Boris Hagelin confirmed that the encryption methods were unsafe.

‘Different countries need different levels of security. The United States and other leading Western countries required completely secure communications. Such security would not be appropriate for the Third World countries that were Crypto’s customers,’ Boris Hagelin explained to the baffled engineer.”

On that day, Bo had crossed the Rubicon.

His father felt betrayed. Boris Hagelin never forgave and he never talked to his son again.

There is no doubt that the CIA decided to get rid of him — at least from a legal point of view — and decided to take over the company knowing that their old partnership with Crypto AG could not survive with Bo at the helm.

On January 15 2012, Sixten Svensson — Brother-in-law of the late Boris Hagelin — told me the following:

“Boris Hagelin Junior was killed in Washington DC and died 17.11.1970. He lived 3 weeks in hospital before, but brain-dead.”

Like many, Svensson initially suspected foul play. But after years of research, he now believes that Bo may have actually committed suicide as the result of the dispute with his father and the sale of Crypto AG.

One thing is certain. Prior to his death, Bo made certain arrangements regarding his twin daughters that appear to imply that he did not expect to live much longer…

The big question for the CIA and the BND is how they will keep their secret deal with the new management.

Clearly, Boris Hagelin Jr. was the natural successor. However, he made it very clear that the company would not continue his father’s dirty business with the spooks.

A CIA document puts it rather bluntly:

“He [Boris Hagelin Jr.] was viewed (…) as a wild card in the deck who, if he discovered the true arragements, might try to derail them.”

Against the will of his son, Boris Hagelin decided to sell Crypto AG. The CIA and the BND bought the company on June 4 1970 for 25 million Swiss francs.

Hagelin Sr. then resigned from the board. Beside himself, only Boris Jr. and Sture Nyberg — to whom Hagelin had turned over day-to-day management — knew the CIA and the BND had acquired Crypto AG.

(Neither the Washington Post nor ZDF could locate Nyberg or determine if he is still alive.)

In November 1970, Boris Hagelin Jr. was killed in a car accident in Washington DC.

Boris Hagelin tried for many years to uncover the truth… Unsuccessfully.

“He was letting them know that he was marching to a different drummer and you couldn’t do it back then. He was a man who was profoundly, profoundly distressed about what he was learning……..and he was dangerous.

Back then, if you thought somebody was detrimental to the cold war, you had no problem dealing with them.”

The words, it seems, apply perfectly to Boris Hagelin Jr. as well.

So, did the CIA assassinate Boris Hagelin Jr. ? Although there is — yet — no evidence, one thing is certain.

The CIA must have felt immensely relieved upon hearing the news of his death.

What do you think?

Intel Today would like to know what you think. Do you believe that Boris Hagelin Jr was murdered by the CIA?

The documentary ends with an interesting quote from Boris

Hagelin himself: “I am the 20th century’s greatest spy.”

Until this week, that quote was posted on the Intel Today blog…

Hagelin’s memoirs are expected to be published in 2033.

NB: If your German is a bit rusty, you can use the auto-translate feature to your preferred language. The ‘German to English’ option does a fairly good job.

[1] — Erich Schmidt-Eenboom is a well-known secret service expert and has published numerous books and articles on that matter. He is head of the Research Institute for Peace Policy in Bavaria.

Crypto AG — Was Boris Hagelin Jr Murdered by the CIA?