“Dresden is the largest unbombed city the enemy has got. The intention of the attack is (…) to show the Russians when they arrive what Bomber Command can do.”

“The Dresden atrocity, tremendously expensive and meticulously planned, was so meaningless, finally, that only one person on the entire planet got any benefit from it. I am that person. I wrote this book, which earned a lot of money for me and made my reputation, such as it is… One way or another, I got two or three dollars for every person killed. Some business I’m in.”

Kurt Vonnegut — About Dresden and his famous novel Slaughterhouse-Five 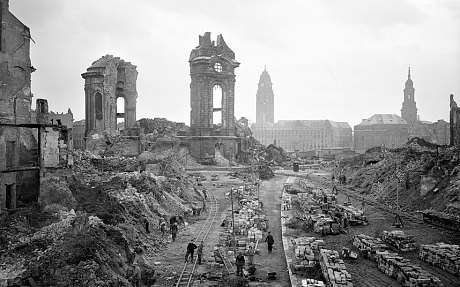 February 13 2020 — From February 13 to February 15 1945, during the final months of World War II (1939-45), Allied forces bombed the historic city of Dresden, located in Eastern Germany. I regard the bombing of Dresden as a war crime. I understand that one may disagree with me on this issue. Anyone is entitled to his own opinion. However, I expect everyone to acknowledge the facts because no one is entitled to his own facts. Just because you are a former CIA Director does not allow you to ignore History and to make your own “In-facts”.  Follow us on Twitter: @INTEL_TODAY

RELATED POST: Spooks & The Media — How The Spooks Take Over The News

RELATED POST: Should You Trust The New York Times and Its Official Sources?

The bombing was controversial because Dresden was neither important to German wartime production nor a major industrial center.

Indeed, before this massive air raid, the ancient city had not suffered a major Allied attack.

“On this night, 1,300 Royal Air Force Lancaster bombers descended on Dresden in two waves, dropping more than 1,400 tons of high-explosive bombs and more than 1,100 tons of incendiaries, destroying 90 per cent of the city and killing thousands of people.

The city’s air defences were so weak that only six planes were shot down.

The more the city burned, the more oxygen was sucked in – and the greater the firestorm became.

It is estimated that the temperature reached 1,800 degree Fahrenheit.

The following morning, as fire-fighters tried to tackle the inferno, 529 bombers of the USAAF (U.S. air force) attacked, causing even greater chaos. On February 15, another 200 U.S. bombers continued their assault on the city.

All told, bombers of the U.S. Eighth Air Force dropped more than 950 tons of high-explosive bombs and more than 290 tons of incendiaries on Dresden.

Given the high number of civilian casualties – estimates now ranging from 35,000 to 135,000 – and the relatively few strategic targets, some have called the bombing of Dresden a war crime.

However, both the British and the American militaries defended the bombing as necessary.”

PS: Please, feel free to send a tweet to former CIA Director John McLaughlin… You can see and hear his statement in this post.

Flying Forts of the 8th American Army Air Force were on their way to Dresden, as a follow up for the night raid which had been carried out by the RAF.

When the Royal Air Force went to Dresden on the night of 13th/14th February, their force consisted of more than eight hundred Lancasters and other heavy bombers.

Ancient Dresden Reduced to Rubble — On This Day