“What’s the cadet motto at West Point? You will not lie, cheat, or steal, or tolerate those who do. I was the CIA director. We lied, we cheated, we stole. We had entire training courses.  It reminds you of the glory of the American experiment.” 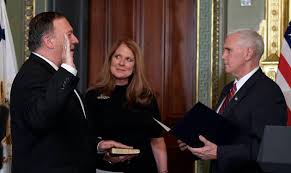 Vice President Mike Pence swears in Mike Pompeo as the Director of the Central Intelligence Agency in the Vice President’s Ceremonial Office in the Eisenhower Executive Office Building of the White House, Jan. 23, 2017. Pompeo’s wife Susan holds the Bible for the swearing in. (White House Photo by Ben Applebaum)

January 23 2020 — Mike Pompeo was sworn in January 23 2017 as Director of the Central Intelligence Agency by Vice President Mike Pence in a ceremony at the White House, thus becoming the 6th Director of CIA.  Pompeo was confirmed as Secretary of State on April 26, 2018, and was sworn in the same day. Follow us on Twitter: Intel_Today

RELATED POST: One Year Ago — The long history of CIA involvement in the international narcotics trade — [Documentary]

UPDATE (January 23 2020) — On several occasions, I told you that Pompeo, while serving as the CIA Director, was clearly lying about simple well documented facts.

On April 15 2019, while participating in a Q&A discussion at Texas A&M University, Pompeo admitted that much. Here are his own words.

QUESTION: Hi, Mr. Secretary. My name is Ben Allen (ph), and I’m a civil engineering student. My question for you is: How do you balance condemnations with concessions in diplomacy with a controversial government such as Saudi Arabia? Thank you.

SECRETARY POMPEO: So I always begin with a deep understanding that no secretary of state gets through their first day without recognizing it’s a tough world out there. We don’t appreciate how glorious it is to be here in the United States of America on a consistent enough basis and with enough fervor. Maybe you do here at Texas A&M, but I think too many Americans don’t understand how blessed we are. These are – are many, many tough places out there.

Having said that, not all tough places are the same. They each present a different set of challenges. I – it reminds me, you would know this as – it’s a bit of an aside. But in terms of how you think about problem sets, I – when I was a cadet, what’s the first – what’s the cadet motto at West Point? You will not lie, cheat, or steal, or tolerate those who do. I was the CIA director. We lied, we cheated, we stole. (Laughter.) It’s – it was like – we had entire training courses. (Applause.) It reminds you of the glory of the American experiment.

I also suggested long ago that “Pompeo’s specific brand of evangelical Christianity, with its insistence on seeing Muslim-Christian relations as an apocalyptic holy war, could lead to very dangerous decisions.

There are reasons to believe that President Trump’s decision to assassinate General Qassem Soleimani on 3 January 2020 was pressed upon him by Pompeo.

Keep in mind that, as early as September 2017, Pompeo had sought authority for the CIA to make covert drone strikes without the Pentagon’s involvement. Only God knows how this “Iranian” crisis will end…

In this short ‘Biography’ of Pompeo, I am listing in chronological order the various posts I published about the former CIA director during his tenure at the Agency. Enjoy!

On January 24 2017, Director Pompeo began his first day at Langley by convening the CIA leadership team, receiving substantive briefings, and engaging the workforce.  Director Pompeo sent the following message to all CIA employees that morning.

“Last night, I had the honor of a lifetime by being sworn in as the 22nd Director of the Central Intelligence Agency. I come to the Agency as a longtime admirer, well acquainted with your skill, courage, and dedication during my years on the House Intelligence Committee.

I am humbled by having been entrusted with this post, and I feel deeply privileged to be given the opportunity to serve with you. Likewise, I am mindful that I follow the directorship of a distinguished CIA veteran, consummate intelligence officer, and devoted patriot.

“Over the past few weeks, I have had the opportunity to speak with nearly every living former Director. To a person, they emphasized one point above all others: the extraordinary talent of the CIA workforce—something I appreciate from firsthand knowledge. They all said it was the best job they had ever had. I would be remiss if I did not mention former director and President George H.W. Bush and his wife, Barbara, who are both in our prayers today. President Bush told me that being Director was his second favorite job, but I did not really believe him. Each of these leaders has been so kind to help me prepare for this day. They love you. They know your strength comes from many sources: a legendary can-do spirit, sophisticated tradecraft, and rock-solid integrity, among others.

“I want to hear from you—and learn from you—as I gain a greater understanding of the Agency’s opportunity to improve how we keep America safe. Our first opportunity to get together as a full group will be later this week in the auditorium. I look forward to that first conversation. After many weeks of anticipation, I am eager to join you, energized by the prospect of what we will achieve together.”

On November 18, 2016, President-elect Donald Trump announced that he would nominate Pompeo to be the Director of the Central Intelligence Agency.

In February 2017, Pompeo travelled to Turkey and Saudi Arabia. He met with Turkish President Recep Tayyip Erdoğan to discuss policy on Syria and ISIL. 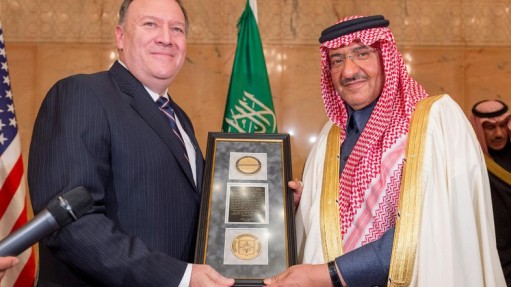 On 10 February 2017, CIA Director Mike Pompeo honored the Saudi Crown Prince with the CIA ‘George Tenet’ Medal during a meeting in Riyadh.

It was the first reaffirmation of Saudi Arabia–United States relations since Trump took office in January 2017.

In March 2017, Courtney Simmons Elwood was announced as President Donald Trump’s nominee for General Counsel of the Central Intelligence Agency. She was confirmed by the Senate with a vote of 67-33 on June 6 2017. Pompeo issued an official statement.

In March 2017, Pompeo formally invoked executive privilege to prevent CIA officers, including Gina Haspel and James Cotsana, from being compelled to testify in the trial of Bruce Jessen and James Elmer Mitchell.

On April 13 2017, CIA Director Mike Pompeo  delivered his first public speech at the Center for Strategic and International Studies in Washington.

Pompeo famously denounced WikiLeaks as a “hostile intelligence agency”. (During the campaign, Pompeo had said that he likes Wikileaks!)

On July 11 2017, CIA Director Mike Pompeo was the keynote speaker at the Intelligence and National Security Alliance (INSA) dinner, and was afterward interviewed by Charlie Allen, a senior intelligence adviser at INSA.

Director Pompeo talked about his goals for the CIA and national security threats, including ISIS, North Korea and Iran. Other topics included Russian interference in the 2016 U.S. election.

The text of the speech has been posted on the CIA website on July 11 2017 and ‘updated’ on July 14 2017. The version currently posted does not correspond to what Pompeo actually said regarding the Khan Shaykhoun chemical attack.

In July 2017, Mike Pompeo spoke in a wide-ranging conversation at the Aspen Security Forum, an annual gathering of intelligence and national security officials and experts in Aspen, Colorado.

In August 2017, Pompeo took direct command of the Counterintelligence Mission Center, the department which helped to launch an investigation into possible links between Trump associates and Russian officials.

Former members of the US IC expressed concern since Pompeo is known to be an ally of Trump.

In September 2017, Pompeo sought authority for the CIA to make covert drone strikes without the Pentagon’s involvement, including inside Afghanistan.

On October 4, 2017, Pompeo delivered the opening speech at the Conference on the Ethos and Profession of Intelligence at George Washington University.

On October 24 2017, at Trump’s request, Pompeo met with former NSA official William E. Binney to discuss his doubts of Russian interference in the 2016 United States elections.

On January 23 2018 — exactly one year into his tenure at the Central Intelligence Agency  — Director Mike Pompeo took the stage at the American Enterprise Institute (AEI) to reflect on his first year leading the Agency and discuss hot topics with AEI Resident Fellow Marc Theissen.

The meeting between CIA director Mike Pompeo and Kim Jong Un marked the highest level US contact with North Korea since 2000.

North Korean Chairman Kim Jong-un and U.S. President Donald Trump met at the Capella Hotel, Sentosa, Singapore on June 12 2018. This was the first-ever meeting between leaders of North Korea and the United States.

President Donald Trump nominated Pompeo as Secretary of State in March 2018, with Pompeo succeeding Rex Tillerson after his dismissal.

Pompeo aka the American Pinocchio

On April 13 2017, CIA Director Mike Pompeo  delivered his first public speech at the Center for Strategic and International Studies in Washington.

While mainstream media have mostly reported that Pompeo denounced WikiLeaks as a “hostile intelligence agency”, nobody has yet pointed out that Pompeo clearly distorted historical facts to suit his narrative.

In April 2018,  Vox reported that “Pompeo’s specific brand of evangelical Christianity, with its insistence on seeing Muslim-Christian relations as an apocalyptic holy war, makes him an unnerving choice for such a senior foreign policy position.”

“During his tenure as CIA director, and before that as a member of the House of Representatives, Pompeo has consistently used language that casts the war on terrorism as a cosmic divine battle of good and evil.

He’s referred to Islamic terrorists as destined to ‘continue to press against us until we make sure that we pray and stand and fight and make sure that we know that Jesus Christ is our savior is truly the only solution for our world.’

Sources inside the CIA told Foreign Policy that Pompeo’s speeches within the CIA are no less loaded with explicitly religious language.”

At the suggestion of Tony Perkins, Pompeo planned to hire chaplains at the CIA to reduce officers’ high divorce rates.

If you wish to understand Pompeo’s views of the world —  from his unconditional support to Israel to his deep-seated hate of Iran — you can not ignore his rather peculiar ‘religious’ beliefs. This is the key to decode his moves on the geopolitical chess board.

RELATED POST: US Secretary of State Mike Pompeo: “War on Terror as a Cosmic Divine Battle”

Who is Mike Pompeo?