“J’Accuse…!” was an open letter published on January 13 1898 in the newspaper L’Aurore by the influential writer Émile Zola. In the letter, Zola addressed President of France Félix Faure and accused the government of anti-Semitism and the unlawful jailing of Alfred Dreyfus, a French Army General Staff officer who was sentenced to lifelong penal servitude for espionage.

Zola pointed out judicial errors and lack of serious evidence. The letter was printed on the front page of the newspaper and caused a stir in France and abroad. Zola was prosecuted for libel and found guilty on February 23 1898. To avoid imprisonment, he fled to England, returning home in June 1899.

As a result of the popularity of the letter, even in the English-speaking world, J’accuse! has become a common generic expression of outrage and accusation against someone powerful.  Follow us on twitter: @Intel_Today

RELATED POST: The Queen of Cuba: The two stories of Ana Montes

UPDATE (January 13 2020) — A great story will never get old. The Dreyfus Affair is a very important story that must be taught to every counter-intelligence officer. And there is always a new way to tell a great story.

David Sexton — from the Evening Standard — wrote that the movie is “an absolute masterclass in how to make an historical film”. 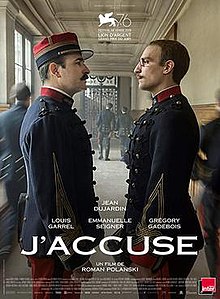 An Officer and a Spy (French: J’accuse) is a 2019 French-Italian historical drama film directed by Roman Polanski about the Dreyfus affair, with a screenplay by Polanski and Robert Harris based on Harris’ 2013 novel of the same name. It had its premiere at the 76th Venice International Film Festival on 30 August 2019, winning the Grand Jury Prize.

“The truth demands courage. 120 years later, the time has come for the army to give Alfred Dreyfus back the honor and years that were taken from him, and I will personally see that it is done. There are scars that cannot be healed,” she said.

In 1894, the French Army’s counter-intelligence section, led by Lieutenant Colonel Jean Sandherr, became aware that information regarding new artillery parts was being passed to the Germans by a highly placed spy, most likely on the General Staff. Suspicion quickly fell upon Dreyfus, who was arrested for treason on October 15 1894.

On January 5 1895, Dreyfus was summarily convicted in a secret court-martial, publicly stripped of his army rank, and sentenced to life imprisonment on Devil’s Island in French Guiana. Following French military custom of the time, Dreyfus was formally degraded by having the rank insignia, buttons and braid cut from his uniform and his sword broken, all in the courtyard of the École Militaire before silent ranks of soldiers, while a large crowd of onlookers shouted abuse from behind railings.

In August 1896, the new chief of French military intelligence, Lieutenant Colonel Georges Picquart, reported to his superiors that he had found evidence to the effect that the real traitor was a Major Ferdinand Walsin Esterhazy.

Picquart was silenced by being transferred to the southern desert of Tunisia in November 1896.

When reports of an army cover-up and Dreyfus’s possible innocence were leaked to the press, a heated debate ensued about anti-Semitism and France’s identity as a Catholic nation or a republic founded on equal rights for all citizens.

Esterhazy was found not guilty by a secret court martial, before fleeing to England.

Following a passionate campaign by Dreyfus’s supporters, including leading artists and intellectuals, he was given a second trial in 1899 and again declared guilty of treason despite the evidence in favor of his innocence.

However, due to public opinion, Dreyfus was offered and accepted a pardon by President Émile Loubet in 1899 and released from prison. This was a compromise that saved face for the military’s mistake.

On July 12 1906, Dreyfus was officially exonerated by a military commission.

In an article (The Lessons for CI of the Dreyfus Affair) posted on the CIA website (Intelligence in Public Literature), John Ehmman writes:

“Is there anything new to be learned about the Dreyfus affair? More than 115 years have passed since Dreyfus was convicted of treason, and it has been more than a century since he was exonerated.

With the facts of the case long settled, the archives thoroughly mined, and hundreds of books and articles published, it would seem unlikely that there is much left to be discovered or said.

As the appearance of three new books within a year indicates, however, scholars still can find new ways to look at the affair and draw fresh insights from it.”

The Dreyfus affair was indeed the first modern Counter-Intelligence  disaster, not just an investigative and legal error, but one that spilled over from the intelligence world into the sphere of mass politics.

Sadly, some people still believe that Dreyfus was guilty. In 1994 — 100 years after Dreyfus was charged — a French Army historian cast doubt on Dreyfus’s innocence by describing it as “the thesis now generally accepted by historians”.

This entry was posted in Dreyfus and tagged Alfred Dreyfus. Bookmark the permalink.