“It is striking to note the similarity of the ‘scientific’ evidence discovered by the FBI’s Tom Thurman in both the Lockerbie and UTA cases. Of the tens of thousands of pieces of debris collected at each disaster site, one lone piece of printed circuit was found and, miracle of miracles, in each case the fragment bore markings that allowed for positive identification: MEBO in the Lockerbie case and TY in the case of UTA Flight 772. Despite the common findings of the DCPJ, the DST and the Prefecture of Police crime laboratory, Judge Bruguière chose to believe Thurman, the expert in fabricating evidence.”

“This is — of course — US/UK pure propaganda. Libya has nothing to do with Lockerbie whatsoever! Only an imbecile would buy this utter nonsense. Imbeciles… And US lawyers, of course! But I repeat myself.” 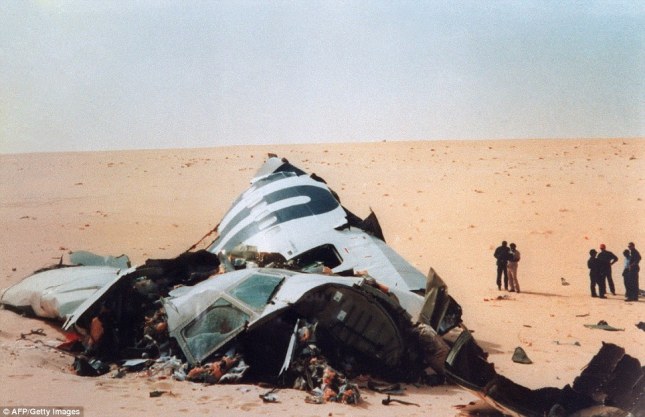 Rescuers stand near the wreckage of the French UTA DC-10 flight 772 in the Tenere desert, on September 22, 1989

September 19 2019 — It has been called the greatest murder investigation in French history. When a suitcase bomb destroyed French Airlines UTA Flight 772, killing all 170 passengers and crew on board, it triggered a decade long search for accountability. Where are the French journalists? Have you all given up on finding the truth? For God sake, wake up and do your job! Follow us on Twitter: @INTEL_TODAY

UPDATE (September 19 2019) — You may find this story hard to believe. So, I encourage you to think about this post-Gaddafi mystery.

Moussa Koussa previously headed the Mukhabarat el-Jamahiriya (national intelligence agency) from 1994 to 2009, and was considered one of the country’s most powerful figures and a member of Gaddafi’s inner circle.

When he arrived in the United Kingdom in March 2011, the UK Foreign and Commonwealth Office released an official statement saying that Koussa no longer wished to represent the Libyan government and intended to resign.

RELATED POST: One Year Ago — Clinton’s Emails: Moussa Koussa and The “Lockerbie Bomber”

No charges were pressed against him by the British government, and in the following months financial sanctions on him were lifted by the Obama administration. [Wikipedia]

“Last June, L’Express, a French weekly, reported that investigators had concluded that both the Pan Am and U.T.A. bombings were planned at a meeting in Tripoli in September 1988 attended by Mr. Senoussi and Mr. Koussa.” [NYT October 31 1991] 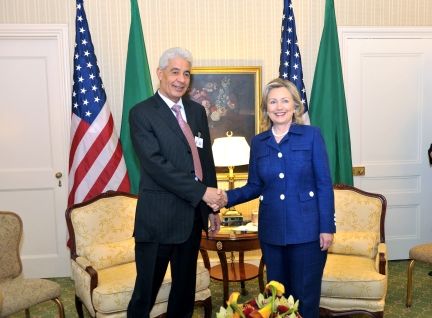 Moussa Koussa with Hillary Clinton in 2010

Scottish prosecutors interviewed Koussa about the Lockerbie bombing, and found no judicial reason or evidence to hold him in captivity. French investigators did not even questioned Koussa, despite the demand from the families.

Pierre Péan, one of the greatest French investigative journalists, died on July 25 2019.

He also accused Thomas Thurman, a Federal Bureau of Investigation explosives expert, of fabricating false evidence against Libya in both the Pan Am Flight 103 and UTA Flight 772 sabotages.

UTA Flight 772 of the French airline Union de Transports Aériens was a scheduled international passenger flight operating from Brazzaville in the People’s Republic of the Congo, via N’Djamena in Chad, to Charles de Gaulle Airport in Paris.

On Tuesday, 19 September 1989 the McDonnell Douglas DC-10 aircraft took off from N’Djamena International Airport at 13:13. Forty-six minutes later, at its cruising altitude of 10,700 metres (35,100 ft), a bomb explosion caused UTA Flight 772 to break up over the Sahara Desert 450 km east of Agadez in the southern Ténéré of Niger. All 156 passengers and 14 crew members died.

In 1999, the six Libyans were put on trial in the Paris Assize Court for the bombing of UTA Flight 772. Because Gaddafi would not allow their extradition to France, the six were tried in absentia and were convicted.

On 5 September 2012, the country of Mauritania extradited Abdullah Senussi to Libyan authorities.

Senussi is to be tried in Libya for crimes he allegedly committed during the time he was the close assistant to Gaddafi.

Senussi appeared in a Libyan court for a pre-trial hearing on 19 September 2013.

On 11 October 2013, the International Criminal Court ruled that he can be tried in Libya and lifted their warrant.

In July 2015, Senussi was sentenced to death by a Libyan court; the case was under appeal as of October 2015 and was seen by the United Nations and Libyan government as an unfair trial.

After the defense’s appeal, Senussi was offered amnesty in return for National Reconciliation. [BBC ]

He accuses judge Jean-Louis Bruguière of deliberately neglecting proof of Lebanon, Syria and Iran being involved to pursue only the Libyan trail.

Scottish prosecutors are believed to have recently identified Senussi as one of two new suspects in the on-going investigation into Lockerbie and have requested permission from the Libyan authorities to interview him in Tripoli.

They believe the two suspects acted along with Abdelbaset al-Megrahi – the only person to have been convicted of the atrocity. Senussi is thought to have recruited Megrahi, who died in 2012.

Both Megrahi and Senussi were members of one of Libya’s biggest tribes, the Magarha.

This is — of course — US/UK pure propaganda. Libya has nothing to do with Lockerbie whatsoever! Only an imbecile would buy this utter nonsense. Imbeciles… And US lawyers, of course! But I repeat myself.

The Forgotten Flight Remembered: The Story of UTA Flight 772

In his new book, “The Forgotten Flight,” author Stuart Newberger remembers one of the deadliest terrorist attacks in history from his unique vantage point as the attorney who represented the families of the seven Americans killed.

And that is a fine piece of fiction! Utter nonsense!

Guest — Stuart Newberger is a Washington-based senior partner with the international law firm of Crowell & Moring. His practice centers on handling complex international disputes, many involving the actions of governments. He has over 30 years of “first-chair” experience as a trial and appellate advocate in the U.S. courts, as well as international arbitration venues around the world, including ICSID, PCA, ICC, ICDR, AAA, SCC, LCIA, Austrian Federal Economic Centre and ad hoc proceedings pursuant to the UNCITRAL rules.

He founded the firm’s “International Dispute Resolution” practice. He is the author of “The Forgotten Flight: Terrorism, Diplomacy and the Pursuit of Justice,” a book on the investigation into the terrorist attack on UTA Flight 772 and the long fight for victims’ families to obtain justice.

Host — John Milewski is the executive producer and managing editor of Wilson Center NOW and also serves as director of Wilson Center ON DEMAND digital programming. Previously he served as host and producer of Dialogue at the Wilson Center and Close Up on C-SPAN. He also teaches a course on politics and media for Penn State’s Washington Program.

This entry was posted in Aviation Disasters and tagged Pierre Péan, UTA Flight 772. Bookmark the permalink.