“The truth is cruel.. Agents of the DGSE sank this boat [Rainbow Warrior]. They acted on orders.”

“Governments lie. They do it all the time. And, much as we’d like to believe otherwise, the US government is no exception. There were times when we may have believed otherwise. But after Vietnam and Watergate, we know better.” 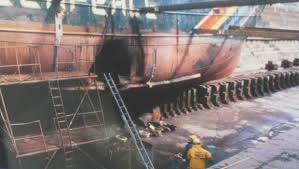 August 26 2019 — On August 26 1985, the French government denied any knowledge of the attack on Rainbow Warrior. A month later, the French Prime Minister confessed the role of the DGSE, the French Foreign Intelligence agency. Follow us on Twitter: @INTEL_TODAY

RELATED POST: Who Is Who in World Intelligence and Security Agencies : DGSE ORGANIZATION CHART

The Rainbow Warrior was in Auckland, New Zealand preparing to sail to Mururoa Atoll to continue protesting against French nuclear testing in the Pacific.

The French government initially denied all knowledge of the operation, but it soon became obvious that they were involved.

Eventually, prime minister Laurent Fabius appeared on television and told a shocked public: “Agents of the DGSE (Secret Service) sank this boat. They acted on orders.”

Following the attack, two DGSE officers, Dominique Prieur and Alain Mafart, were arrested on 24 July. Both were charged with murder, pleaded guilty to manslaughter and were sentenced to 10 years’ imprisonment.

The case caused the French government considerable embarrassment. While the attack was on an international organisation and not New Zealand as such, most Kiwis did not make this distinction.

The fact that it was carried out on New Zealand territory by a supposedly friendly nation caused outrage and seriously compromised relations between New Zealand and France.

1985-09-22 — French Prime Minister Laurent Fabius appears on TV to confess “Agents of the DGSE sank this boat [Rainbow Warrior]. They acted on orders.”

Thirty years ago, French secret service blew up Greenpeace’s flagship Rainbow Warrior ship in Auckland, New Zealand, killing a Portuguese photographer, as the ship was preparing to head to sea to protest against French nuclear bomb tests in the South Pacific.

Now the French intelligence agent who led the deadly attack has come forward for the first time to apologize for his actions, breaking his silence after 30 years.

On July 10, 1985, Jean-Luc Kister led the dive team that planted the bombs on the Rainbow Warrior that sunk the ship and killed Greenpeace photographer Fernando Pereira.

The Sinking of the Rainbow Warrior — On This Day

Sinking of the Rainbow Warrior — Wikipedia

This entry was posted in DGSE and tagged DGSE, Rainbow Warrior. Bookmark the permalink.