“Rachel was a warm and compassionate young woman, and an officer of unbounded potential. We miss her still and will remember her always. She is our 87th star.” 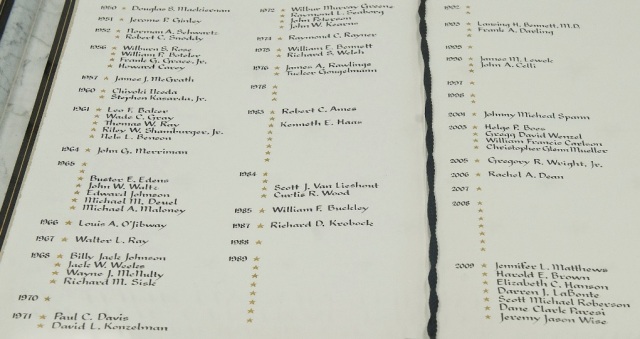 August 13 2019 — Currently, there are 133 stars carved into the marble of the CIA Memorial Wall: 93 are unclassified. Who are those men and women? When did they die? Why are they honored by a star? Follow us on Twitter: @INTEL_TODAY

During the 2007 CIA Memorial Ceremony,  four stars were added to the Wall.

Ted Gup is the author of the bestseller The Book of Honor, winner of the Investigative Reporters and Editors Book-of- the-Year Award.

The book is a very good source of information. Its Amazon page reads:

A national bestseller, this extraordinary work of investigative reporting uncovers the identities, and the remarkable stories, of the CIA secret agents who died anonymously in the service of their country.

In the entrance of the CIA headquarters looms a huge marble wall into which seventy-one stars are carved-each representing an agent who has died in the line of duty. Official CIA records only name thirty-five of them, however.

Undeterred by claims that revealing the identities of these “nameless stars” might compromise national security, Ted Gup sorted through thousands of documents and interviewed over 400 CIA officers in his attempt to bring their long-hidden stories to light.

The result of this extraordinary work of investigation is a surprising glimpse at the real lives of secret agents, and an unprecedented history of the most compelling—and controversial—department of the US government.

However, the book was published in May 2001, and the number of stars on the CIA wall has almost doubled since then.

Many of these additional stars are nameless. But even the named ones have not been the object of a systematic study, let alone a book.

Please, keep in mind that if the US Congress decides to pass the new version of the Intelligence Identities Protection Act (IIPA), writing an update of Gup’s book would most likely be illegal.

On August 28 2013, while serving in Afghanistan, she committed suicide. Again, such disclosure will no longer be possible if the expanded version of the IIPA is passed.

This being said, we now return to the subject of this post: CIA star 87.

Comment 2 — Although the name of Gregory R. Wright was not made public at the time of the ceremony, it was eventually disclosed. However, the CIA has posted contradictory pieces of information regarding his star.

Comment 3 — When the CIA honor several officers with a star during the same ceremony, I have no way of knowing the star number of a given individual. However, according to the CIA, Rachel Dean is star 87. I will therefore assume that — in such case — the stars are ranked according to the year of death.

Rachel Alexandra  Dean was a support officer who joined CIA in January 2005.

She died in September 2006 in a car accident while on temporary duty in Kazakhstan. She was 25.

Her father was on active duty with the US Navy, so she grew up experiencing life overseas.

During her junior year, Rachel studied abroad for a semester in Athens, Greece. Along with her course work, Rachel was active in several service organizations.

In 2003, she graduated with a Bachelor of Arts degree.

Rachel joined the CIA in January 2005, having earned a place in the Directorate of Support. 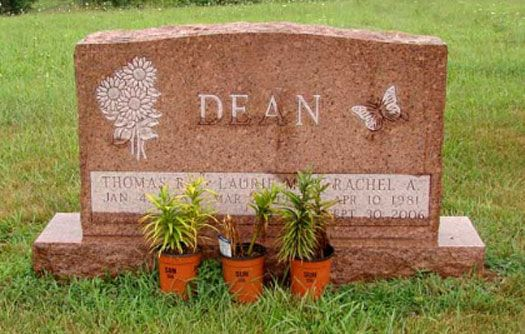 “From the start, Rachel was a hard worker, with a warm and caring personality. Her colleagues described her as the glue that held the team together. She was always eager to volunteer for an extra task.” (CIA Website)

PS: Did you know Rachel A. Dean? Would you like to share a story? Just let us know.