“The Montreal Protocol on Substances that Deplete the Ozone Layer is effective and working. Since the entry into force of this multilateral environmental agreement, there has been tremendous progress in global efforts to repair the ozone layer. As a consequence, there are now early signs that we are on the road to recovery of this precious life-support system.”

“If the emissions were to persist, then we could imagine that healing of the ozone layer, that recovery date, could be delayed by a decade.”

“It is difficult to get a man to understand something when his salary depends on his not understanding it.” 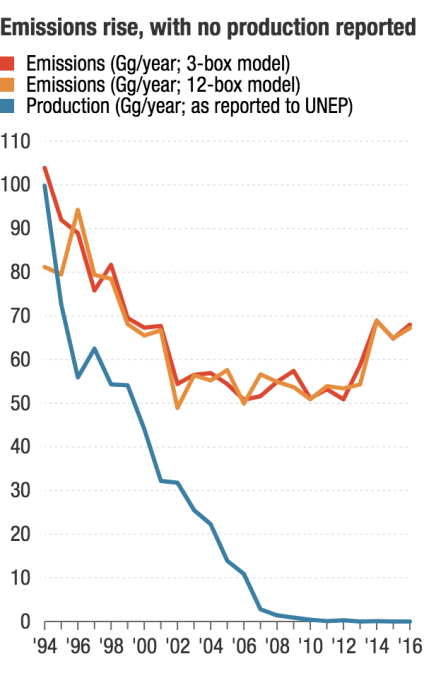 Data from an NOAA study shows that emissions of CFC-11 — as calculated using two different models — rose after 2012, even though production was supposedly phased out. (NOAA)

July 15 2018 — The Montreal Protocol is an extraordinary success and a testimony of what humankind can achieve when there is a universal will to fight for its survival. According to computer simulations, the recovery of the ozone layer in the mid-latitudes and the Arctic was anticipated around 2050 — five years later than previously estimated — while in Antarctica, recovery is expected by about 2065, about 15 years later than the previous estimate.

However, according to a recent study, published in Nature on May 16 2018, the atmospheric level of trichlorofluoromethane — also known as CFC-11 — is not declining as quickly as expected. And this is bad news because CFC-11 is a ozone-depleting chemical banned by the Montreal Protocol. Scientists with the US National Oceanic and Atmospheric Administration believe that someone is releasing thousands of tons of CFC-11 in the atmosphere.  Follow us on Twitter: @Intel_Today

RELATED POST: The Rise of the CFC — An Atmospheric Spy Thriller [UPDATE: Shame on China]

RELATED POST: One Year Ago — CIA : “Climatological Research as it Pertains to Intelligence Problems”

UPDATE (May 23 2019) — A new report, published in the prestigious journal Nature, concludes that Industries in north-eastern China have released about 7,000 tonnes of the Chlorofluorocarbon-11 (CFC-11), into the atmosphere in violation of the 1987 Montreal Protocol.

An international team of atmospheric scientists gathered additional data from monitoring stations in Japan and Taiwan. Their measurements showed ‘spikes’ in pollution when air arrived from industrialised areas in north-eastern China.

“We show that emissions from eastern mainland China are 7.0 ± 3.0 (±1 standard deviation) gigagrams per year higher in 2014–2017 than in 2008–2012, and that the increase in emissions arises primarily around the northeastern provinces of Shandong and Hebei.

This increase accounts for a substantial fraction (at least 40 to 60 per cent) of the global rise in CFC-11 emissions. We find no evidence for a significant increase in CFC-11 emissions from any other eastern Asian countries or other regions of the world where there are available data for the detection of regional emissions.”

When CFCs break down in the atmosphere, they release chlorine atoms that are able to rapidly destroy the ozone layer which protects us from ultraviolet light. A gaping hole in the ozone layer over Antarctica was discovered in the mid 1980s.

CFCs are also very potent greenhouse gases. One tonne of CFC-11 is equivalent to around 5,000 tonnes of CO2.

The 7,000 tonnes of CFC emitted by the Chinese factories equate to about 35 million tonnes of CO2 being emitted into the atmosphere every year. This is about 4 times the annual CO2 emissions of Luxembourg and one third of Belgium emissions.

PS: I would like to point out that it took one year for an international team of scientists to pinpoint the source of the emission of 7,000 tonnes  of a banned chemical.

Yet, according to UK Prime Minister Theresa May, the British Intelligence Services were able to identify in 48 hours the Russian laboratory having produced a few nano-grams of the Novichok allegedly used in the poisoning of Sergei Skripal and his daughter.

Following the publication in Nature, the Environmental Investigations Agency (EIA) launched an investigation and found widespread use of CFC-11 in China, even though the chemical was fully banned — in developping countries — back in 2010.

EIA’s calculations show that emission estimates associated with the level of use reported by these Chinese companies explain most — perhaps all — of these no longer mysterious CFC emissions.

Scientists expeced that by mid to late 21st century, the abundance of ozone-depleting gases would fall to levels last seen before the Antarctic ozone hole began to appear in the early 1980s.

But if these illegal Chinese emissions are not remedied soon, substantial delays in ozone layer recovery could be expected.

Ozone (O3) is a highly toxic gas with a strong smell. The name is rooted in the Greek verb “ozein” meaning, “to smell.” In the stratosphere, oxygen molecules absorb ultraviolet photons (UV) from sunlight and break into two oxygen atoms. These atoms subsequently recombine with oxygen molecules to produce an ozone molecule. Although it is harmful to humans in the air they breathe, its presence in the stratosphere protects them for the particularly noxious UV as they are absorbed by the ozone molecules.

In the northern hemisphere, the amount of ozone has declined 3 percent compared to the pre-1980 value for latitude comprised between 35 and 60 degrees. In the southern hemisphere, the decline is about twice as great for the same range of latitude. Ozone depletion is a term used to describe this small, yet significant, reduction of the ozone abundance.

In the early 1980s, scientists reported that the atmosphere high above the Antarctica was almost totally depleted from ozone. In 1985, Farman and his colleagues recorded a reduction of 70 percent compared to its normal value. This drastic depletion, known as the “ozone hole” worsens in the Antarctic in the spring and lasts a few months before recovering slightly.

Once observed, ozone depletion immediately raised health concerns. At mid latitudes, people were exposed to a larger dose of UV. As the ozone hole over Antarctica was growing bigger and bigger, the effect of these radiations would cause significant harm to the populations living in the southern parts of Chile, New Zealand and Australia.

The high energy range of the UV spectrum causes skin cancer through mechanisms that are well understood. Scientists have estimated than a 1 percent depletion of the ozone layer results in a 2 percent increase of these cancers.

In 2002, professors Abarca and Casiccia published the results of a 14-year study showing that the population of Southern Chile, living under the ozone hole, had experienced a 56 percent increase of melanoma and a 46 percent increase in other types of skin cancers.

In the 1950s, D. Bates and M. Nicolet discovered that free radicals such as nitric oxide, known to be present in the stratosphere, could speed up the ozone depleting reactions.

In the early 1970s, two scientists began to wonder whether human activities could modify the ozone layer. P. Crutzen pointed out that fertilizers could increase the amount of nitrous oxide in the stratosphere, thus impacting the ozone layer. H. Johnson raised the same issue concerning another source of nitric oxide: the emissions of supersonic airplane flights in the lower stratosphere.

Chlorofluorocarbons (CFCs) were invented in the 1930s. In 1970, R. Stolarski and R. R. Cicerone demonstrated that atoms of chlorine catalyzed ozone destruction with more efficiency than nitric oxide. In 1971, James Lovelock discovered that virtually all the CFCs ever manufactured were still present in the atmosphere.

In 1974, F. Rowland and M. Molina suggested that CFCs could reach the stratosphere where they would be dissociated by UV photons, thus releasing a chlorine atom. In just two years, their work had gained widespread acceptance.

For their contribution to the understanding of ozone layer depletion, Crutzen, Molina, and Rowland were awarded the 1995 Nobel Prize in Chemistry.

“The discoveries of the three researchers have an unusually close connection with the consequences of modern technology. Supersonic aircraft release nitrogen oxides in the stratosphere … CFC gases from refrigerators and air conditioners, and in the form of aerosol spray propellants — combined with a throwaway culture — result in large-scale emissions of chlorine compounds into the atmosphere. The findings presented by this year’s laureates in chemistry have had an enormous political and industrial impact. This was because they clearly identified unacceptable environmental hazards in a large, economically important sector,” reads the Noble Prize speech.

With the Montreal Protocol, the U.N. banned all ozone-depleting substances. Opened for signatures on September 16, 1987, the Treaty was ratified on January 1, 1989.

Under the terms of the Montreal Protocol, the signatory states agreed to freeze use and production of CFCs, according to a well-defined timetable. From 1991 to 1992, consumption and production of the controlled substances could not exceed 150 percent of its 1986 calculated levels. In 1993, the total amount consumed and produced was reduced to 25 percent of its 1986 values, and in 1994, these substances were totally banned in rich countries.

Due to its almost universal adoption and very fast implementation, the Montreal Protocol has been described by U.N. Secretary General Kofi Annan as “the single most successful international agreement to date.”

“In the latest of a series of scientific assessments conducted under the auspices of the World Meteorological Organization (WMO) and the United Nations Environmental Program (UNEP), more than 300 scientists from 34 countries of the developed and developing world have found clear evidence of a decrease in the abundance of ozone depleting substances in the lower atmosphere, as well as indications that their destructive impact in the stratosphere has also started to decline,” Annan said.

The Truth Behind the Success of the Montreal Protocol

Indeed, one can only wonder how the world community achieved so quickly such a feat considering the current difficulties nations face while trying to regulate the emission of greenhouse gases in order to fight global warming.

Initially, the chemical industry strongly opposed the idea that manmade chemicals had any influence on the ozone layer.

“The ozone depletion theory is a science fiction tale…a load of rubbish…utter nonsense,” said the chairman of the board of DuPont.

The inventor of the aerosol spray can valve wrote a letter to the chancellor of UC Irvine to complain about the work of Rowland.

Then, in the mid 1980s, the industry changed its position. “The chemical industry supported the Montreal Protocol in 1987 because it set up a worldwide schedule for phasing out CFCs, which [were] no longer protected by patents.

This provided companies with an equal opportunity to market new, more profitable compounds,” wrote Dr. Mostafa Tolba, a former head of the U.N. Environmental Program in the June 30, 1990, edition of The New Scientist.

On Dec. 19, 1994, the United Nations made Sept. 16 the International Day for the Preservation of the Ozone Layer.