“The Lockerbie trial is “the most disgraceful miscarriage of justice in Scotland for 100 years. Every lawyer who has read the judgment says ‘this is nonsense’. It is nonsense.” 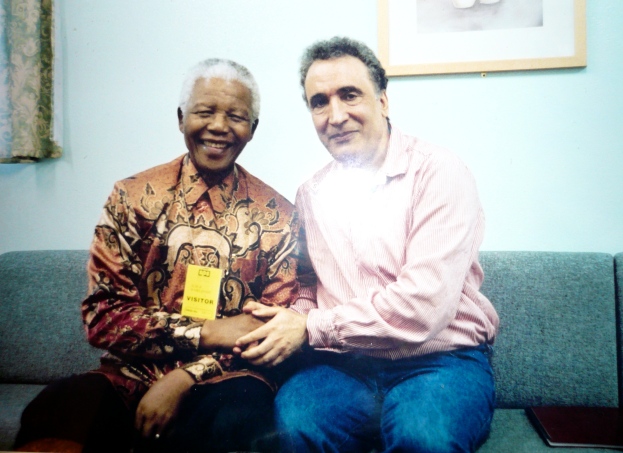 Mandela visiting Megrahi — aka the ‘Lockerbie bomber’ — in prison. Many thanks to my friend John Ashston who took the picture.

July 4 2017 — The Scottish Criminal Cases Review Commission confirmed today that it has received a new application to review the conviction in the case of Abdelbaset Ali Mohmed Al-Megrahi. Follow us on Twitter: @INTEL_TODAY

However I will argue that a far bigger story was lost on journalists and bloggers. Allow me to explain.

On March 13 2019, an application by the Scottish Criminal Cases Review Commission in relation to the Lockerbie case was heard by three judges of the High Court of Justiciary in Edinburgh.

The SCCRC sought and was granted a European Investigation Order addressed to the Federal Republic of Germany.

As explained by Professor Black, and now admitted by the media, the investigation currently being conducted by Scottish police and prosecutors into possible involvement by the East German Stasi in the Lockerbie bombing is quite separate from the investigation by the Scottish Criminal Cases Review Commission into whether Abdelbaset Megrahi’s conviction might have amounted to a miscarriage of justice.

What does the Court Order actually do?

Professor Black has kindly explained to INTEL TODAY what the Court order actually does.

“First, it grants a European Investigation Order requesting the German Federal Authorities to investigate something — we don’t know what, except that it relates to a person that is, or may, be connected to the destruction of Pan Am 103.

How the investigation is carried out in Germany is a matter for the German authorities.

Secondly, it makes an order under the Contempt of Court Act 1981 prohibiting publication of the identity and address of the person in question as well as any details of what is to be investigated.

The only basis on which such an order can properly be made is that publication might prejudice future criminal proceedings.”

What is the SCCRC actually telling us?

The SCCRC is not trying to interview, and protect, a witness. The SCCRC considers that this person could possibly be the subject of future criminal proceedings in Scotland.

Thus, the SCCRC seems to be saying that the person in question might have been involved in the destruction of Pan Am 103, and therefore, could possibly in the future be charged and tried for this crime.

What follows is the text of a press release issued today (July 4 2017) by the Scottish Criminal Cases Review Commission:

Mr Megrahi was convicted in 2001 of the murder of the 259 passengers and crew on board Pan American World Airways flight PA 103 from London to New York, and 11 residents of Lockerbie on 21 December 1988. He subsequently appealed his conviction and his first appeal was refused by the High Court in 2002.

Mr Megrahi then applied to the Scottish Criminal Cases Review Commission for a review of his conviction in 2003, and, after a full review, his case was referred by the Commission to the High Court for a new appeal in 2007. Mr Megrahi subsequently abandoned that appeal in 2009. He was released from prison on compassionate grounds shortly thereafter. Mr Megrahi died from cancer in 2012.

The Commission received a further application in June 2014, which was made on Mr Megrahi’s behalf. The Commission rejected this application in 2015, concluding that it was not in the interests of justice at that time to proceed with the review. The reasons for this were detailed in our press releases issued on 5 and 6 November 2015 (currently available on our website).

The main reason however was that despite various requests having been made of the Megrahi family, and of the late Mr Megrahi’s previous solicitors, Taylor & Kelly, for access to materials relating to the 2007-2009 appeal, these had not been forthcoming.

In rejecting the application in 2015 the Commission made it clear that it remained open in the future for the matter to be considered again by the SCCRC, but that it was unlikely that any future application would be accepted for a review unless it was accompanied by the original appeal materials to be sourced directly from Mr Megrahi`s solicitors.

Gerard Sinclair, the Chief Executive of the SCCRC, said today:

As it does in every case the Commission will now give careful consideration to this new application. In particular, we will immediately be looking to see that this fresh application fully addresses the matters which we identified as missing from the application in 2015, and in particular provides access to the original appeal papers from Mr Megrahi`s solicitors.

If the Commission accepts the application for a full review there are several important considerations which will affect the timescale within which we will be able to deal with this matter, including any new lines of enquiry and the fact that the membership of the Board has completely changed since the original referral in 2007.

The Commission does not intend to make any further comment at this time.

The Scottish Criminal Cases Review Commission was established as an independent body on 1 April 1999 to review alleged miscarriages of justice in Scottish convictions and/or sentences. Under section 194A-L of the Criminal Procedure (Scotland) Act 1995, as inserted by section 25 of the Crime and Punishment (Scotland) Act 1997, the Commission may refer a case to the High Court if it believes that a miscarriage of justice may have occurred and that it is in the interests of justice that a reference should be made. Once the Commission refers a case to the High Court, the case will proceed as a normal appeal.

About the appeal and the SCCRC

On April 24 2017, Professor Robert Black (QC FRSE) sent me his personal view on this matter which I reproduce here with his kind permission.

[Professor Robert Black has taken a close personal and professional interest in the Pan Am Flight 103 bombing of 21 December 1988, particularly because he was born and brought up in Lockerbie, Scotland. He has published a substantial number of articles on the topic in the United Kingdom and overseas. Black is often referred to as the architect of holding the non-jury Pan Am Flight 103 bombing trial at the neutral venue of Camp Zeist, Netherlands, and applying Scots Law to the Lockerbie case. Wikipedia]

I am optimistic about the outcome of the Megrahi family’s forthcoming application to the SCCRC. In June 2007 the SCCRC decided, on six grounds, that there might have been a miscarriage of justice. Since then even more evidence has come to light casting doubt on the verdict (not least Dr Morag Kerr’s masterly analysis of the bomb-damaged luggage, which demonstrates beyond reasonable doubt that the bomb suitcase was ingested at Heathrow, not Luqa in Malta).

It is possible to envisage the SCCRC saying that there have already been two appeals (the first of which Megrahi lost and the second of which he abandoned) and that it is not in the interests of justice for there to be a third bite at the cherry. I am reasonably optimistic that the Commission will not adopt this approach — the Megrahi conviction still casts a dark shadow over the Scottish criminal justice system and is far from being generally accepted as just by the public in Scotland and elsewhere.

I would expect the SCCRC to take the view that it is in the interests of justice in Scotland that an appeal take place that can remove this dark shadow, one way or the other.

SNP MSP Christine Grahame has welcomed the news that the family of Abdelbaset Al-Megrahi have lodged a fresh application to the Scottish Criminal Cases Review Commission (SCCRC) in pursuit of a further appeal against his conviction for the Lockerbie Bombing in 1988.

The disaster, which saw Pan Am Flight 103 destined for New York explode above the Scottish town on 21 December 1988, killed 270 people and is considered the most destructive act of terror in Scottish history.

Grahame, who met with the late Mr Megrahi three times whilst he was in prison in Greenock, and has long campaigned against the conviction, said:

“I am pleased that Mr Megrahi’s family has decided pursue an appeal against his conviction. I believe Mr Megrahi was wrongly convicted and that he abandoned his own appeal in desperation to return home before he died”

“I provided a statement for this application to the family’s solicitor Aamer Anwar and I sincerely hope the SCCRC remit the case to the High Court for a further appeal when all the evidence can be heard at last.

“I know how important it was for Abdelbaset Al-Megrahi to have his family’s name cleared. He told me on my final visit to him that he did not want the family name to go down in history as the Lockerbie bomber.

“It is also important for the victims’ families to learn the truth at last.”

UPDATE July 6 2018 — On May 3 2018, the SCCRC decided that it is in the interests of justice to accept the current application for a full review of his conviction.

The commission is thus examining the case to decide whether it is appropriate to refer the matter for a fresh appeal.

As I have said many times before, I regard the Lockerbie verdict against Megrahi as a “Grand Monument to Human Stupidity”.

Indeed, the written opinion of the Lockerbie judges is a remarkable document that claims an “honoured place in the history of British miscarriages of justice.”

If the Commission refers the case for a new appeal , the infamous Zeist verdict does not have a snowball’s chance in hell of surviving.

SCOTBOM: Evidence and the Lockerbie Investigation by Richard A. Marquise

Megrahi: You Are My Jury: The Lockerbie Evidence by John Ashton

One Year Ago — LOCKERBIE : SCCRC press release on Megrahi application