Two Years Ago — “Journalists for Hire : How the CIA Buys the News”

“I’ve been a journalist for about 25 years and I was educated to lie, to betray and not to tell the truth to the public. The truth will come out one day, the truth won’t die.” 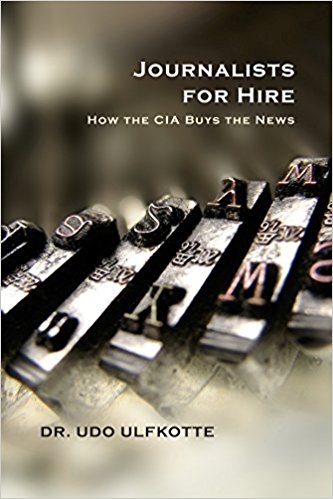 May 6 2017 –In 2014, German journalist Udo Ulfkotte, former director of Frankfurter Allgemeine Zeitung, author of the book “Gekaufte Journalisten”, (Journalists for Hire), denounced European media who write lies under pressure from the CIA. An English translation will be available on May 15 2017. Follow us on Twitter: @INTEL_TODAY

RELATED POST: Germany: Why was the BND spying on Belgian journalist Arnaud Zajtman?

UPDATE (May 6 2019) — It is rather sad that the English translation of the book has been suppressed. At the same time, it is hardly a surprise.

In a telling anecdote, Ulfkotte reveals that former CIA Director James Woolsey called him to convince him to write a disinformation story.

In a one-hour-long phone discussion — which began in Woolsey’s office, continued in his limousine and ended in his helicopter — the CIA Director wanted Ulfkotte to describe the stories of CIA spying in Germany as conspiracy theories.

Eventually, Woolsey himself had to acknowledge that the CIA was indeed spying on Germany.

However, Woolsey argued that the goal was not to steal European technology — which he described as inferior — but to expose the briberies used by European companies to beat US firms.

Despite the stupidity of the argument, Mike Pompeo — the clueless former CIA Director and current Secretary of State — repeated the lies at the 2017 Annual National Security Forum (University of Texas — October 12, 2017).

“In America, we don’t do espionage for fun, although it often does bring joy and professional satisfaction.

We don’t do it to help American businesses or to gain information about Americans.

No, in our Republic, the CIA’s espionage is aimed at the singular purpose of collecting foreign intelligence to keep America safe. Period. Full stop.”

PS: The suppression of the book was the subject of a discussion on Reddit Conspiracy under the title: “The book we’re not meant to see. How censorship works in the 2010s“. Someone also posted a Google translation of the entire book.

He was an assistant editor for a German main daily newspaper, Frankfurter Allgemeine Zeitung for several years until 2003. Ulfkotte died from a heart attack on  January 13 2017 at the age of 56.

Ulfkotte was on the staff of the Konrad Adenauer Foundation from 1999 to 2003. He won the civic prize of the Annette Barthelt Foundation in 2003.

Ulfkotte published a magazine called Whistleblower, reporting on topics not covered by the German media.

Ulfkotte became a vocal critic of Western policy. In 2014, Ulfkotte published the book Gekaufte Journalisten (“Journalists for Hire”), in which he stated that the CIA and other secret services pay money to journalists to report stories in a certain light.

According to Ulfkotte, the CIA and German intelligence (BND) bribe journalists in Germany to write pro-NATO propaganda articles, and it is well understood that people may lose their media job if they fail to comply with the pro-Western agenda.

The English translation of the book is due to be published under the title “Journalists for Hire: How the CIA Buys the News” in May 2017.

Dr Udo Ulfkotte has first hand knowledge of how the CIA and German Intelligence (BND) bribe journalists to write articles free of truth, facts, and with a decidedly pro-Western, pro-NATO bent or, in other words, propaganda.

In his bestselling book “Gekaufte Journalisten”, Dr Ulfkotte explains in great detail the workings of the US and NATO’s propaganda campaign and how a lack of compliance with it, on the part of a journalist, can cost a career.

Dr Ulfkotte also provides a wealth of names! “Journalist for Hire: How the CIA Buys the News” is the English translation of Dr Ulfkotte’s bestselling book.

UPDATE (May 6 2018) — Well, this book is not available anywhere!?! According to James Tracy, the English translation of Udo Ulfkotte’s best-selling book, Gekaufte Journalisten (Bought Journalists) appears to have been suppressed throughout North America and Europe.

“On May 15, 2017 Next Revelation Press, an imprint of US-Canadian-based publisher Tayen Lane, released the English version of Bought Journalists, under the title, Journalists for Hire: How the CIA Buys the News.

Tayen Lane has since removed any reference to the title from its website. Correspondingly Amazon.com indicates the title is “currently unavailable,” with opportunities to purchase from independent sellers offering used copies for no less than $1309.09.

The book’s subject matter and unexplained disappearance from the marketplace suggest how powerful forces are seeking to prevent its circulation.”  (…)

When a book publisher determines that it has acquired a politically volatile or otherwise “troublesome” title it may embark on a process recognized in the industry as “privishing.” “Privishing is a portmanteau meaning to privately publish, as opposed to true publishing that is open to the public,” writes investigative journalist Gerald Colby.

It is usually employed in the following context: “We privished the book so that it sank without a trace.”

The mechanism used is simple: cut off the book’s life-support system by reducing the initial print run so that the book “cannot price profitably according to any conceivable formula,” refuse to do reprints, drastically slash the book’s advertising budget, and all but cancel the promotional tour.”

Privishing often takes place without the author knowing, simply because it involves breach of contract and potential liability. Tayen Lane will likely not face any legal challenge in this instance, however. Ulfkotte died of a heart attack on January 13, 2017, at age 56.  [ Global Research ]

Journalists for Hire: How the CIA Buys the News — amazon

Journalists for Hire: How the CIA Buys the News

One Year Ago — Journalists for Hire : “How the CIA Buys the News”

Two Years Ago — “Journalists for Hire : How the CIA Buys the News”

This entry was posted in BND, CIA, Germany, Journalism and tagged "How the CIA Buys the News", CIA, Journalism, Journalists for Hire, Media, Udo Ulfkotte. Bookmark the permalink.