“Only two presidents in US history have been impeached – Andrew Johnson in 1867 and Bill Clinton in 1998, with both motions having subsequently been voted down in subsequent Senate votes. With a current Republican majority in the Senate, few political commentators expect a successful impeachment of Donald Trump at any stage.”

“But I will tell you a secret. The DGSE produced a note dated December 2015. The title of the note is: US Presidential Election : Victory of Mr Trump. What are the consequences? ”

“Prediction is very difficult, especially about the future. ” 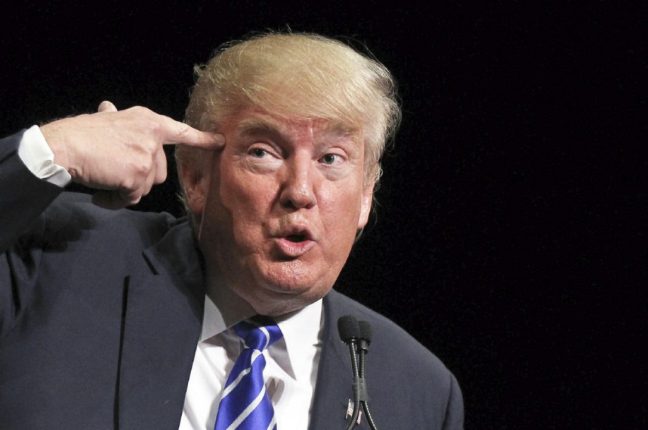 January 23 2019 — With a new Congress in office and the Mueller inquiry closing in, the talks of impeachment are in the air. Donald Trump’s days as POTUS may be numbered. Intel Today would like to know what you think? Follow us on Twitter: @Intel_Today

UPDATE (March 13 2019) — Obviously, not everyone believes that the US House of Representatives will approve — or pass — one or more articles of impeachment of President Trump.

On Monday (March 11 2019), House Speaker Nancy Pelosi stated that she is not in favor of impeaching President Donald Trump, breaking from other Democrats who are eager to exercise their constitutional power to oust the president from office.

“This is news. I’m going to give you some news right now because I haven’t said this to any press person before.”

Following the news conference, Trump’s impeachment odds quickly dropped on heavy volume. Since January 17 2019, the odds have dropped from 54 to 35 currently. 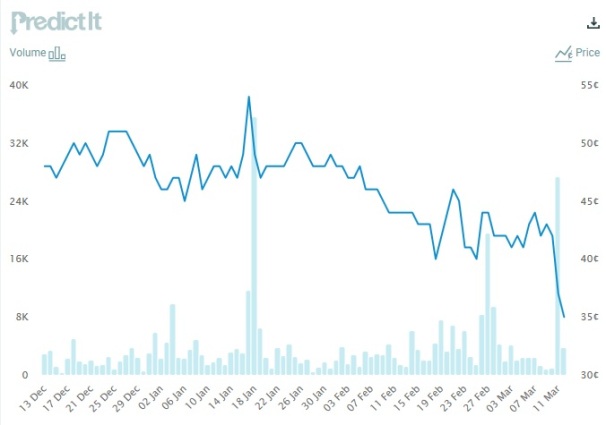 Following Buzzfeed’s publication on Thursday 17 January of an article which claimed that Donald Trump had instructed his former lawyer Michael Cohen to lie to Congress about the US president’s business ties with Russia, odds markets went into over-drive on a Trump impeachment going into the weekend.

Wisdom-of-the-Crowds platform PredictIt saw shares in the outcome being traded at 54c [corresponding to an implied probability of 54%] – a record high for the market, having climbed from 48c only a few hours earlier.

However, in an unusual step, Robert Mueller’s office swiftly issued a public statement denying Buzzfeed’s claims – the first such statement coming from Mueller as part of his ongoing investigation into alleged Russian interference in the 2016 presidential elections.

With a 30-day rolling average currently hovering at around 50c, most analysts have essentially been interpreting longer-term market sentiment as an effective coin toss on an impeachment outcome. 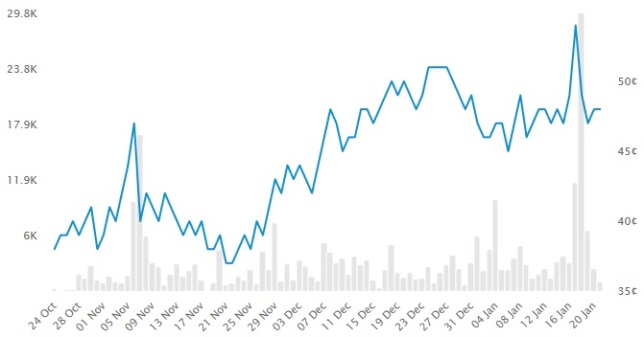 What do you think?

Do you believe that the U.S. House of Representatives will approve or pass one or more articles of impeachment of President Trump?

Please, understand that the question is not about trial or conviction by the U.S. Senate and removal from office.

The end of Trump? [The Fifth Estate]

Will Donald Trump be impeached in his first term? — Predictit

This entry was posted in Dr. Martin Luther King and tagged Impeachment, Trump. Bookmark the permalink.