“Some former officials who reviewed the evidence described the case against Mr. Lee as strong but circumstantial, not bulletproof. Some at the C.I.A. argued that officials were too quick to suspect a mole — especially a Chinese-American — when there were other explanations.”

“Mr. Lee is not a Chinese spy, he’s a loyal American who served his country in the military and in the CIA.”

On January 15 2018, Jerry Lee — a former Central Intelligence Agency officer — was arrested at JFK airport. According to the charges, Mr. Jerry Lee illegally retained highly classified information. But the FBI suspects a bigger crime. The Bureau believes that Lee betrayed the identities of several CIA assets in China. Follow us on Twitter: @Intel_Today

RELATED POST: One Year Ago — CIA’s Strategy in the Face of Emerging Challenges

Judge T. S. Ellis III set a trial date for Jerry Chun Shing Lee for February 12, 2019. Why on earth has no one reported anything about this trial? Where is Jerry Lee? What happened to him?

Interesting details about this case emerged in November 2018, when Asia Times posted a story based on a “declassified document” from the UK National Archives regarding Barry Cheung Kam-Lun.

According to Asia Times,

“Lee’s business partner Cheung, who had been a superintendent with the former Royal Hong Kong Police Force, could have been a detainee-turned-middleman for China.

A file among documents declassified by the UK National Archives, titled “Hong Kong Residents Detained in China,” (…) Cheung was intercepted in Shenzhen across the border on June 11, 1992, and transferred to a detention center in Quanzhou in the southeastern province of Fujian, when Cheung was working for the Michigan-based private security company Pinkerton.

More than two decades later, it transpired that Cheung had been acting as Beijing’s intermediary and was heavily involved in Lee’s case since the two founded a detective agency in Hong Kong in 2009, two years after Lee ended his tenure as a CIA case officer.”

So I decided to go back and read again this article, titled “Details emerge on Hong Kong biz partner of CIA mole recruited by Beijing“.

And guess what? This article is no longer online…

A bit puzzled, I thus decided to research the file “Hong Kong Residents Detained in China”.

According to the information posted on the website of the UK National Archives, this file — Hong Kong residents detained in China | The National Archives — was classified in 1992 for a period of 70 years!

So either, Asia Times made up this story or else someone gave them a copy of that file. 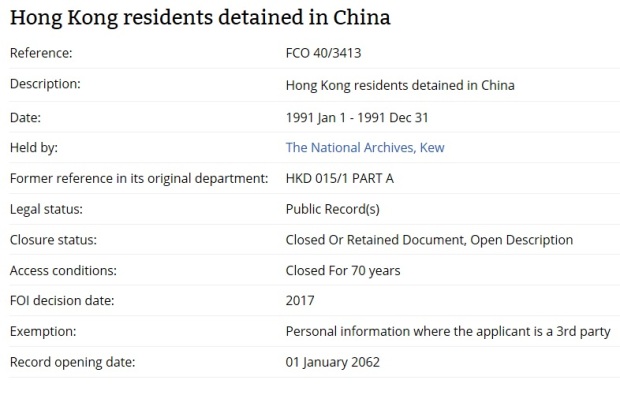 For what is worth, I would rather believe that the story is true. But, obviously, the Asia Times could not have seen it legally.

Perhaps the Asia Times got a stolen/leaked copy believing it to be legally released, and later realised that they could be in trouble for using leaked classified material, and so took the article down.

In reality, the Asia Times has no reason to fear the UK authorities.

PS — When I suggested — long before it was known — that there was a link between the John Reidy’s complaint to the CIA’s internal watchdog and the CIA debacles in both Iran and China, very few people believed it.

On November 2 2018, Zach Dorfman and Jenna McLaughlin reported that this was indeed the case.

Their investigation, published by Yahoo News, was based on conversations with eleven former U.S. intelligence and government officials directly familiar with the case.

According to these current and former  intelligence officials, the CIA did indeed botch the communication system it used to interact with its sources.

This new information makes the case against Lee much weaker, but certainly no less mysterious… Stay tuned!

How the CIA’s spy network in China collapsed — AXIOS