“President Donald Trump’s statements on Russia have been very bizarre and it suggests that he doesn’t have a good understanding of what Putin has done over a very long period of time.” 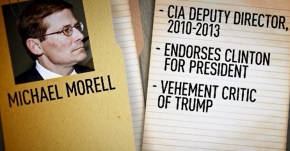 February 7 2017 — Former Acting CIA Director Michael Morell has suggested that Trump’s affection for Putin may be to blame on Russia having compromising material on Trump. Follow us on Twitter: @Intel_Today

In a revealing self-critical interview, Morell finally acknowledged in December 2017 that he — as well a several other former CIA directors all highly critical of the US president — had failed to fully “think through the negative backlash generated by their going political”.

“In August of 2016, I became political, when I endorsed Hillary Clinton with an op-ed in The New York Times. (…)

I was concerned about what is the impact it would have on the agency. (…)  But I don’t think I fully thought through the implications.”

During an interview with FOX’s Bill O’Reilly, President Trump explained that a strong relationship with Russia is necessary to defeat the Islamic State.

After O’Reilly accused Putin of being “a killer”, Trump took Putin’s defense and said: “You got a lot of killers.What, you think our country’s so innocent?”

Mr. O’Reilly: “Do you respect Putin?”

Mr. Trump: “Well, I respect a lot of people, but that doesn’t mean I’m going to get along with them. He’s a leader of his country. I say it’s better to get along with Russia than not. And if Russia helps us in the fight against ISIS — which is a major fight — and Islamic terrorism all over the world — major fight — that’s a good thing. Will I get along with him? I have no idea. It’s very possible that I won’t.”

Mr. Trump: “There are a lot of killers. You think our country’s so innocent?”

The Kremlin Is Not Amused

According to the state-run news agencies RIA Novosti and Interfax, Dmitri S. Peskov — the Kremlin’s spokesman — said that the description was “unacceptable, insulting.”

“We consider such words from a Fox News correspondent to be unacceptable, insulting.

Of course, we would prefer to receive apologies to our president from such a respectable television network.”

While discussing this interview with CBS, Former acting CIA Director Michael Morell suggested that there may be some sinister reasons to explain the bromance between Trump and Putin.

“Trump’s affection for Putin may come from goodwill accrued by Putin by complementing Trump during the campaign.

However, more sinister reasons, such as financial ties or Russia having compromising material on Trump, may be to blame.

I think he has some special affection for Putin that is the result of something we don’t fully understand.

There is some special bond here that seems to be overriding the facts and the interests of the United States of America.”

One Year Ago — Former acting CIA Director Mike Morell: “Trump has ‘some special bond’ with Putin.”