“Didi Rapp brings broad, deep expertise from across the Agency and the Intelligence Community to her new role as the head of our Directorate of Analysis. With her engaging leadership style and reputation for objectivity, Didi will excel in leading our talented analytic cadre.”

“Given the network performance issues on March 27-28, 2012, the only message to reach Mr. Sanger from the CIA press officer [Cynthia “Didi” Rapp] in this particular exchange was a standard auto-message generated by a network device.”

“Sanger’s book acknowledges that he withheld information at the request of government officials. The extent of Sanger’s collaboration with [Acting CIA Director Mike]  Morell and the fact that the men apparently discussed sensitive information is noteworthy in light of the Obama administration’s unprecedented campaign against government leakers.” 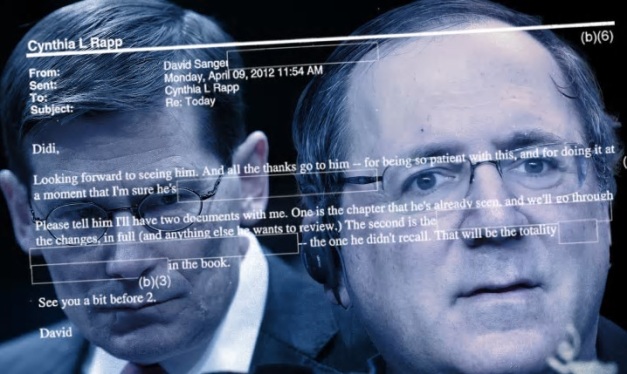 January 19 2019 — CIA Director Gina Haspel has appointed another woman to the top-level of the agency, naming Cynthia “Didi” Rapp as Deputy Director for analysis, essentially the top analyst in the CIA. Good news! Some folks have finally figured out to whom the 1982 Intelligence Identities Protection Act actually applies. Follow us on Twitter: @INTEL_TODAY

The appointment Cynthia “Didi” Rapp means that the top three directorates of the Agency —  Operations, Analysis and Science & Technology — are now all headed by women.

The CIA has traditionally been divided into four Directorates. A fifth Directorate was added in October 2015.

Directorate of Operations (DO)

Directorate of Science and Technology (DS&T)

The first two Directorates collect intelligence. The third analyzes the intelligence and writes finished papers about it.

The Directorate of Digital Innovation (DDI) is the Agency’s newest Directorate focused on accelerating innovation across the Agency’s mission activities with cutting-edge digital and cyber tradecraft and IT infrastructure. [CIA Website]

Dawn Meyerriecks joined the CIA in 2013 as Deputy Director of the Directorate of Science and Technology.

In December 2018, the CIA tapped Beth Kimber to lead its Directorate of Operations, making her “the first woman” (according to MSM) to lead the agency’s clandestine arm in its 70-year history.

“With nearly 34 years of experience and a proven ability to deliver with impact on CIA’s operational mission, Beth Kimber will be an exceptional leader of our Directorate of Operations,” Brittany Bramell, the CIA’s director of public affairs, told CNN in a statement

Most recently, Haspel appointed Cynthia “Didi” Rapp as deputy director for analysis, the top analyst position in the CIA.

“Didi Rapp brings broad, deep expertise from across the Agency and the Intelligence Community to her new role as the head of our Directorate of Analysis,” Brittany Bramell, CIA director of public affairs, said in a statement.

“With her engaging leadership style and reputation for objectivity, Didi will excel in leading our talented analytic cadre.”

Haspel also named Sonya Holt, who also has over three decades of experience, as chief diversity and inclusion officer. She also named Courtney Simmons Elwood as the agency’s general counsel. Brittany Bramell is the current CIA’s director of public affairs.

Who is Didi Rapp?

Cynthia “Didi” Rapp, a Middle East expert, had been the agency’s director of public affairs under Director David Petraeus and deputy executive director under Gina Haspel.

She had also overseen production of the President’s Daily Briefing while at the Office of the Director of National Intelligence.

Rapp’s husband, father and mother all worked at the CIA.

According to documents obtained by Gizmodo, New York Times reporter David Sanger worked extensively with former deputy CIA director Michael Morell during the reporting of his book Confront and Conceal: Obama’s Secret Wars and Surprising Use of American Power—even arranging to provide Morell with access to an entire unpublished chapter for his review.

The emails, which were obtained under the Freedom of Information Act, are redacted in a manner suggesting that Morell and Sanger discussed sensitive national security information, and show that on at least one occasion, Cynthia “Didi” Rapp — then the CIA public affairs officer — sent Sanger an encrypted message via email.

“The emails released by the CIA reproduce Sanger’s correspondence with the agency’s press officer, Cynthia “Didi” Rapp, who acted as an intermediary when the two men weren’t in the same room.”

These emails suggest that Morell and Sanger discussed information that the U.S. government considers unfit for publication.

The strongest indication that Morell and Sanger were discussing topics that the U.S. government was interested in protecting from prying eyes is the fact that Rapp attempted to encrypt at least one message to Sanger.

The CIA already operates a secure, and entirely separate, system for transmitting classified information to cleared personnel, so it’s not immediately obvious why the agency would use Cisco’s service in a message to a third-party—especially a reporter.

Former CIA employee Jeffrey Alexander Sterling was arrested, charged, and convicted of violating the Espionage Act for revealing details about Operation Merlin (covert operation to supply Iran with flawed nuclear warhead blueprints) to journalist James Risen who was threatened to be jailed for not revealing his sources.

There can be little doubt that David Sanger received classified information from Mike Morell and Cynthia “Didi” Rapp.

Why have none of them been investigated like Jeffrey Sterling and James Risen?

Obviously, the US DOJ  is holding different people accountable according to different standards.