“I also received information regarding an unauthenticated claim made by a Belgian pilot, “Beukels”, to Claude de Kemoularia in 1967 that Beukels shot down or otherwise forced SE-BDY to crash. In the course of my work, I was for the first time given access to the originals of De Kemoularia’s agendas, as well as many of his personal records, which appear to verify his meeting with “Beukels” and other mercenaries in 1967. I also reviewed De Kemoularia’s letters showing that he had gone to the French and Swedish authorities regarding Beukels’s claim much earlier than previously understood. However, without further information, I was not able to verify other aspects of the claim, including, most notably, the identity of Beukels.”

November 2 2017 — A very credible source told INTEL TODAY that Jan Van Risseghem was the Belgian mercenary responsible for the death of Dag Hammarskjold. Perhaps, more people will come forward and speak out. Follow us on Twitter: @INTEL_TODAY

RELATED POST: One Year Ago — United Nations to probe whether SEC-GEN Hammarskjold was assassinated

UPDATE (January 12 2019) — Today, The Guardian confirms that Belgian mercenary Jan van Risseghem is indeed the person responsible for the death of Dag Hammarskjold and his crew.

A friend has also come forward to claim that, less than a decade after Hammarskjöld’s death, Van Risseghem told him he had attacked the plane. Pierre Coppens met Van Risseghem in 1965, when he was flying for a parachute training centre in Belgium.

Over several conversations, he claimed, the pilot detailed how he overcame various technical challenges to down the plane, unaware of who was travelling inside.

All the details ‘exclusively revealed by The Guardian’ were previously explained in this post published more than a year ago… Even the pic of Jan van Risseghem was initially published on this blog.

I will try to update this story next week. For now, I just want to make one point very clear.

Journalists are still missing the importance of one critical aspect of this story: the role of CRYPTO AG. — END of UPDATE

On this day — one year ago — I wrote my first post on the ‘mysterious’ death of Dag Hammarskjold and his party. I think that there is hope that the truth will come out in this case.

First, the hypothesis of an assassination can no longer be dismissed as a “Conspiracy Theory”.

Second, some folks — former friends and/or mercenaries in Katanga at the time of the event — may be willing to talk. Let us hope that they will come forward, for the sake of history at least.

A new United Nations-mandated report has found it “plausible” that an external attack or threat may have led to the fatal plane crash that killed former UN Secretary-General Dag Hammarskjöld.

“There is a significant amount of evidence from eyewitnesses that they observed more than one aircraft in the air, that the other aircraft may have been a jet, that SE-BDY was on fire before it crashed, and/or that SE-BDY was fired upon or otherwise actively engaged by another aircraft. In its totality, this evidence is not easily dismissed.”

Possible external attack or threat, including capacity of the armed forces of Katanga — § 9 & 10 from the UN Report

“§9. The hypothesis of an external attack or threat has included a theory that the plane may have been attacked, menaced or distracted by a Fouga Magister jet operated by Katangan forces. In considering the capacity of such forces, the inquiries of 1961/62 appeared to understand that Katanga had only one operable Fouga at the relevant time, with only one pilot able to fly it. New information contradicts that understanding. Regarding the presence of Fouga jets, the Independent Panel considered a claim made by David Doyle, confirmed by the United States as a former Central Intelligence Agency (CIA) officer, that three Fouga aircraft were supplied by “the French” with “CIA assistance” in 1961. While the United States advised in 2015 that it had no knowledge of the delivery of Fouga jets to Katanga, in 2017 the United States and other sources provided information appearing to substantiate that on or about 16 February 1961, three Fouga jets that had been purchased from France were delivered to Katanga by a United States commercial carrier, against objections of the Government of the United States. I have assessed the probative value of this new information as being strong.”

“§10. In addition, new information received from the United States and the United Nations suggests that at least two Fouga jets may have been operable around Katanga on the night of 17 to 18 September 1961. This is a matter which, further to the ascertainment of more facts, remains to be finally determined. I also received information from the United States suggesting that a Fouga may have been used at the relevant time in air-to-air attacks, including against United States aircraft in Katanga, which would no doubt have been a matter of interest to United States defence agencies. Other information received refers to Fouga jets having flown at night or from unpaved airfields in Katanga, both of which suggest that the pilots there were able to utilize the jet outside of its ordinary capabilities.”

Some of the most compelling testimony of foul play comes from Charles Southall, who in 1961 was an intelligence officer stationed at the U.S. National Security Agency’s naval communications base in Cyprus.

He said he heard a pilot shoot down Hammarskjöld’s plane and that the CIA and/or the NSA have a recording of it.

“The watch supervisor called me and said, ‘Come [to work] about midnight, something interesting is going to happen.”

That’s when he said he heard a recording of the crash that somebody told him was seven minutes old, which, according to Southall, “meant that somebody down there in the Ndola area, also waiting for this to happen, made a recording of it, put a date-time stamp on it and… sent it off.”

In his statement to the Commission of Inquiry, Southall recalled the pilot saying:

“I see a transport plane coming low. All the lights are on. I’m going down to make a run on it. Yes, it’s the Transair DC6. It’s the plane.”

Then, the sound of cannon fire, at which point the voice, which he described as cool and professional, became animated: “I’ve hit it. There are flames. It’s going down. It’s crashing.”

Southall believes the voice he heard was that of a Belgian mercenary pilot nicknamed “The Lone Ranger.”

Hours before the wreckage was officially located, the U.S. Ambassador in the Congo, Edmund Gullion, sent a cable to Washington speculating that the secretary general’s plane might have been attacked by a known Belgian mercenary.

“There is possibility he was shot down by the single pilot who has harassed UN operations,” Gullion wrote.

The document, which was released by the State Department following a Freedom of Information Act (FOIA) request on behalf of the Hammarskjöld Commission, identified the pilot as Vak Riesseghel, likely a misspelling of Katanga Air Force Commander Jan Van Risseghem.

A UN Military report stated that Van Risseghem, a former South African and Royal Rhodesian AF pilot, had been arrested and repatriated to Brussels 10 days before the crash, but had managed to return to Katanga.

“As long as he is still operating, he [Van Risseghem] may paralyze the air rescue operations,” wrote Gullion in the 1961 cable.

In his cable, sent at 11am on 18 September 1961, Gullion correctly identifies the Ndola area as the crash site. He also names the suspected Belgian pilot as “Vak Riesseghel”, almost certainly a mis-spelling of Jan van Risseghem, who had served in the South African and Rhodesian air forces, and commanded the small Katanga air force.

In another cable sent two days before the crash, Gullion passed on a commercial pilot’s report that the Belgian mercenary, flying a Katangese jet, “flew wing to wing” with him – a highly dangerous manoeuvre.Gullion’s two telegrams call into question Van Risseghem’s insistence that he had not been in Katanga in September 1961. Van Risseghem was never questioned by any of the official inquiries.”

The telegram reveals that on the morning after the crash, the Ambassador thought it credible that the plane had been shot down by a mercenary pilot – so credible, in fact, as to justify asking US diplomats in Brussels and Salisbury [now Harare] to put pressure on the Belgian and Rhodesian governments to ground the pilot,” said Dr Williams, a senior researcher at the University of London’s Institute of Commonwealth Studies. 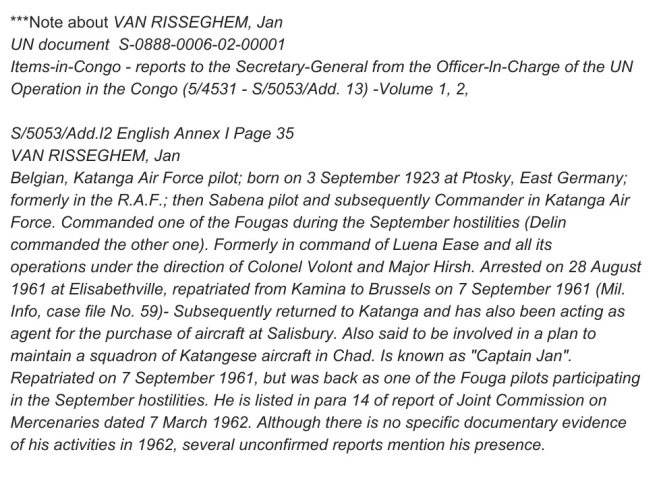 In her book, Susan Williams provides the account of an American naval pilot, Commander Charles Southall, who was working at the NSA listening station in Cyprus in 1961. Shortly after midnight on the night of the crash, Southall and other officers heard an intercept of a pilot’s commentary in the air over Ndola – 3,000 miles away.

Commander Southall recalled the pilot saying: “I see a transport plane coming low. All the lights are on. I’m going down to make a run on it. Yes, it is the Transair DC-6. It’s the plane,” adding that his voice was “cool and professional”. Then he heard the sound of gunfire and the pilot exclaiming: “I’ve hit it. There are flames! It’s going down. It’s crashing!”
Williams said: “We need to know if the US state department holds the raw intelligence that led Gullion to think [the plane could have been shot down] and if there is other intelligence, notably in the form of intercepts, that is held by the NSA in relation to Dag Hammarskjöld‘s flight on the night of 17-18 September 1961.

In April 2014, following the declassification of a secret telegram sent to Washington in 1961 by the US Ambassador to the Congo, Jan van Risseghem was identified as the pilot of a Katangese jet which allegedly shot down the Douglas DC-6 aircraft carrying United Nations Secretary-General Dag Hammarskjöld on 18 September 1961.

On 4 April 2014, Julian Borger, diplomatic editor of The Guardian, reported that a newly declassified 1961 cable called for the grounding of a Belgian mercenary (Jan van Risseghem) hours after the UN Secretary-General’s aircraft crashed in Africa:
Hours after a plane carrying the UN Secretary-General, Dag Hammarskjöld, crashed over central Africa in September 1961, the US Ambassador to Congo sent a cable to Washington claiming that the aircraft could have been shot down by a Belgian mercenary pilot.In the newly declassified document, the Ambassador, Ed Gullion, does not directly implicate the Belgian or Rhodesian governments in what he calls “this operation”, but calls for US pressure on them to ground the mercenary, adding it was “obviously a matter of highest importance”. He said the pilot had been hampering UN operations and warned that if not stopped “he may paralyse air-rescue operations”.

The document was released after an international panel of retired judges called last year for a fresh inquiry into the Hammarskjöld crash, saying that new evidence “undoubtedly” existed. The UN Secretary-General, Ban Ki-moon, decided in February to put the panel’s findings on the agenda of the UN General Assembly.The Gullion cable was not seen by previous official inquiries. A commission formed by the Rhodesian colonial authorities blamed the crash on pilot error, while a later UN investigation recorded an open verdict.

Jan van Risseghem was born on 3 September 1923 in Plötzky-Bergfeld (Germany) and died on 29 January 2007 in the municipality of Lint in Antwerp, Belgium.

Jan van Risseghem trained as a pilot in the Belgian Air Force, and later served with both the South African Air Force and the Rhodesian Air Force (RhAF).

By the early 1960s, Jan van Risseghem had become the mercenary commander of a small air force in the breakaway province of Katanga in the former Belgian Congo.

Pierre C. is a former Belgian Navy Captain and he was a good friend of Jan Van Risseghem.  I want to thank him for the pictures he sent me.

I understand that Van Risseghem told Pierre C. that he was the ‘lone ranger’ who shot down Hammarskjold’s plane.

And a direct witness who fought with Van Risseghem in Katanga — and now lives in Hong Kong — may have more details. I hope these gentlemen will come forward.

Dag Hammarskjöld’s plane may have been shot down, ambassador warned — Guardian