“It clearly shows that most of the increase in GBM [glioblastoma multiforme] occurred in just two regions of the brain, the temporal and frontal lobes. There’s no reason to believe that better diagnosis would favor one part of the brain over another. I’m not saying it’s necessarily mobile phones, but surely that’s the most obvious possibility. After all, the temporal and frontal lobes are exposed to the most radiation when a phone is held up to the ear. I can’t think of anything else to account for what we are seeing. What else is there?”

“William Broad, a veteran science reporter, would have us believe that he tailored his write-up to tell people what they want to know. But the NTP story was not that the rats got brain cancer or even that they got malignant tumors in their hearts. The key finding was that they got cancer. A responsible headline would have read, Cell Phone Radiation Causes Cancer.”

“We don’t smoke that shit. We just sell it. We reserve the right to smoke for the young, the poor, the black and stupid.”

R.J. Reynolds executive’s reply when asked why he didn’t smoke according to Dave Goerlitz, lead Winston model for seven years for R.J. Reynolds. [1]

November 11 2018 — Some American diplomats — and their doctors  —  have growing concerns that the U.S. government is trying to downplay whatever happened to them. I am afraid they are entirely correct. Actually, I predicted this cover-up more than a year ago! Follow us on Twitter: @INTEL_TODAY

RELATED POST: Microwave Attacks — Havana, Beijing… And Where Else?

UPDATE (November 21 2018) — Laura Hughes, an US Air Force veteran and mother of a U.S. diplomat who fell ill after suspected “health attacks” in China , says her daughter Catherine Werner is struggling with the effects of traumatic brain injury after experiencing strange sounds and sensations at her apartment in Guangzhou.

Hughes is calling on the State Department to do more to solve the mystery that has eluded investigators since U.S. diplomats and spies starting getting sick in Cuba in late 2016.

“I do not believe that our military, our diplomats around the world or here at home are safe,” Hughes says in an interview with NBC News Chief Foreign Affairs Correspondent Andrea Mitchell. “Because this weapon system is creating havoc.”

Meanwhile, there is some news regarding The New York Times piece written by William Broad to dismiss the NPT $30 million project as a waste of time and money.

I already pointed out that even the headline —Study of Cellphone Risks Finds ‘Some Evidence’ of Link to Cancer, at Least in Male Rats — was misleading.

In their last post ( Defending the Indefensible — Deconstructing a “New York Times” Headline), Microwave News reports that Theodora Scarato, the executive director of the Environmental Health Trust (EHT), wrote a series of emails to William Broad and kept writing until he replied. Among her many questions was: Why did the headline refer to “some” rather than “clear” evidence of cancer?

In his reply, Broad maintained that he saw nothing wrong with the headline. Here’s what he told her:

“The vital context for this discussion is that our article focused on brain tumors because that’s what readers worry about. Naturally, people hold cell phones to their heads, not to their hearts (unlike the rats in the study, which had no choice but to be irradiated over their entire bodies). I see nothing here to correct. We detailed the various findings of the study exactly as you report them: ‘some evidence’ of brain cancer versus ‘clear evidence’ of heart cancer. Again, we gave priority in the article to the brain-tumor issue because that has become a major topic of concern to consumers.”

Broad, a veteran science reporter, would have us believe that he tailored his write-up to tell people what they want to know. But the NTP story was not that the rats got brain cancer or even that they got malignant tumors in their hearts. The key finding was that they got cancer. A responsible headline would have read, Cell Phone Radiation Causes Cancer. [Microwave News]

As soon as the US media reported the mysterious illness affecting the US diplomats, I suggested than a microwave weapon — and not sonic attacks — may be the cause of the “Havana syndrome”.

To the best of my knowledge, I may have been the first person to suggest that the noise “heard” by the victims could have been in fact an illusion caused by the exposure of the acoustic nerve to microwave — GSM like — radiations.

“Quick Analysis — If the facts are confirmed and if the effects are indeed caused by a physical device, I find the microwave explanation far more likely than a sonic attack; for many reasons.

If this is indeed the case, I expect to hear nothing further in the future because the truth would sent a wave of panic in the Telecom sector.”

On September 1 2018, the NYT published a long article titled:  “Microwave Weapons Are Prime Suspect in Ills of U.S. Embassy Workers.

Obviously, there is a good chance that I was right about the microwave attacks. I am afraid that my second prediction may also be correct. Has the official cover-up begun? I think so.

A cover-up is an attempt, whether successful or not, to conceal evidence of wrongdoing, error, incompetence or other embarrassing information. In a passive cover-up, information is simply not provided. In an active cover-up, deception is used. In this case, we can already detect both passive and active cover-up.

Since the NYT article publication, nothing has been heard from any of the US agencies investigating the case. Why not?

Moreover, two recent events demonstrate that there is an ongoing effort to ‘snowjob’ this scandal.

The methods in actual cover-ups are well-known and tend to follow a general order. The tobacco industry cover-up of the health hazards related to smoking is a textbook example which is, in my opinion, highly relevant to this affair.

The press coverage of the final National Toxicology Program report regarding the link between cell phone and cancer has always been lousy. But this week, it became surreal.

Most of the major media — The Washington Post, The Wall Street Journal, Los Angeles Times, ABC News, CBS News, Bloomberg, Associated Press and Science — were all absent when the NPT announced on October 31 that they believe the cancer link is very real.

There was one exception among major media outlets: The New York Times. In a piece that would make Goebbels proud, William Broad dismisses the NPT $30 million project as a waste of time and money.

I promise you a serious analysis of this piece. For now, let me point out that even the headline —Study of Cellphone Risks Finds ‘Some Evidence’ of Link to Cancer, at Least in Male Rats — is misleading.

The NPT did not find “some evidence” linking cellphone to cancer. The NPT has found and reported “clear evidence.”

Even the sub-title — “Many caveats apply, and the results involve radio frequencies long out of routine use.” — is factually incorrect. The NPT experiment tested both the 2G and 3G modulations and both technologies are still widely used. In Brussels, the power of these bands exceeds the 4G.

On November 9, Tim Golden and Sebastian Rotella published a piece in ProPublica titled: “The Strange Case of American Diplomats in Cuba: As the Mystery Deepens, So Do Divisions in Washington“.

Basically, the authors argue that the whole thing is simply nonsense and the diplomats just made it up! Two paragraphs summarize the piece quite well.

“Earlier this year, officials said, some scientists made a case for microwave radiation as a possible explanation. Russia had experimented with the technology for decades, going back to the Soviets’ use of microwave energy to conduct surveillance on the U.S. Embassy in Moscow starting in the 1950s. It is also known to be capable of producing the sensation of sound as part of what is called the Frey effect.

But other scientists are highly skeptical of the microwave hypothesis. In part, this is because many consider the dangers of low-level, regular microwave exposure from sources like communications towers to be unproven. Officials said the microwave theory has also been discounted by experts who believe microwaves intense enough to damage the brain would have to burn other tissues.”

Allow me to repeat the obvious. Microwave weapons and microwave spying is not an old Russian thing. Spy agencies around the world, including the NSA and the CIA, use it to gather information on their opponents (and allies).

INTEL TODAY was even able to determine the frequencies used by the NSA with the help from some documents leaked by Ed Snowden.

And it simply does not matter if many ‘experts’ — all of them on the payroll of the Telecom Industry — consider the dangers of low-level, regular microwave exposure from sources like communications towers to be unproven.

The recent NPT report demonstrates the link very clearly. And the occurrence of glioblastoma — the most aggressive type of brain tumor —  in the frontal and temporal parts of the human brain is quickly rising as a U.K. epidemiology study has recently confirmed. 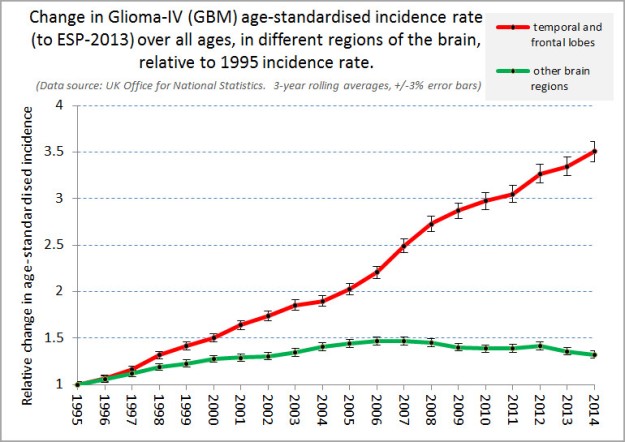 Havana Syndrome — The Cover-Up Has Begun