“Maybe you’re mistaken–maybe this first part of the Kryptos code is really not a polyalphabetic Vigenere Tableau after all–maybe it’s a different type of code entirely. Or maybe it is a Vigenere code, but it’s been double or triple encoded–or maybe it was encoded backwards or maybe ….” 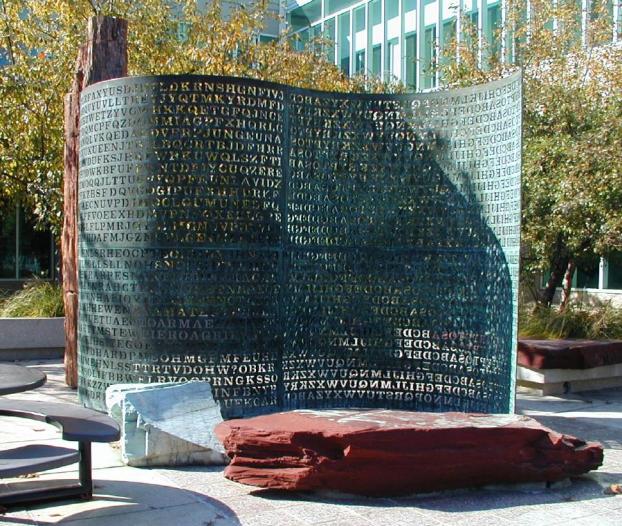 November 3 2018 — Kryptos is a sculpture by the American artist Jim Sanborn located on the grounds of the Central Intelligence Agency (CIA) in Langley, Virginia. Of the four parts of the message, the first three have been solved. The last part of the message remains as one of the most famous unsolved code in the world. Follow us on Twitter: @INTEL_TODAY

RELATED POST: The KRYPTOS Code — How to Break a Vigenère Code

RELATED POST: The KRYPTOS Code — The Solution of Section II

RELATED POST : The KRYPTOS Sculpture — History of the NSA Involvement

RELATED POST: The KRYPTOS Sculpture — SECTION I : A KEYED Vigenère Cipher [And why the CIA lies so much about it?] — UPDATE

Since its dedication on November 3, 1990, there has been much speculation about the meaning of the four encrypted messages it bears.

The sculpture continues to be of interest to crypto-analysts, both amateur and professional, who are attempting to decipher the fourth passage. The artist has so far given two clues to this passage.

In a piece published in CIA Studies in Intelligence, David Stein concluded:

“I hope I have inspired some people to study the Kryptos puzzle and to give it a try.

Even the parts of the code that already have been decrypted still have to be interpreted for their deeper meaning.

There are many pieces to be put together and many layers to be peeled away.”

I will regularly expand and update this post to explain how various parts of this code were encrypted, who decoded them and how.

I will also keep you informed on the progress made in decoding the last part of this enigma. Stay tuned!

Kryptos remains one of the most famous unsolved codes in the world today.

Since the encrypted sculpture was placed on display by American artist Jim Sanborn on the grounds of the Central Intelligence Agency (CIA) in Langley, Virginia, in 1989, there has been much speculation about the meaning of the encrypted messages it bears.

Of the four messages, three have been solved, with the fourth remaining a mystery. Over the years, hints and slight cracks have appeared in the armour of this puzzle, however its continuity of being one of the greatest enigmas of all time continues to provide a diversion for cryptanalysts, both amateur and professional, who are attempting to decrypt the final section.

Even after solving the final section, the final riddle of this enigma within an enigma must be worked out, which from the solutions so far seem to be connected with (1) Illusion in Darkness, (2) Using the Earth’s magnetic field being transmitted to something buried underground and (3) Ancient Egyptian tombs, with the clue (4) still waiting to be solved after more than 2 decades.