“A poet closer to death than to philosophy, closer to pain than to insight, closer to blood than to ink. A poet filled with mysterious voices that fortunately he himself does not know how to decipher.”

“And you’ll ask: why doesn’t his poetry
speak of dreams and leaves
and the great volcanoes of his native land?
Come and see the blood in the streets.” 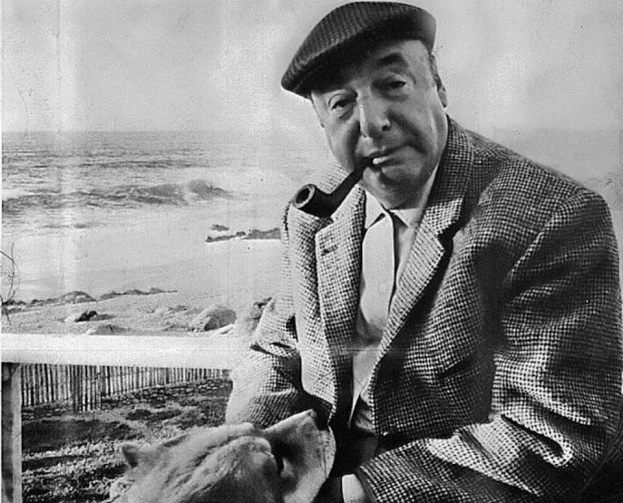 Ricardo Eliécer Neftalí Reyes Basoalto (12 July 1904 – 23 September 1973), better known by his pen name and, later, legal name Pablo Neruda was a Chilean poet-diplomat and politician. On October 21 2018, The SpyMuseum tweeted: “Today in #SpyHistory – The Nobel Prize for Literature was awarded to former KGB agent and Chilean poet, Pablo Neruda, 1971.” Really? Where is the evidence that Neruda was a KGB agent? Follow us on Twitter: @INTEL_TODAY

Allow me to begin with my own understanding of this affair. There is ZERO evidence that Pablo Neruda was a KGB agent. Please, feel free to prove me wrong!

“You’re on safe ground.  He (Pablo Neruda) may have been classified in Moscow as a ‘trusted contact’ — a leftist who, all on his own, more or less hewed to Moscow’s line. But that doesn’t make him an agent,” Baer wrote to Intel Today.

By the way… The movie Syriana (2005) is adapted from Robert Baer‘s memoir See No Evil. The role of Bob Barnes (Bob Baer) is played by George Clooney, as Harrison Ford turned down the role, regretting it later, stating, “I didn’t feel strongly enough about the truth of the material and I think I made a mistake.”

As I was quite disturbed by the allegation, I asked a former CIA officer what he thought about this story.

“I long heard this rumor when I was at the CIA, although I was never aware of any real evidence.

But the old timers all said that Neruda was working for the KGB.

With that said, they used to accuse every prominent communist, especially in the arts, of being a KGB agent.

They did the same thing with Pablo Raptis in Greece.”

Neruda was hospitalised with cancer at the time of the coup d’état led by Augusto Pinochet that overthrew Allende’s government on September 11 1973. The Coup was backed by the CIA under orders from Nixon and Kissinger.

As General Colin Powell (US Secretary of State – 2003) once commented: “This is not a part of American history that we are proud of.”

Neruda suspected a doctor of injecting him with an unknown substance for the purpose of murdering him on Pinochet’s orders. He died in his house in Isla Negra on September 23 1973, just hours after leaving the hospital.

Although it was long reported that he died of heart failure, the Interior Ministry of the Chilean government issued a statement in 2015 acknowledging a Ministry document indicating the government’s official position that “it was clearly possible and highly likely” that Neruda was killed as a result of “the intervention of third parties”.

As far as I know, there is not a shred of evidence that Pablo Neruda was a KGB agent.

For sure the CIA was watching him closely. If you search the CIA Library, you will find easily 845 documents related to ‘Pablo Neruda’. (Here is a typical document) As far as I can tell, not one of these documents alleges that he was a KGB agent.

The issue was also debated on Wikipedia. You will notice that the ‘Pablo Neruda’ Wikipedia page does not mention the word ‘KGB’ once. That is because, people came to the conclusion that there was simply no evidence Neruda ever worked as a KGB agent.

To the best of my knowledge, there was a 1944 document stating that the KGB (NKVD)would like to recruit Neruda as an agent. So at the very least, we know that he was NOT an agent by that time!

Whether they love him or dislike him, most literary authorities consider that Pablo Neruda was one of the greatest poets of the 20th century, possibly the greatest.

It is very likely that Neruda was cowardly murdered by the Chilean Junta of Pinochet, put in power in a CIA backed Coup.

To the best of my knowledge, there is no evidence whatsoever that Neruda was a KGB agent.

“Pablo Neruda: A Passion for Life” by Adam Feinstein

In his biography of Neruda, Feinstein writes (p155): 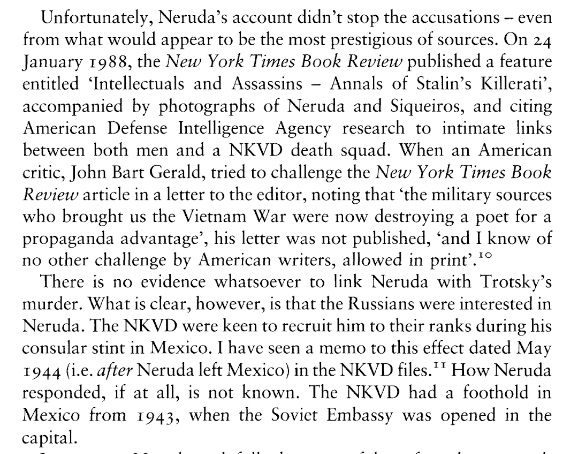 Published on Oct 23, 2017 — International forensics experts have concluded that Pablo Neruda didn’t die of cancer, as currently stated on his death certificate. The Chilean poet and senator from the Communist party died in 1973, just two weeks after the military coup led by Augusto Pinochet toppled the leftist government of Salvador Allende. The experts’ conclusion increases speculation that Neruda may in fact have been murdered. Our correspondents report from Chile.

Published on Nov 7, 2017  – Acclaimed novelist Isabel Allende, an award-winning author who has written 23 books, including “The House of the Spirits,” “Paula” and “Daughter of Fortune.” Her latest novel, “In the Midst of Winter,” is a love story that explores the plight of immigrants and refugees. Her books have been translated into 35 languages, sold over 57 million copies around the world. Her father’s first cousin was Salvador Allende, Chile’s president from 1970 until September 11, 1973, when Augusto Pinochet seized power in a CIA-backed military coup. Salvador Allende died in the palace that day. Isabel Allende would later flee from her native Chile to Venezuela.