CIA Warned South Africa About the Guptas in 2009. [Flashback : Uranium Sales During Apartheid]

“The Americans wanted to know why the Guptas are interested in mining uranium and where they intend sending their product.  Naturally we were interested as well.”

“Mrs Thatcher was relentlessly hostile to all those who sought to overthrow the apartheid regime by force or undermine it through economic sanctions. The ANC was unacceptable not only because of its association with communism… but above all because of its refusal to renounce the use of violence… which inevitably meant that she regarded it as a terrorist organisation of the same stamp as the PLO or the IRA. Mrs Thatcher adamantly opposed the imposition of further economic sanctions… South Africa’s role as a bulwark of the West against Soviet expansion was not just a rhetorical ploy but was believed implicitly by Ronald Reagan as well as by Mrs Thatcher.” 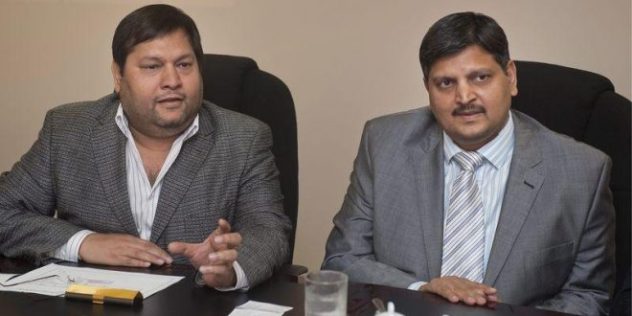 According to MSM, the Central Intelligence Agency (CIA) flagged the Guptas’ dubious activities as far back as 2009, resulting in an investigation by South African intelligence agencies that concluded that the family was a threat to national security. Seriously? Did the CIA and  European Intel agencies really care about SA illegal uranium transactions during the Apartheid? Follow us on Twitter: @INTEL_TODAY

Speaking to the Sunday Times, former spy boss Gibson Njenje said that he was alarmed to learn about the scale of the Guptas’ involvement in former president Jacob Zuma’s first cabinet reshuffle in October 2010.

Njenje was later forced out of the public service in 2011 by then security minister Siyabonga Cwele, who called the Gupta probe ‘irregular’.

Njenje, who headed up the National Intelligence Agency, told the Sunday Times he received a request from the CIA in 2009 wanting to know about the Guptas’ interest in uranium mining – as enriched uranium is used for both nuclear power generation and military nuclear weapons.

“The Americans wanted to know why the Guptas are interested in mining uranium and where they intend sending their product. Naturally we were interested as well,” said Njenje.

He added that their subsequent investigations made it clear what the Guptas were doing.

The EU3 nations — as they were known back then — demonstrated that when their civilian nuclear interests are involved, nothing is off-limits, not even their sacred human rights.

On December 13 1974, the General Assembly adopted Resolution 3295. Here is a summary of this rather unambiguous text:

“The General Assembly…strongly deploring South Africa’s continued refusal to comply with the resolutions and decisions of the U.N., its continued illegal occupation of Namibia, its brutal repression of Namibian people and its persistent violation of their human rights, as well as its efforts to destroy the national unity and territorial integrity of Namibia…urges all States to take all possible economic and other measures with a view of compelling South Africa to withdraw immediately from Namibia…reaffirms the rights of Namibian People to permanent sovereignty over their natural resources and condemns the policy of those States which continue to support foreign economic and other interests engaged in exploiting the natural and human resources of Namibia in some case to the point of foreseeing the exhaustion of such natural resources…”

This resolution imposed that no one should extract or exploit Namibian resources without explicit approval from the Security Council.

As is usually the case when an international legal instrument does not serve their economical interests, France, Germany and the UK simply ignored Resolution 3295.

“The Government of France, as many other Governments, does not recognize the legality of Resolution 3295,” said Jean-Francois Poncet, the Minister of Foreign affairs.

Members States of the European Union needed a safe supply of Uranium and their government would not let any human rights considerations interfere with an issue affecting their National Security.

Paris and Pretoria signed an agreement concerning the delivery of 1,000 tons of uranium per year beginning in 1980.

“South Africa offers long term uranium contracts without the usual constraints, i.e. very different from the usual rules of pacific use of nuclear energy,” said a spokesperson of Synatomein.

In February 1979, M. Brunner, Head of the Energy Department of the EU Commission admitted that EU member states import on average 30 percent of their uranium from Pretoria. He refused to tell which percentage originated from Namibia, although there is little doubt that most of it did.

In May 1981, France, Germany and the U.K. — as well as the United States — refused to participate in the International Conference concerning sanctions against South Africa.

Without these key countries on board, the sanctions were not worth the paper they were written on.

South Africa remained one of the top commercial partners of the European Union, at the same level as Canada. Apartheid continued.

The only European leader who stood on the right side of History was Olof Palme. And we know how he ended. Even if, his murder is still unsolved.

The CIA warned South Africa about the Guptas in 2009: report — Business Tech

CIA Warned South Africa About the Guptas in 2009. [Flashback : Uranium Sales During Apartheid]

This entry was posted in Uranium and tagged South Africa, Uranium. Bookmark the permalink.