“Some people are natural conspiracy theorists. I’m not. Maybe this is a weakness — an indication of a readiness to accept the official version of events and not to see evil plots lurking in the background. But after reading Miles Goslett’s masterful book about the supposed suicide of the weapons expert Dr David Kelly in 2003, I am more persuaded than ever that the authorities have not told us the whole truth about this tragic case.”

“We have lots of evidence … No coroner in the land would reach a verdict of suicide as Lord Hutton did.”

“After Kelly had committed suicide, one of the things that kept the whole thing going was Andrew [Gilligan]’s assurance that this was absolutely what Kelly had told him. It wasn’t until the Hutton inquiry itself that Andrew [Gilligan] finally conceded that this might not have been the case. (…) But it is sad that ten years on, we are still seeing a determination to shoot the messenger when scandals are exposed, rather than dealing with the substantive points raised.” 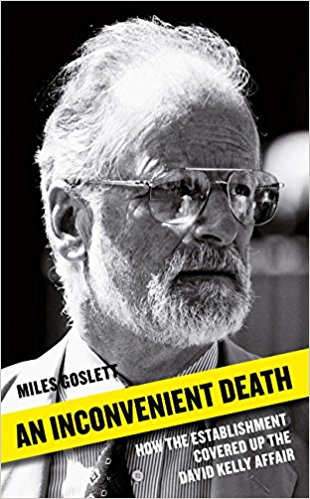 The death of Dr David Kelly in 2003 is one of the strangest events in recent British history. This scrupulous scientist — an expert on weapons of mass destruction — was caught up in the rush to war in Iraq. He felt under pressure from those around Tony Blair to provide evidence that Saddam Hussein was producing weapons of mass destruction. Dr Kelly seemed to have tipped into sudden depression when he was outed as a source for Andrew Gilligan. I do not know whether Kelly committed suicide or whether  he was suicided. Either way, it is rather obvious that Tony Blair is responsible for his death. Yet, it is Kelly who wrote Blair’s epitaph: “Here lies a liar.” Follow us on Twitter: @Intel_Today

RELATED POST: WORMWOOD — Seymour Hersh : “Frank Olson was a man profoundly distressed about what he was learning… And he was dangerous.”

Wormwood — Why Did The CIA Murder US Army Scientist Frank Olson?

The circumstances of Kelly’s death are replete with disquieting questions. Every detail, from his motives to the method of his death, his body’s discovery and the way in which the state investigated his demise, seems on close examination not to make sense.

There was never a full coroner’s inquest into his death, which would have allowed medical and other evidence to be carefully interrogated.

Book Review — An Inconvenient Death: How the Establishment Covered Up the David Kelly Affair

In this painstaking and meticulous book, Miles Goslett shows why we should be deeply sceptical of the official narrative and reminds us of the desperate measures those in power resorted to in that feverish summer of 2003.

“American and British forces invaded Iraq in March 2003. A few months later, Dr Kelly was a source — possibly not the main one — of Andrew Gilligan’s explosive BBC story that the Blair government had ‘sexed up’ the September 2002 dossier, which wrongly claimed Saddam Hussein possessed ‘weapons of mass destruction’.

It raises the question as to whether Gilligan himself may have sexed up what Dr Kelly had told him, since the scientist went to his death still believing these weapons might exist. But the journalist’s essentially accurate allegation caused panic and fury in official circles.

Dr Kelly soon admitted to his superiors that he had spoken to Gilligan. In one of the most disgraceful episodes in a shameful saga, a meeting chaired by Blair effectively authorised naming the weapons expert to the Press. Kelly became the centre of a media frenzy.

Two weeks later, on the morning of July 18, the poor man was found dead in an Oxfordshire wood, a few miles from his home.

He had apparently taken his own life, having gone for a walk the previous afternoon. His left wrist was cut, and he had taken co-proxamol tablets.

Some newspapers blamed Blair and Campbell for hounding him to his death. But did he kill himself?”

Fifteen years on, the death of Dr David Kelly remains an unsolved case. Doctors campaigning for a full inquest claim there has been a Hillsborough-style cover-up in the case. They want a fresh investigation.

“As doctors, we have multiple serious concerns about the medical, forensic and other evidence supporting the official story that Dr Kelly committed suicide.

We believe that there are serious deficiencies in the investigation of Dr Kelly’s death by Thames Valley Police.

In the interests of justice, both an inquest into Dr Kelly’s death and an Independent Police Complaints Commission investigation into what we consider to be a deficient and dishonest investigation by Thames Valley Police are required.

“The British public had to wait 23 years for the truth about the Hillsborough disaster to emerge.

It would be shameful if the truth about the suspicious death of Dr David Kelly were concealed for a similar length of time.”

In January of 2010, Lord Hutton ordered that all files relating to Dr Kelly’s post-mortem – including the autopsy report, unpublished medical and scientific records and photographs of the body – should remain secret for 70 years. Why on earth?

Book Review — An Inconvenient Death: How the Establishment Covered Up the David Kelly Affair