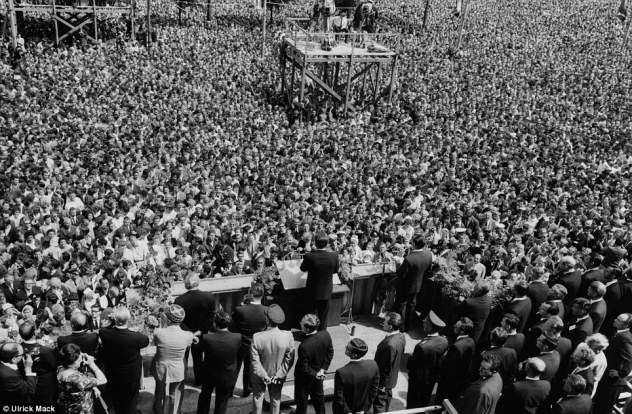 The speech is considered one of Kennedy’s best, both a notable moment of the Cold War and a high point of the New Frontier. It was a great morale boost for West Berliners, who lived in an enclave deep inside East Germany and feared a possible East German occupation. Follow us on Twitter: @INTEL_TODAY

RELATED POST: Who Is Who in World Intelligence and Security Agencies : BND ORGANIZATION CHART

Speaking from a platform erected on the steps of Rathaus Schöneberg for an audience of West Berliners, Kennedy said:

The Soviets were left to wonder: Was he now Kennedy the peacemaker or Kennedy the aggressor?

At any rate, treaty talks went ahead. And on July 26 Kennedy addressed the nation from the White House. Negotiations on a limited treaty had been successfully concluded in Moscow the day before.

The treaty prohibited all nuclear testing in the atmosphere, space, and underwater. Yesterday, Kennedy declared, a shaft of light cut into the darkness.

The pact was signed by American, British, and Soviet representatives on August 5. The Senate ratified it on September 23, and Kennedy signed it on October 7. Less than two months later he would be assassinated.

In 1989 free travel finally flowed between East and West Berlin. The wall came down. A concrete section was taken to the Kennedy Library in Boston and placed on public display.

And Kennedy’s words at the wall—like Ronald Reagan’s equally impassioned and provocative plea to “tear down this wall” 24 years later—live on far past the Cold War that provoked them. [American Heritage]

Kennedy – I am a Berliner – Ich Bin Ein Berliner