“The enigmatic Mr Megrahi had been the central figure of the [lockerbie] case for decades, reviled as a terrorist but defended by many Libyans, and even some world leaders, as a victim of injustice whose trial, 12 years after the bombing, had been riddled with political overtones, memory gaps and flawed evidence.”

“After writing about the “ravers” who regularly turn up at lectures to claim that President Bush/the CIA/the Pentagon/Mossad etc perpetrated the crimes against humanity of 11 September, I received a letter this week from Marion Irvine, who feared that members of her family run the risk of being just such ‘ravers’ and ‘voices heard in the wilderness’. Far from it. For Mrs Irvine was writing about Lockerbie, and, like her, I believe there are many dark and sinister corners to this atrocity. I urge anyone who is aware of government lies over Flight 103 to come forward.” 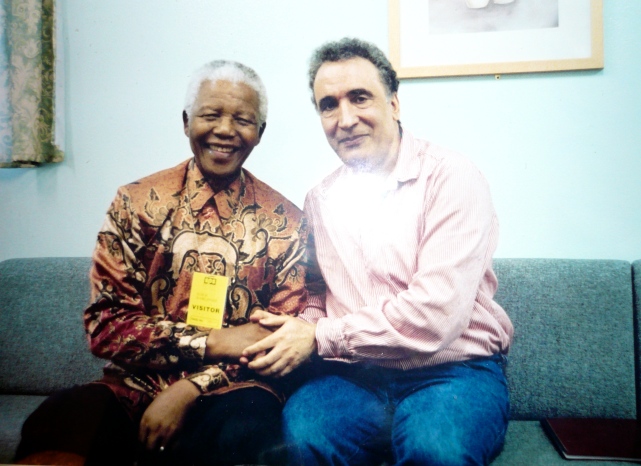 Mandela visiting Megrahi — aka the ‘Lockerbie bomber’ — in prison. Many thanks to my friend John Ashston who took the picture

Abdelbaset al-Megrahi — the only person ever convicted for the Lockerbie bombing — died on May 20 2012. His New York Times’ obituary was a bit of a surprise as the US Newspaper admitted — for the first time ever —  that the case against him was riddled with errors and false testimony. Follow us on Twitter: @INTEL_TODAY

Robert Parry was one of the rare journalists to point out the irony. Here is part of the piece he published on the website of Consortiumnews on May 21 2012.

Even in death, Libyan Ali al-Megrahi is dubbed “the Lockerbie bomber,” a depiction that proved useful last year in rallying public support for “regime change” in Libya. But The New York Times now concedes, belatedly, that the case against him was riddled with errors and false testimony.

From the Now-They-Tell-Us department comes The New York Times obit of Libyan agent Ali al-Megrahi, who was convicted by a special Scottish court for the 1988 Lockerbie bombing. After Megrahi’s death from cancer was announced on Sunday, the Times finally acknowledged that his guilt was in serious doubt.

Last year, when the Times and other major US news outlets were manufacturing public consent for a new war against another Middle East “bad guy,” ie Muammar Gaddafi, Megrahi’s guilt was treated as flat fact. Indeed, citation of the Lockerbie bombing became the debate closer, effectively silencing anyone who raised questions about US involvement in another war for “regime change.”

After all, who would “defend” the monsters involved in blowing Pan Am Flight 103 out of the sky over the Scottish town of Lockerbie, killing 270 people, including 189 Americans? Again and again, the US-backed military intervention to oust Gaddafi in 2011 was justified by Gaddafi’s presumed authorship of the Lockerbie terrorist attack.

Only a few non-mainstream news outlets, like Consortiumnews.com, bothered to actually review the dubious evidence against Megrahi and raise questions about the judgment of the Scottish court that convicted Megrahi in 2001.

By contrast to those few skeptical articles, The New York Times stoked last year’s war fever by suppressing or ignoring those doubts. For instance, one March 2011 article out of Washington began by stating: “There once was no American institution more hostile to Col. Muammar el-Qaddafi’s’s pariah government than the Central Intelligence Agency, which had lost its deputy Beirut station chief when Libyan intelligence operatives blew up Pan Am Flight 103 above Scotland in 1988.”

Note the lack of doubt or even attribution. A similar certainty prevailed in virtually all other mainstream news reports and commentaries, ranging from the right-wing media to the liberal MSNBC, whose foreign policy correspondent Andrea Mitchell would seal the deal by recalling that Libya had accepted “responsibility” for the bombing.

Gaddafi’s eventual defeat, capture and grisly murder brought no fresh doubts about the certainty of the guilt of Megrahi, who was simply called the “Lockerbie bomber.” Few eyebrows were raised even when British authorities released Libya’s former intelligence chief Moussa Koussa after asking him some Lockerbie questions.

Scotland Yard also apparently failed to notice the dog not barking when the new pro-Western Libyan government took power and released no confirmation that Gaddafi’s government indeed had sponsored the 1988 attack. After Gaddafi’s overthrow and death, the Lockerbie issue just disappeared from the news.

So, readers of The New York Times’ obituary page might have been surprised Monday if they read deep into Megrahi’s obit and discovered this summary of the case:

“The enigmatic Mr Megrahi had been the central figure of the case for decades, reviled as a terrorist but defended by many Libyans, and even some world leaders, as a victim of injustice whose trial, 12 years after the bombing, had been riddled with political overtones, memory gaps and flawed evidence.”

If you read even further, you would find this more detailed examination of the evidence:

“Investigators, while they had no direct proof, believed that the suitcase with the bomb had been fitted with routing tags for baggage handlers, put on a plane at Malta and flown to Frankfurt, where it was loaded onto a Boeing 727 feeder flight that connected to Flight 103 at London, then transferred to the doomed jetliner.

“After a three-year investigation, Mr Megrahi and Al-Amin Khalifa Fhimah, the Libyan airline station manager in Malta, were indicted on mass murder charges in 1991. Libya refused to extradite them, and the United Nations imposed eight years of sanctions that cost Libya $30 billion.  …

“Negotiations led by former President Nelson Mandela of South Africa produced a compromise in 1999: the suspects’ surrender, and a trial by Scottish judges in the Netherlands.

“The trial lasted 85 days. None of the witnesses connected the suspects directly to the bomb. But one, Tony Gauci, the Maltese shopkeeper who sold the clothing that forensic experts had linked to the bomb, identified Mr Megrahi as the buyer, although Mr Gauci seemed doubtful and had picked others in photo displays.

“The bomb’s timer was traced to a Zurich manufacturer, Mebo, whose owner, Edwin Bollier, testified that such devices had been sold to Libya. A fragment from the crash site was identified by a Mebo employee, Ulrich Lumpert.

“Neither defendant testified. But a turncoat Libyan agent testified that plastic explosives had been stored in Mr Fhimah’s desk in Malta, that Mr Megrahi had brought a brown suitcase, and that both men were at the Malta airport on the day the bomb was sent on its way.

“On Jan 31, 2001, the three-judge court found Mr Megrahi guilty but acquitted Mr Fhimah. The court called the case circumstantial, the evidence incomplete and some witnesses unreliable, but concluded that ‘there is nothing in the evidence which leaves us with any reasonable doubt as to the guilt’ of Mr Megrahi.

“Much of the evidence was later challenged. It emerged that Mr Gauci had repeatedly failed to identify Mr Megrahi before the trial and had selected him only after seeing his photograph in a magazine and being shown the same photo in court. The date of the clothing sale was also in doubt.

“Investigators said Mr Bollier, whom even the court called ‘untruthful and unreliable,’ had changed his story repeatedly after taking money from Libya, and might have gone to Tripoli just before the attack to fit a timer and bomb into the cassette recorder. The implication that he was a conspirator was never pursued.

“In 2007, Mr Lumpert admitted that he had lied at the trial, stolen a timer and given it to a Lockerbie investigator. Moreover, the fragment he identified was never tested for residue of explosives, although it was the only evidence of possible Libyan involvement.

“The court’s inference that the bomb had been transferred from the Frankfurt feeder flight was also cast into doubt when a Heathrow security guard revealed that Pan Am’s baggage area had been broken into 17 hours before the bombing, a circumstance never explored.

“Hans Köchler, a United Nations observer, called the trial ‘a spectacular miscarriage of justice,’ words echoed by Mr Mandela. Many legal experts and investigative journalists challenged the evidence, calling Mr Megrahi a scapegoat for a Libyan government long identified with terrorism. While denying involvement, Libya paid $2.7 billion to the victims’ families in 2003 in a bid to end years of diplomatic isolation.”

In other words, the case against Megrahi looks to have been an example of gross prosecutorial misconduct, relying on testimony from perjurers and failing to pursue promising leads (like the possibility that the bomb was introduced at Heathrow, not transferred from plane to plane to plane, an unlikely route for a terrorist attack and made even more dubious by the absence of any evidence of an unaccompanied bag being put on those flights).

Also, objective journalists should have noted that Libya’s much-touted acceptance of “responsibility” was simply an effort to get punishing sanctions lifted and that Libya always continued to assert its innocence.

All of the above facts were known in 2011 when the Times and the rest of the mainstream US press corps presented a dramatically different version to the American people. Last year, all these questions and doubts were suppressed in the name of rallying support for “regime change” in Libya.

On May 3 2018, the Scottish Criminal Cases Review Commission (SCCRC) announced that it has decided that it is in the interests of justice to accept a new application for a full review of Megrahi’s conviction.

SCCRC chief executive Gerard Sinclair said the Commission will examine the case to decide whether it would be appropriate to refer the matter for a fresh appeal.

Published on December 17, 2013 — The Lord Advocate Frank Mulholland has announced Libya has appointed two prosecutors to assist the international investigation into the Lockerbie bombing.

This weekend it will be 25 years since Pan Am 103 was blown up over Lockerbie, killing 270 people. Two leading Scottish lawyers joined Scotland Tonight to discuss the case.

NOTE: The “Lockerbie Trial Briefing Unit” was set up to “inform” the journalists covering the case. Among the distinguished Law Professors serving on the unit, one of them — Andrew Fulton — had never been Law School Professor and was in fact a former MI6 officer.