US Secretary of State Mike Pompeo: “War on Terror as a Cosmic Divine Battle”

“History, I believe, furnishes no example of a priest-ridden people maintaining a free civil government. This marks the lowest grade of ignorance of which their civil as well as religious leaders will always avail themselves for their own purposes.” 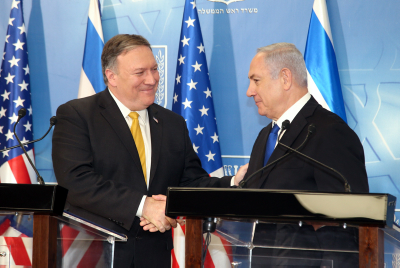 Israeli prime minister Benjamin Netanyahu holds a joint press conference with US Secretary of State Mike Pompeo at the Ministry of Defense in Tel Aviv on April 29, 2018.

Mike Pompeo — the previous CIA Director and the current US Secretary of State — views politics as a struggle mankind must endure until the “Rapture” comes. If recent events appear to cast some doubts on Pompeo’s ability to act rationally in the best interests of the United States and its allies, it is because this Secretary of State does not act according to reason. Pompeo’s decisions are guided by his belief in a ‘divine mission’. And that is spooky. Follow us on Twitter: @Intel_Today

Last month,  Vox reported that “Pompeo’s specific brand of evangelical Christianity, with its insistence on seeing Muslim-Christian relations as an apocalyptic holy war, makes him an unnerving choice for such a senior foreign policy position.”

“During his tenure as CIA director, and before that as a member of the House of Representatives, Pompeo has consistently used language that casts the war on terrorism as a cosmic divine battle of good and evil.

He’s referred to Islamic terrorists as destined to ‘continue to press against us until we make sure that we pray and stand and fight and make sure that we know that Jesus Christ is our savior is truly the only solution for our world.’

Sources inside the CIA told Foreign Policy that Pompeo’s speeches within the CIA are no less loaded with explicitly religious language.”

If you wish to understand Pompeo’s views of the world —  from his unconditional support to Israel to his deep-seated hate of Iran — you can not ignore his rather peculiar ‘religious’ beliefs. This is the key to decode his moves on the geopolitical chess board.

Politics is “a never-ending struggle … until the rapture.”

Mike Pompeo Talks About the Rapture Inside the CIA — NCRM

US Secretary of State Mike Pompeo: “War on Terror as a Cosmic Divine Battle”

This entry was posted in CIA and tagged CIA, Mike Pompeo. Bookmark the permalink.