“Appropriate permits were not submitted to the Belgian Customs.” 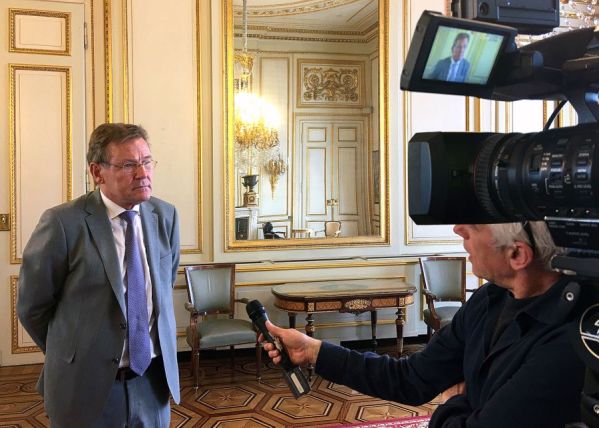 Belgian Finance Minister Johan Van Overtveldt : “The export of the product began in 2010, when it was still legal. They were destined at the time, and also later, for the painting industry.”

Three Belgian companies are accused of illegally exporting chemicals to Syria. The goods exported include 168 tons of isopropanol, a common substance that can be used in the production of sarin nerve gas. Follow us on Twitter: @Intel_Today

Since the entry into force of the EU sanctions in September 2013, companies need a license to export such chemicals to Syria.

Belgian chemical group AAE Chemie — and two handling agents, Danmar Logistics and Anex Customs — had no such license for the chemical substances they exported  to Lebanon and Syria between 2014 and 2016.

The opening session of the lawsuit at the Antwerp Criminal Court is set for 15 May 2018.

The case is quite murky. The companies argue that they acted in ‘good faith’ and they blame the customs for their outdated information system. They have rejected a ‘friendly settlement’ out of court.

At the same time, a senator claims that the Belgian government has long been  aware of the facts. It would also appear that French Intelligence had documented these exports since 2014.

The organization for the Prevention of Chemical Weapons (OPCW) has concluded that isopropanol was used in the manufactured of the Sarin used in the Khan Shaykhun attack of April 2017. (Letter dated 26 October 2017 from the Secretary-General addressed to the President of the Security Council)

“Environmental samples were collected in Khan Shaykhun both from inside the crater and from its surroundings. The results of the analysis carried out by OPCW designated laboratories confirm the presence of sarin and some of its known degradation products.

Moreover, the results confirm that sarin was produced by the binary route, in which DF is combined with isopropanol (iPrOH) in the presence of hexamine.”

In the context of the Salisbury incident, we have learned how the Spiez Lab scientists were able to conclude that the Sarin used in the 2016 attack in Kahn Shaykhun was part of the Syrian military arsenal.

“Exports of isopropanol need a special license only if it exceeds a density threshold. It is up to the court to rule on that. It is an important detail,” the minister said.

It is indeed a very important point and the Belgian minister is simply dead wrong about it.

The legal instrument does not refer to the density but to the “concentration” — sometimes described as purity — of the chemical.

The Council Regulation (EU) No 36/2012 of 18 January 2012 imposes certain restrictions on the export of specific equipment, goods and  technology to Syria.

Article 2b states that:

The list set out in Annex IX does not include products identified as consumer goods packaged for retail sale for personal use or packaged for individual use, with the exception of isopropanol.

Isopropanol is explicitly listed and restrictions do apply if, and only if, its  concentration equal or greater than 95 %.

Belgium probing if chemical was illegally exported to Syria

Finance Minister Johan Van Overtveldt told The Associated Press the case against the companies is to come to court on May 15 for opening proceedings in the port city of Antwerp.

He added that the case centers on whether and how illegal products were exported between 2014 and 2016 despite the sanctions against the regime of President Bashar Assad.

The Belgian court case will center on the possible export of 168 metric tons of isopropanol and tons more of three other products to Syria and Lebanon after that.

“The subpoena alleges that these firms have exported the chemical products without the proper license, without the export license,” Antwerp court media judge Ronald Cassiers said.

Van Overtveldt said, though, that exports of isopropanol needed a special license only if it exceeded a density threshold, and it was up to the court to rule on that. “It is an important detail,” he said.

An official at Danmar Logistics told the AP that he did not dispute that such products had been exported but insisted they had been checked and released by Belgian customs for exports.

The official spoke on condition of anonymity because of the ongoing investigation. “I don’t know what they can hold against us,” the official said.

The complaint before the Antwerp court was brought by the Belgian customs office.