“We gather here today in recognition of Women’s History Month.  At this time, it seems only fitting that we remember our own.We honor today four of our women who made that supreme sacrifice: Barbara A. Robbins, Phyllis Nancy Faraci, Monique N. Lewis, and Deborah Marie Hixon.”

Tribute to Women Who Have Died

“They devoted their hearts and minds to a mission unlike any other, at an agency unlike any other, serving on the world’s most dangerous frontiers to defend our people, defeat our adversaries, and advance our freedoms. Their words and deeds will inspire us forever, and their service and sacrifice will never be forgotten.”

The Memorial Wall is a memorial at the Central Intelligence Agency headquarters in Langley, Virginia. It honors CIA employees who died in the line of service. There are 125 stars carved into the white Alabama marble wall. [WIKIPEDIA]. At least ten represent women. Follow us on Twitter: @Intel_Today

Monique Lewis was just hours into her first day as a CIA officer when a suicide bomber attacked the U.S. Embassy in Beirut in 1983. Her husband, James Lewis, a paramilitary officer there, was also killed.

“Monique  Lewis married an Agency employee and both were sent to Beirut. Monique told Agency friends how delighted she was at the prospect of working with her husband.

Tragically, Monique and her husband were killed— the first time that both a husband and wife employed by the Agency have died while in the service of the CIA.

Monique and James Lewis were only acknowledged as CIA employees in 2012.” 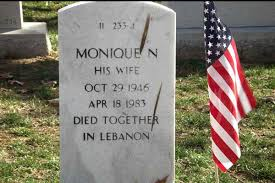 PS: Did you know Monique Lewis? I was not able to locate a picture. Can you help? Would you like to share a story? Just let us know.

During the Agency’s annual memorial ceremony on Monday, May 23, (2011) Director Leon E. Panetta paid tribute to the first American woman killed in the Vietnam War.

Women of the CIA — Newsweek

The Mystery of Jane Wallis Burrell: The First CIA Officer To Die in the Agency’s Service — CIA news & Information

Tribute to Women Who Have Died — STUDIES IN INTELLIGENCE

Who was Elizabeth Hanson? — COLBY Magazine