“I am pleased that, in this way, many senior intelligence professionals take the opportunity of the MSC to discuss important security questions. Such personal meetings and intensive exchange of expertise are not only essential for diplomats, but also for intelligence agencies.” 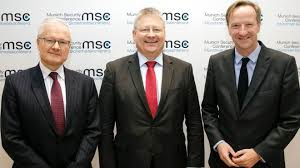 February 16 2018 — Munich — In an unprecedented joint statement, the current directors of the British, French and German foreign intelligence agencies have called for a continued security co-operation after the UK leaves the EU. In her speech (and following answers raised by members of the audience), Theresa May said that the UK wants to negotiate a “Special Treaty on Security Issues”. The British PM appears to suggest that a co-operation on intelligence matters could be traded for economic advantages.  Follow us on Twitter: @Intel_Today

RELATED POST: Who Is Who in World Intelligence and Security Agencies : DGSE ORGANIZATION CHART [UPDATE — September 2017]

The Heads of Germany, France and the UK’s foreign intelligence services met for discussion shortly before the opening of the Munich Security Conference. They released a joint statement published on the BND official website.

“The President of the Bundesnachrichtendienst (BND), Dr Bruno Kahl, the Directeur Général de la Sécurité Extérieure (DGSE), Bernard Émié, and the Chief of the Secret Intelligence Service MI6 (SIS), Alex Younger, came together for a trilateral meeting in Munich.

The three Service Heads are united in the view that modern threats require a modern response, any failure to do so would lead to even greater risk.

To have effect, our efforts must be combined in partnership.

The agencies are capable services; they make a powerful contribution. Cooperation between European intelligence agencies combined with the values of liberal democracy is indispensable, especially against a background of diverse foreign and security policy challenges.

Even after the UK’s exit from the EU, close cooperation and cross-border information sharing must be taken forward on themes such as international terrorism, illegal migration, proliferation and cyber attacks.”

The unprecedented public show of unity is clearly intended as a rejection of Prime Minister Theresa May’s earlier stance on the issue.

In early 2017, the British PM shocked the Intelligence world when she tried to link British security cooperation to a post-Brexit deal on free trade.

Her Article 50 letter sent in March 2017, which triggered the Brexit talks, mentioned “security” 11 times and included the line that “failure to reach agreement would mean our cooperation in the fight against crime and terrorism would be weakened.” [Bloomberg]

Theresa May’s Speech at the MSC

In her speech (February 17 2018), May said the UK would remain committed to Europe’s security after Brexit. The PM called for a new “deep and special partnership” between the EU and the UK to ensure their security.

The UK is scheduled to leave the European Union in March 2019. Once out of the EU, the UK will no longer have a close co-operation with the European Intelligence Agencies.