“Gina is an exemplary intelligence officer and a devoted patriot who brings more than 30 years of Agency experience to the job. She is also a proven leader with an uncanny ability to get things done and to inspire those around her. We are fortunate that someone of her intellect, skill, and experience will be our Deputy Director. I know she will do an outstanding job, and I look forward to working with her closely in the years ahead.”

“I am especially concerned by reports that this individual [Gina Haspel] was involved in the unauthorized destruction of CIA interrogation videotapes, which documented the CIA’s use of torture against two CIA detainees. My colleagues Senators Wyden and Heinrich have stated that classified information details why the newly appointed Deputy Director is ‘unsuitable’ for the position and have requested that this information be declassified. I join their request.” 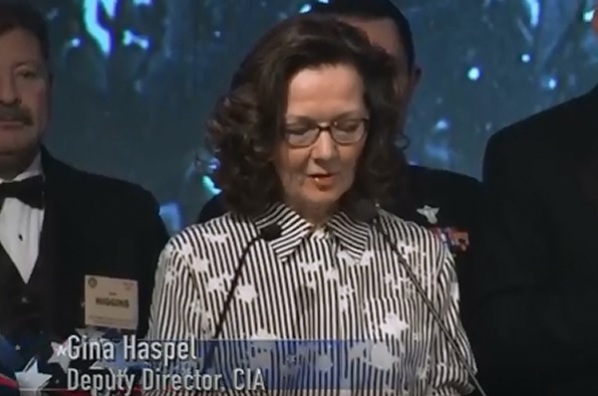 Gina Cheri Haspel (born October 1 1956) is an American intelligence officer. She joined the Central Intelligence Agency in 1985. In February 2017 she was appointed by President Donald Trump as Deputy Director of the CIA. She is the “first female career CIA officer” to receive that appointment, although she is the second woman, as Avril Haines had been appointed by Barack Obama in 2013. Haspel ran a “black site” CIA prison located in Thailand in 2002.

February 2 2017 — Gina Haspel is the first female career CIA officer to be named deputy director. Haspel has an extensive overseas experience, including several stints as chief of station at outposts abroad. In Washington, she has held several top senior leadership positions. Follow us on Twitter: @Intel_Today

RELATED POST:CIA Director Mike Pompeo — Who Is Who in World Intelligence and Security Agencies?

Ms. Haspel is a career intelligence officer, having joined the CIA in 1985. She has extensive overseas experience and served as Chief of Station in several of her assignments.

The appointment of Ms. Haspel as DDCIA is not too much of a surprise. In November 2016, I suggested that the job would be given to someone from the Clandestine Service. I had also suggested that a woman could be selected for the top job. Here is what I wrote:

“Naming a deputy director is considered critical. Traditionally, when an outsider like Pompeo is named CIA director, the deputy director tends to be an insider, a current or former CIA officer, usually from the clandestine services.”

I will not comment on her career today. I will just post the CIA official press release.

“Ms. Haspel is the recipient of numerous awards including the George H. W. Bush Award for excellence in counterterrorism; the Donovan Award; the Intelligence Medal of Merit; and the Presidential Rank Award, the most prestigious award in the federal civil service.

Below is a list of statements regarding her selection from officials who have worked directly with Ms. Haspel.

“As a CIA officer of 47 years, I can say without reservation that Gina Haspel has my strongest support in her appointment as Deputy Director. A deeply experienced clandestine officer who has held senior positions both at home and abroad, Ms. Haspel is not only an outstanding operations officer, but also a recognized program manager and an exceptional leader.  She has selflessly dedicated her life to the Agency and to the security of the nation.  CIA officers and Intelligence Community leaders writ large will applaud her selection.”

“I am very pleased to learn of Director Pompeo’s selection of Gina Haspel as Deputy Director. It speaks well of him for picking a seasoned veteran of the Agency who is widely and deeply respected by the workforce as well as those outside the Agency. She has the broad-gauged experience from both foreign and domestic assignments to serve as the right-arm for Director Pompeo. I am particularly gratified, since she has also been a strong proponent for integration, not only within CIA, but across the Intelligence Community.”

“What a wonderful choice for Deputy Director, one that will be celebrated by current and former Agency officers alike. Ms. Haspel has responded with dignity, professionalism and honor to everything the Agency and nation have asked her to do. I am sure that she will be for Director Pompeo what Steve Kappes was for me — a trusted friend, lieutenant and guide to the sometimes opaque corridors of American espionage.”

“A person of great honesty and integrity, Gina Haspel is a highly skilled Agency professional who has a complete understanding of all the parts of the intelligence business. Given her vast experience both at home and abroad, she is able to work effectively and collaboratively across the many elements of the National Security establishment. She is mission-focused, leads actively and never shies away from the difficult tasks. To these tasks, she also brings creativity and a sense of innovation, both of which will be important in a fast-changing world. Gina Haspel is an excellent choice to fill the Deputy’s role and support the new Director in his movement forward.”

“Gina Haspel is an outstanding choice for Deputy Director. She is a seasoned, collaborative officer of great integrity who will be a tremendous partner for Director Pompeo in leading CIA.”

“I applaud the appointment. Ms. Haspel will serve Pompeo, the Agency, and her country extremely well. She is widely respected throughout the Agency, and she will be welcomed in the new job by both current and former employees. I worked closely with Haspel from 2006 until my retirement from the Agency in 2013. During that time, I found her to be simply exceptional. She provides advice based on facts and analysis of facts. She gets things done in a quiet, yet effective way, and she is calm under fire. She appreciates the work of all CIA officers – analysts, scientists, and support specialists, as much as she appreciates operations officers.”

“I have had the privilege to work with Ms. Haspel during challenging and intense times for our nation’s security. She is an exceptional leader, patriot and consummate professional. She showed the savvy and grit needed in difficult situations that has garnered respect of colleagues and adversaries alike. Her commitment to the mission and rule of law are unparalleled.”