One Year Ago — The “STARGATE Project”: The CIA Psychic Spies

“Our mission – that is, the mission for INSCOM Center Lane Program’s remote viewing project number 8404 – was to help find Buckley [William Francis Buckley, station chief for the CIA in Beirut Lebanon] before it was too late. The CIA officer was kidnapped on March 16, 1984. Our tasking arrived on March 20th. Over the next few weeks 12 remote viewing sessions were worked. The majority were performed by the two most experienced viewers in the unit at the time, Joe McMoneagle and Tom McNear. By the time Project 8404 was finished, a number of detailed remote viewing results of unknown accuracy were produced. Sadly, all this work was to no avail. Buckley was never rescued, and died in captivity on June 3 1985.” 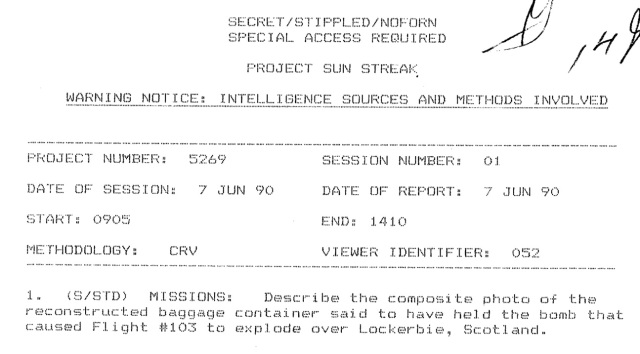 January 29 2017 — The Stargate Project was the code name for a secret U.S. Army unit established in 1978 at Fort Meade, Maryland, by the Defense Intelligence Agency (DIA) and SRI International (a California contractor) to investigate the potential for psychic phenomena in military and domestic intelligence applications. Follow us on Twitter: @Intel_Today

RELATED POST: WORMWOOD — Seymour Hersh : “Frank Olson was a man profoundly distressed about what he was learning… And he was dangerous.”

Turner generated a major controversy when he admitted publicly in the late 1970s to having used a psychic to try to locate an aircraft that had crashed in Zaire and could not be found by spy satellites. — END of UPDATE

The Project, and its precursors and sister projects, went by various code names — GONDOLA WISH, GRILL FLAME, CENTER LANE, SUN STREAK, SCANATE — until 1991 when they were consolidated and rechristened as “Stargate Project”.

Stargate Project work primarily involved remote viewing, the purported ability to psychically “see” events, sites, or information from a great distance. The project was overseen until 1987 by Lt. Frederick Holmes “Skip” Atwater, an aide and “psychic head-hunter” to Maj. Gen. Albert Stubblebine, and later president of the Monroe Institute. The unit was small-scale, comprising about 15 to 20 individuals, and was run out of “an old, leaky wooden barracks”.

The Stargate Project was terminated and declassified in 1995 after a CIA report concluded that it was never useful in any intelligence operation. Information provided by the program was vague, included irrelevant and erroneous data, and there was reason to suspect that its project managers had changed the reports so they would fit background cues. The program was featured in the 2004 book and 2009 film entitled The Men Who Stare at Goats, although never mentions it by name. [WIKIPEDIA]

Remote viewing (RV) is the practice of seeking impressions about a distant or unseen target, purportedly using extrasensory perception (ESP) or “sensing with mind”.

Remote Viewing experiments have historically been criticized for lack of proper controls and repeatability. There is no credible evidence that remote viewing exists, and the topic of remote viewing is generally regarded as pseudoscience.

A Measure of Last Resort

Ingo Douglas Swann helped develop the process of remote viewing at the Stanford Research Institute in experiments that caught the attention of the Central Intelligence Agency.

Swann is commonly credited with proposing the idea of controlled remote viewing, a process in which viewers would view a location given nothing but its geographical coordinates, which was developed and tested by Puthoff and Targ with CIA funding.

the CIA was not just simply interested in investigating this phenomenon. They were interested into the possibility of its use in the intelligence world.

In its heyday, this project has research laboratories and 14 units throughout the U.S. and at least 22 remote viewers who worked to provide intelligence.

The project is considered as a last resort in the American intelligence community and the “viewers” will only be assigned if all other efforts have been tried and failed.

The mission of Project n° 5269 was to identify the location of the bomb that destroyed Pan Am 103 over Lockerbie on 21 December 1988. This ‘Remote Viewing’ project concluded that the bomb was sitting on the floor of the luggage container.

There can be no doubt that “Remote Viewing” is pseudo-science. But some ‘scientists’ have managed ‘forensic works’ that hardly amount to anything  more credible.

The forensic work on the Pan Am 103 disaster appears to be a case in point.

On the very first page of his forensic notes (December 27 1988), Dr Hayes concluded from the location of the “pitting” that the locus of the explosion was well above and on the “right side” of the outboard pallet frame. (He estimated the angle was about 45°.) 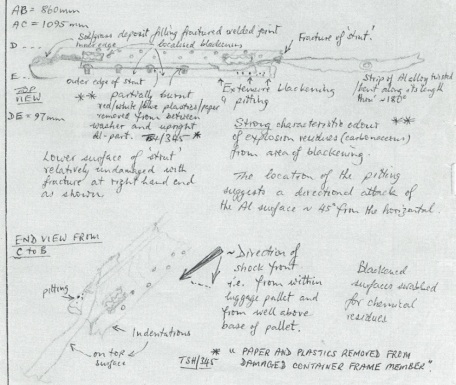 Some time later, Dr Hayes concluded that the “Primary luggage” had been sitting directly on the floor of the container.

And the final report concluded that the “Primary Luggage” was actually on the second layer, as possibly indicated in the following picture.

In the final analysis, the locus had moved to the “left side” of the same pallet frame and 25 cm above the floor level! 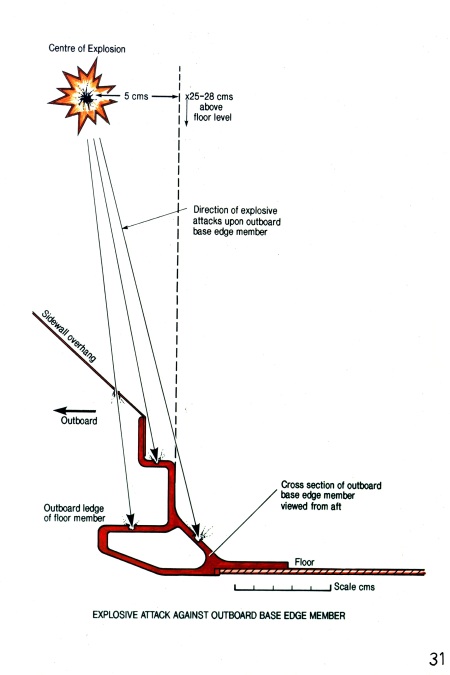 Perhaps, it should not be too surprising that the CIA requested help from the STARGATE team in order to locate Buckley.

Indeed, while considering a rescue operation, the Agency even bought a blueprint of the sewage system belonging to a part of Beirut that does not have any…. (Would you like to participate in a rescue op based on this kind of ‘Intel’?)

So indeed, in this case, STARGATE was a measure of last resort. But why on earth would the CIA rely on ‘remote viewers’ to locate the position of the ‘Lockerbie bomb’?

One Year Ago — The “STARGATE Project”: The CIA Psychic Spies