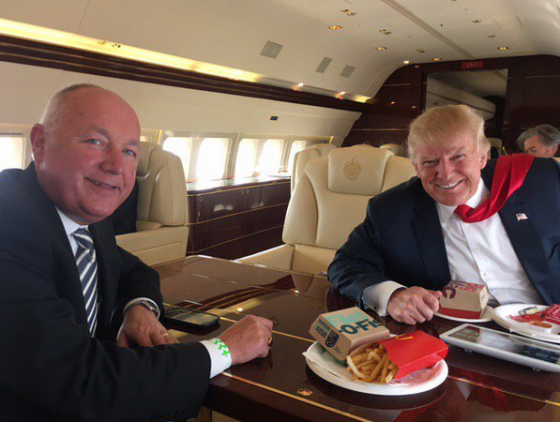 Pete Hoekstra and Donald Trump during the campaign

In an interview with a Dutch reporter, US Ambassador to the Netherlands Peter Hoekstra denied a comment he made in 2015 about the “Islamic movement,” calling it fake news. Then he denied his denial. Follow us on Twitter: @INTEL_TODAY

UPDATE (January 12 2018) — On first day in the job (January 10 2018), Ambassador Pete Hoekstra clashed with journalists over controversial comments he made in 2015.

Hoekstra said the ‘Islamic movement’ was creating chaos in Europe and claimed that Dutch politicians had been burned. In his first news conference, Hoekstra was asked to name one of these politicians.

The new US ambassador in the Netherlands said he did not want to revisit the issue.  As Dutch reporters kept pressing — unsuccessfully — for a clarification, one told him: “This is the Netherlands, you have to answer questions.”

In an interview with the news program Nieuwsuur, Peter Hoekstra had denied making controversial statements about so-called “no-go zones” in 2015, when he claimed cars and politicians were being burned in Muslim neighborhoods in Europe.

“I didn’t say that. That is actually an incorrect statement. Yeah, we would call it ‘fake news.’”

Seconds later, Hoekstra appeared to deny having denied what he said.

“I made certain remarks in 2015 and regret the exchange during the Nieuwsuur interview. Please accept my apology.”

Pete Hoekstra was at one point seriously considered to become the CIA Director before Trump finally picked Pompeo. Here is what I wrote on November 17 2016.

“The choice of Pete Hoestra is a bit weird. And not so because Hoekstra is a foreign-born politician.

This has happened before. QUIZ: Can you name the only foreign-born director of the CIA? (DCI and/or D/CIA)? Here is the answer.

In truth, the choice is odd for the following reasons.

For one, it goes against Trump’s promise to “drain the swamp” as Hoekstra is a very busy lobbyist with well-known interests in countries such as Belarus, Turkey (Kurds) and Libya.

Second, While Trump has been very vocal about the Iraq Intelligence Fiasco (Not an unreasonable stance per se) , Hoekstra is known for having produced some of the worst analysis reports on WMDs.

Third, it is getting VERY worrisome. With folks like (…) Mike Flynn as National Security Advisor and Hoekstra at the CIA, one can safely expect the worst…”