Former MI6 Chief: “Brexit Will Cause Loss of Influence”

“We have to acknowledge that Brexit is damaging our economy at the moment. (…) The EU solidarity issue is now in play and I am afraid we will lose it.” 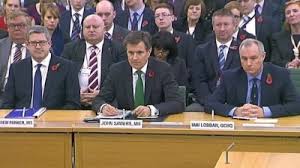 Sir John Sawers told MPs that Britain will need to figure out how to rebuild its economy after leaving the EU. The former MI6 Boss also explained that the UK will have to rebuild its  international standing. The first goal may not be unrealistic. The latter could turn out to be very tricky. Follow us on Twitter: @INTEL_TODAY

RELATED POST: Who Is Who in World Intelligence and Security Agencies : MI6 Alex Younger [2017]

Sir Robert John Sawers (born 26 July 1955) is a former British diplomat and senior civil servant. Sawers was the British Permanent Representative to the United Nations from August 2007 to November 2009. He was Chief of the Secret Intelligence Service (MI6) from November 2009 until November 2014.

Sawers is currently the Chairman of “Macro Advisory Partners”, a firm that provides strategic advice and insights to investors and governments. He is also a Visiting Professor in the Department of War Studies at King’s College London. Sawers is a member of the Steering Committee of the Bilderberg Conferences and participated in all these conferences since 2014.

In a recent speech to the foreign affairs select committee, Sawers had harsh but realistic words regarding the consequences of the Brexit.

“We can see the trend of the coming years and we do not want to go through a repeat of the 1970s where the UK went progressively downhill compared to our national partners.

We will need to turn it around. I am not sure how we are going to do it.

We have to acknowledge that Brexit is damaging our economy at the moment. Immediately after Brexit we suffered a 15% devaluation in our currency – we devalued all the assets in the UK by 15%.

We are going through a Brexit inflation at the moment which means that people’s pay rises are not enough to keep up with real-terms incomes and, having 18 months ago been at the top of the G7 table of GDP growth performance, we are now at the bottom, so we are undoubtedly going through a bit of a dive.

At the end of this process we will need to work out how to rebuild our economy and our influence in the world.

For the last 25 years our foreign policy has been closely tied up with working closely with our international partners, especially France and Germany.  (…)

At the same time, the US had become a less reliable partner, making the international system less effective than in the past.”

Brexit will cause loss of influence on scale of 1970s, says ex-MI6 chief

Brexit will cause loss of influence on scale of 1970s, says ex-MI6 chief  — Guardian

Former MI6 Chief: “Brexit Will Cause Loss of Influence”