“We found something very important to the focus of our mission, something threatening near the building.”

“This is not your average workers’ compensation claim case, like someone falling while they were working on the roof of a government building. How often is it that a foreign government attacks a federal employee with devastating microwaves?” 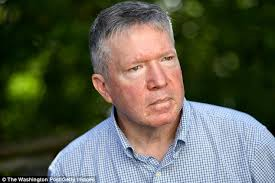 Mike Beck — a former US National Security Agency officer — believes that a weaponized microwave attack caused the Parkinson’s disease that is now slowly killing him 10 years later. And — to the best of my knowledge — he may very well be right about this! Follow us on Twitter: @INTEL_TODAY

Mike Beck is a former Secret Service officer. He joined the NSA in 1987. Beck was accustomed to working in hostile terrain. His job was to made sure that U.S. facilities around the world could protect intelligence in physical spaces known as SCIFs (“sensitive compartmented information facilities).

In 2006, at the rather young age of 46, Mike Beck was diagnosed with Parkinson’s disease. (Only about 10 percent of those diagnosed with the illness are younger than 50.)

Charles W. Gubete — an NSA colleague who spent a critical week with Beck  in a hostile country more than twenty years ago (1996) — has also been diagnosed with Parkinson’s disease. Gubete — who lived in Laurel, Md. — died from a cause that remains unknown.

According to a classified intelligence report, Beck and his co-worker were likely the victims of a “covert microwave attack”.

“Beck believes that while he and his colleague were sleeping in their hotel rooms, the hostile country, which he cannot name for security reasons, deployed a high-powered microwave weapon against them, damaging their nervous systems.

‘I was sick in the stomach and shocked when I read that report,’ said Beck, who now struggles to drive, fold the laundry, clean the dishes, or get deep sleep.

I am familiar with other things this hostile country does, and it just felt raw and unfair.”

Glenn Gerstell, the NSA’s general counsel, said the agency has not found any proof that Beck or his co-worker were attacked.

Absent evidence, the NSA can’t tell the Labor Department whether it agrees or disagrees with Beck’s claim, he said.

“We have tremendous sympathy for him, and we’d like to try and help him. But we can’t manufacture evidence,” Gerstell said.

“If the Department of Labor asked us, ‘Do you think this is a possibility?’ then that would be different. But they didn’t ask that.”

Paul Fishman, a professor of neurology at the University of Maryland School of Medicine, believes that it is possible that the microwave weapon could have helped cause both men’s neurological damage.